Obama: "We Can Be Better"

President asks Arizona and the nation to reflect, reveals that U.S. Rep. Gabrielle Giffords has opened her eyes by Gisela Telis Tweet 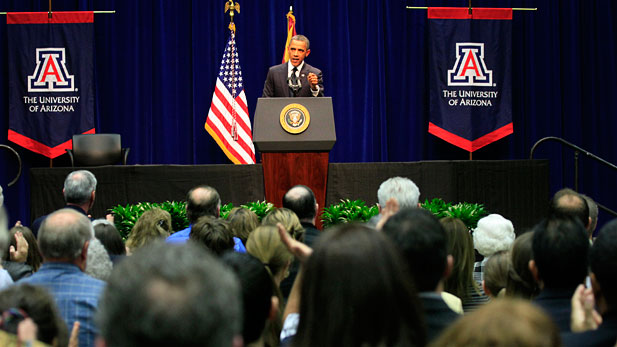 By early morning, the crowd spilled off the University of Arizona Campus and into the surrounding streets. More than 26,000 people turned out Wednesday to hear President Barack Obama pay tribute to the victims of Saturday's shooting, and they found themselves witnesses to a call for reflection--and the first to hear some unexpected good news.

During "Together We Thrive: Tucson and America," a public memorial for the victims of gunman Jared Lee Loughner, whose assassination attempt on U.S. Representative Gabrielle Giffords left 6 dead and 14 injured, Obama revealed that the Congresswoman had opened her eyes for the first time since the shooting.

The revelation was a high point in an emotionally charged ceremony. Daniel Hernandez, the intern and University of Arizona junior who tended Giffords' wound and helped save her life, said he would "humbly reject" the title of hero and drew attention to the "glimmers of hope" that emerged from the tragedy.

Governor Jan Brewer followed, speaking briefly about each of the six deceased victims and of a crime that "pierced our sense of well-being ... raised questions of which we can make no sense, questions begging for answers that will not come anytime soon."

"Bound by faith," the state would recover and move forward with hope, the governor said.

Faith figured prominently in the memorial, as several speakers quoted Scripture. Brewer's predecessor, Secretary of Homeland Security Janet Napolitano read from the book of Isaiah, while Attorney General Eric Holder quoted the Second Letter of Paul to the Corinthians.

Obama took time to eulogize each of the victims and recognized those who acted to wrestle away Loughner's ammunition and subdue him. Their heroism "poses a challenge for each of us," the President said. "How can we honor the fallen?"

Obama called for a paradigm shift, cautioning the American people to turn away from blame.

"At a time when we are all too eager to lay the blame for all that ails the world at the feet of those who happen to think differently than we do," he said, "it's important for us to pause for a moment to make sure that we're talking to each other in a way that heals, not in a way that wounds."

"What we cannot do is use this tragedy as one more occasion to turn on each other," he said. "The loss of these wonderful people should make every one of us strive to be better."

President Barack Obama along with other invited guests began the healing process with the people of Tucson, the nation, and the world to honor Congresswoman Gabrielle Giffords and the many others  who were injured or lost in Saturday’s tragic shooting at the University of Arizona's "Together We Thrive: Tucson and America" event on wednesday night.

Tucson City Council passes resolution supporting abortion rights Has "Star Trek" changed the world? Author Ryan Britt examines a legacy of 50 years and beyond. A grassroots Tucson baker wins a national award for excellence.
By posting comments, you agree to our
AZPM encourages comments, but comments that contain profanity, unrelated information, threats, libel, defamatory statements, obscenities, pornography or that violate the law are not allowed. Comments that promote commercial products or services are not allowed. Comments in violation of this policy will be removed. Continued posting of comments that violate this policy will result in the commenter being banned from the site.