The UA instrument's find could be a boon for future human exploration. by Sara Hammond Tweet 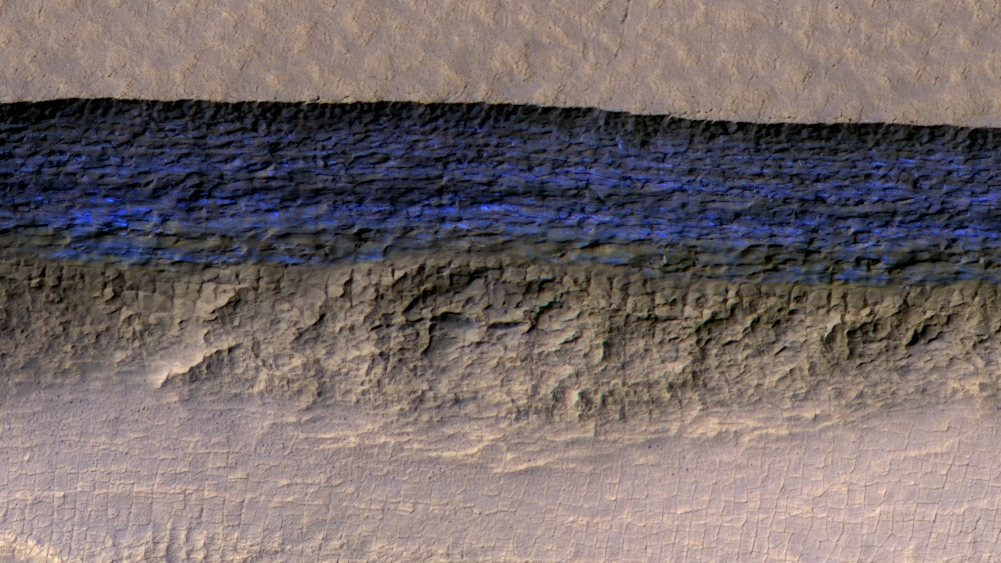 A cross-section of a thick sheet of underground ice is exposed in this enhanced-color view from the High Resolution Imaging Science Experiment (HiRISE) camera on NASA's Mars Reconnaissance Orbiter.
NASA,JPL-Caltech, University of Arizona, USGS

A University of Arizona-run camera orbiting Mars has detected ice a few meters under the planet's surface. That bodes well for future human exploration.

It's not a surprise that there's ice on Mars. But UA planetary scientist Shane Byrne said its location in cliffs so close to the surface at the mid-latitudes makes it an important source of water when humans explore the planet.

"Now what we've seen with this discovery and some other over the previous year, is that there is plenty of ice there just below the surface, and these cliffs show the ice really reaching almost all the way up to the surface," Byrne said. "It's just a thin layer of dirt on top of the ice so an astronaut with a bucket and a shovel can collect all the water they would ever need. That's going to be a boon for future explorers."

Byrne said scientists don't know what's causing the cliffs to actively retreat and expose the ice, but it's an ongoing process that the UA's HiRISE camera has been documenting.

The exposed ice reveals new information about the ice sheets' layers and structure, and the planet's climate history, Byrne said.

UA Mars Camera Watching Dust Storm From Orbit UA Scientists Expect Bright Discoveries From Solar Satellite Scientists Discover Liquid Lake Under Mars Ice
By posting comments, you agree to our
AZPM encourages comments, but comments that contain profanity, unrelated information, threats, libel, defamatory statements, obscenities, pornography or that violate the law are not allowed. Comments that promote commercial products or services are not allowed. Comments in violation of this policy will be removed. Continued posting of comments that violate this policy will result in the commenter being banned from the site.