× CORONAVIRUS: The latest coverage and local resources regarding COVID-19 from the Arizona Public Media newsroom.
/ Modified may 25, 2017 2:52 p.m. 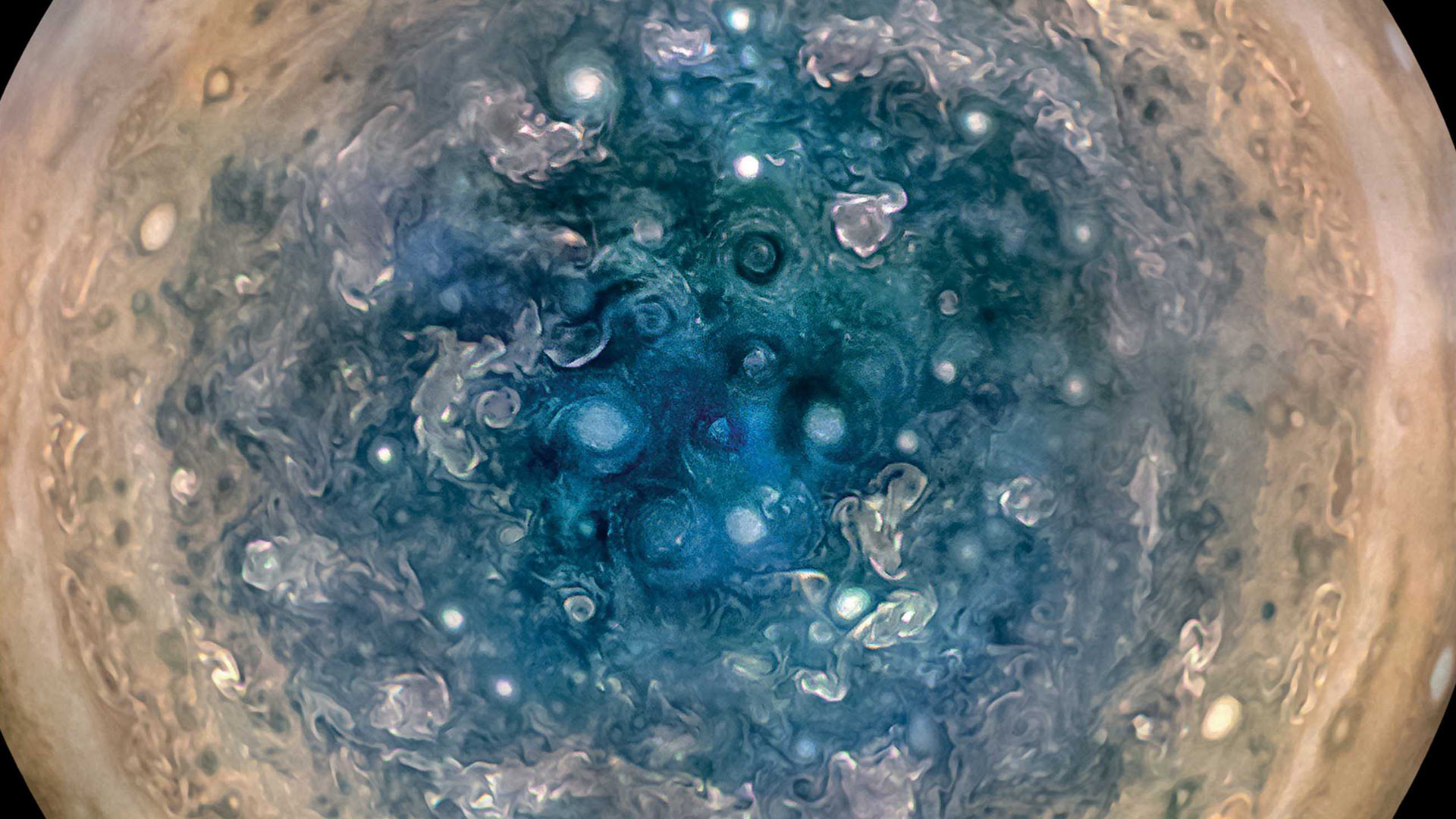 Jupiter’s south pole, as seen by NASA’s Juno spacecraft from an altitude of 32,000 miles. The oval features are cyclones.
NASA/JPL-Caltech/SwRI/MSSS/Betsy Asher Hall/Gervasio Robles

Scientists heading an imaging mission of the planet Jupiter Thursday revealed some of their first discoveries captured by scientific instruments and the camera.

The Juno Cam, aboard the spacecraft Juno and operated by Tucson's Planetary Science Institute, took images of swirling cyclones 600 miles in diameter.

NASA’s spacecraft has been collecting scientific data since late August, speeding over the poles of the largest planet every 53 days. Passing about 1,600 miles above the cloud tops, it is the closest any spacecraft has come to the Solar Systems biggest planet.

The Planetary Science Institute’s Candy Hansen manages the Juno Cam’s operations with the help of people around the world, and she said amateur astronomers are critical to helping interpret photos of Jupiter.

“We don’t have a big image processing team so we are completely relying on the help of our citizen scientists," Hanson said. "The contributions of the amateurs are essential."

Juno is providing an unexpected look at the planet, said chief scientist Scott Bolton of the Southwest Research Institute.

"Juno in many ways is looking inside of Jupiter for the first time, and close up and personal," Bolton said. "And what scientists expected was that Jupiter was relatively boring."

That is not the case, Bolton said, describing the atmosphere under the cloud surface as "dynamic." Jupiter's gravity field is "more complex" than researchers expected, and the Juno Cam's photos captured a "snow storm" of ammonia and water ice crystals, he said.

Throughout Thursday's press conference, the word "surprising" was uttered frequently by the science team members.

Jack Connerney of NASA's Goddard Space Flight Center, said there was "dramatic variation" in the planet's magnetic field, with some fields stronger than expected and others weaker.

Juno will continue orbiting Jupiter until at least July 2018.

Amateurs Help Bring Life to Images of Jupiter's Great Red Spot Jupiter to Shine Its Brightest and Biggest Jupiter Spacecraft Captures Image of Towering Polar Storms
By posting comments, you agree to our
AZPM encourages comments, but comments that contain profanity, unrelated information, threats, libel, defamatory statements, obscenities, pornography or that violate the law are not allowed. Comments that promote commercial products or services are not allowed. Comments in violation of this policy will be removed. Continued posting of comments that violate this policy will result in the commenter being banned from the site.