Will Prop 101 Take the Jolt Out of Tucson Streets?

One opponent says the city should look to its existing budget. by Brandon Mejia, AZPM Intern TWEET SHARE 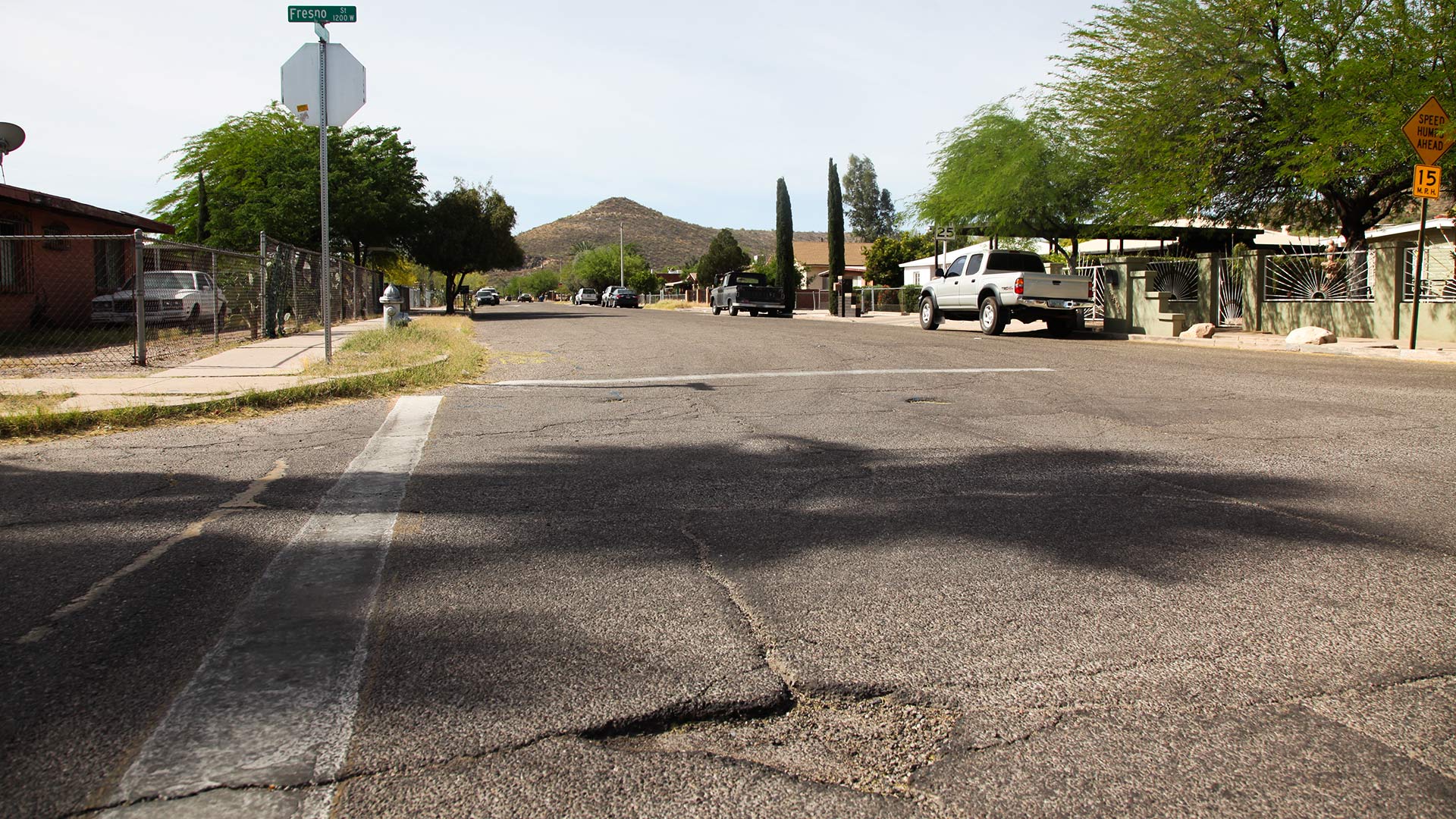 A pothole in the neighborhood of Menlo Park, with Tumamoc in the background.
Nick O'Gara, AZPM

Five years of repairs, resurfacing and restoration of Tucson streets have continued with borrowed money voters approved in 2012. Now, the city of Tucson hopes to continue progress with revenue from Proposition 101.

The new proposal would raise $250 million over the next five years. A total of $150 million would go to public safety equipment, while $100 million is slated to repair a portion of Tucson’s major streets.

It’s a need Mayor Jonathan Rothschild said the city has been rapidly catching up on.

“In fact, had we put all $100 million to it we’d be the only city in the United States, in the last 10 years, who have fully re-done all their arterial streets,” Rothschild said. “Our problem is our residential streets are way behind. We have $550 million dollars of need. This will be a piece at getting to where we need to be, but it certainly won’t solve the problem entirely.”

Opponents of the tax increase say what would solve the problem is better financial management by the city. Pima County Republican Chairman David Eppihimer said the city has plenty of money in its operating budget to make street repairs a priority.

“If they would just properly allocate the money, the income, that the city has, divide it up accordingly and not just go to the citizens when there is a shortfall,” Eppihimer said.

It’s up to Tucsonans whether or not the street repairs continue, the mayor said.

The process of fixing Tucson roads began five years ago with Proposition 409, which authorized the city to borrow $100 million with payback in a higher property tax. During that time, they covered 85 percent of major streets and 15 percent of residential streets, restoring 183 miles of Tucson streets.

City Council plans to follow the same model as they did with Prop. 409.

University of Arizona economist Price Fishback said use of a sales tax for short-term street repairs could work.

“A lot of the time, road repairs are relatively short-run, so a five-year sales tax increase might make some sense,” Fishback said. “That’s why it’s really important to try and understand what the benefits of the tax are going to be. It’s not an amorphous benefit out there.”

Fishback has driven Tucson streets for years and has seen the positive impact of the earlier project.

“Whether it’s a business or whether it’s somebody looking to retire, they want to drive on good roads. They want to ensure they have a good public safety system,” Rothschild said. “This is just part of the puzzle that keeps our momentum going in the direction to keep Tucson a wonderful place.”

Voters can cast ballots between now and May 16. All ballots must be turned in by 7 p.m. that day, and city officials say voters mailing them back should do so by May 10.

Tucson Students Could Help Reshape City Streets Tucson Setting Priorities for New Sales Tax Revenues Tucson Voters Approve Sales Tax for Public Safety, Roads
By posting comments, you agree to our
AZPM encourages comments, but comments that contain profanity, unrelated information, threats, libel, defamatory statements, obscenities, pornography or that violate the law are not allowed. Comments that promote commercial products or services are not allowed. Comments in violation of this policy will be removed. Continued posting of comments that violate this policy will result in the commenter being banned from the site.