The mission is in the 'quantification' stage, and each test costs $1-$1.5 million. by Maya Springhawk Robnett, Arizona Science Desk TWEET SHARE

The Orion project aims to take humans to Mars, but before that can happen, NASA wants to send astronauts to the moon for the first time in decades. The space agency recently came to Yuma Proving Ground to test the parachute system for that capsule. 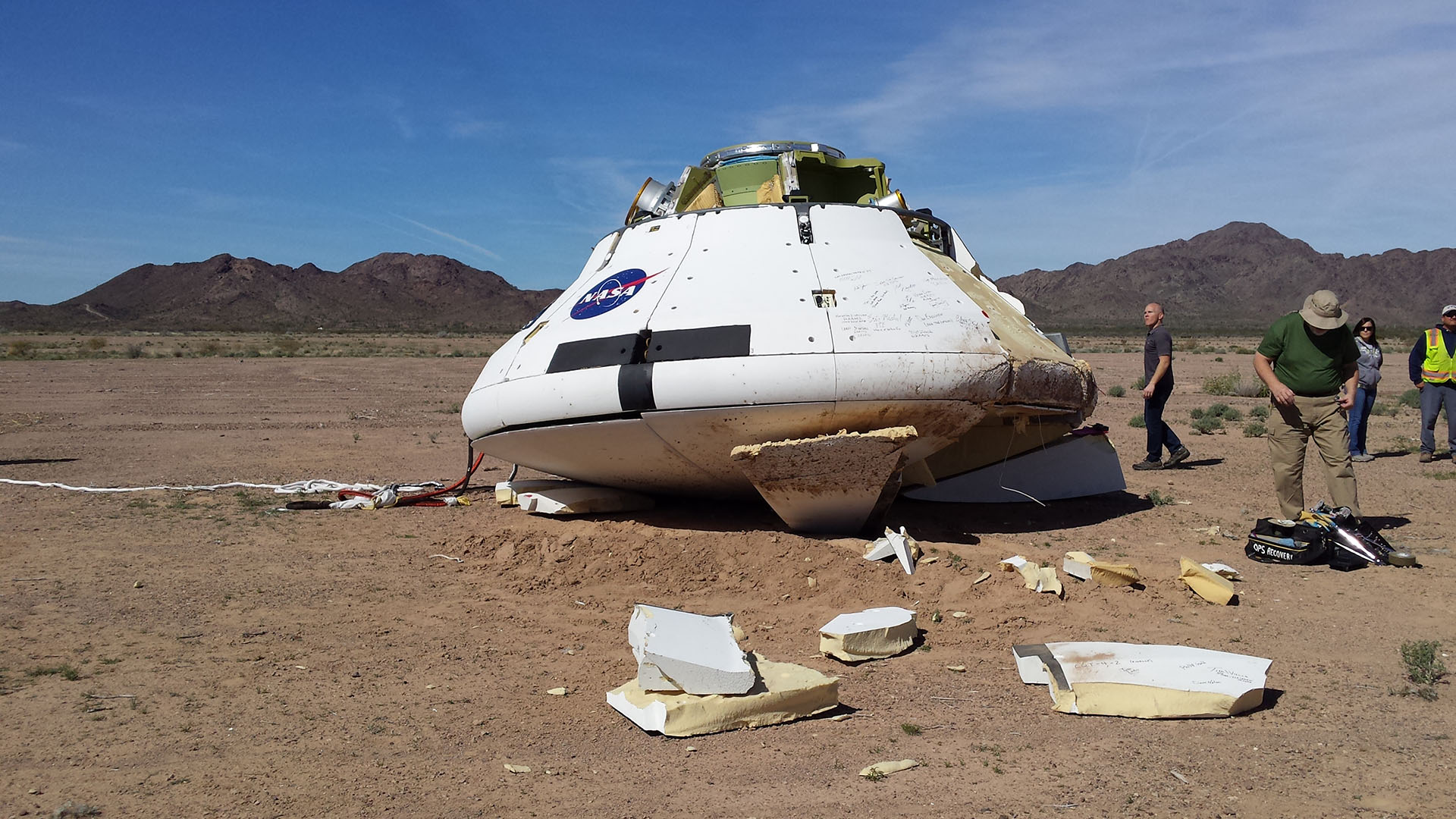 It’s chilly in the early morning as the Orion mock capsule is loaded into a C-17 aircraft at the Yuma International Airport NASA Hangar.

The capsule will be dropped from 25,000 feet. It weighs 22,300 pounds. The mock-up is like the real thing in almost every way — except size. In order to fit into the plane, the mock capsule had to be made two feet shorter. But Jared Daum, hardware lead for the Capsule Parachute Assembly System (CPAS), says that shouldn’t affect the test much.

“The effect that the vehicle has on the parachutes is what we call the wake,” Daum says. “One of the main players in that is the diameter of the spacecraft. So our diameter is representative of the actual Orion spacecraft.”

All parachute-testing for the Orion capsule takes place at Yuma Proving Ground. And Daum says these tests help them see and understand what they can’t predict.

“It’s not like you’re driving a car down the road, you get a flat tire, you can get out and change it,” Daum says. “If something goes wrong with our parachutes, we have to have the redundancy built into the system.” 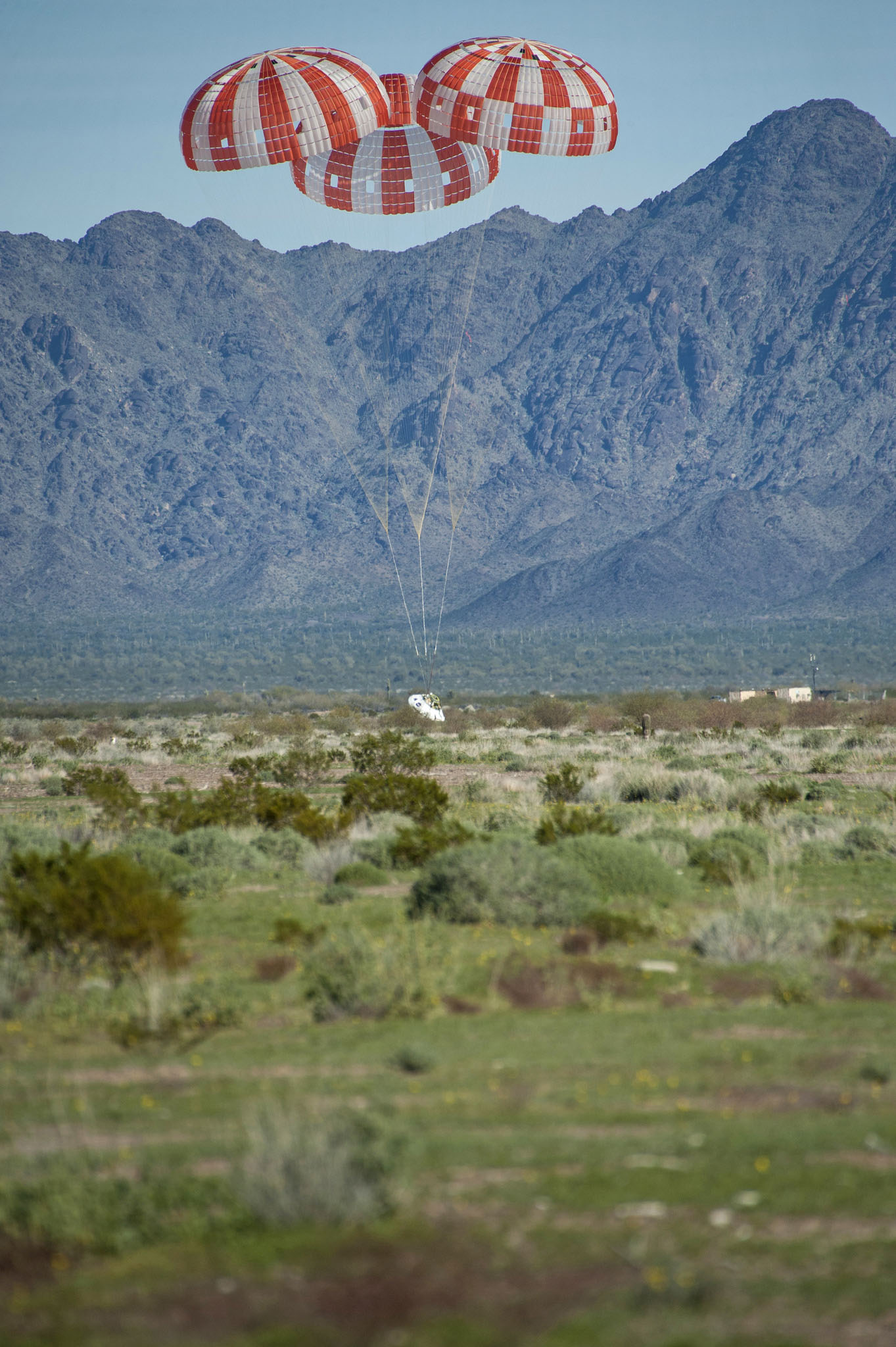 The tests needed to create that reliability are expensive.

“It costs between $1 [million] and $1.5 million per test,” says Carol Evans, the test manager.

The last time NASA came to the Yuma Proving Ground for one of these tests was in June 2016, and the test was postponed for technical reasons. Evans says that was a loss of about $200,000. Moreover, it cost them time.

“We’ve got eight tests in this qualification series and we need to proceed on schedule,” Evans says.

For that same reason, they also hope no changes need to be made. In this “qualification” stage, the goal is to test the finished product.

Harold Robertson, test engineer for CPAS, says one of the major changes made in the previous stage was switching out steel “risers” for Kevlar ones. A riser connects the parachute to the spacecraft.

“They were concerned about the risers getting in contact close with the capsule, you know, warmed up after coming into the Earth’s atmosphere,” Robertson says. “With improved materials technology, we were able to come up with textile solution that met the thermal requirements but also saved a lot of weight.”

Two days later, in the middle of the desert surrounded by mountains, a crowd of scientists and media stand under a blue sky waiting for the C-17 to fly overhead and drop the capsule. After more than an hour delay and several fly-overs, observers watch the C-17 drop the mock-up. The orange-red parachutes open and the capsule floats downward. 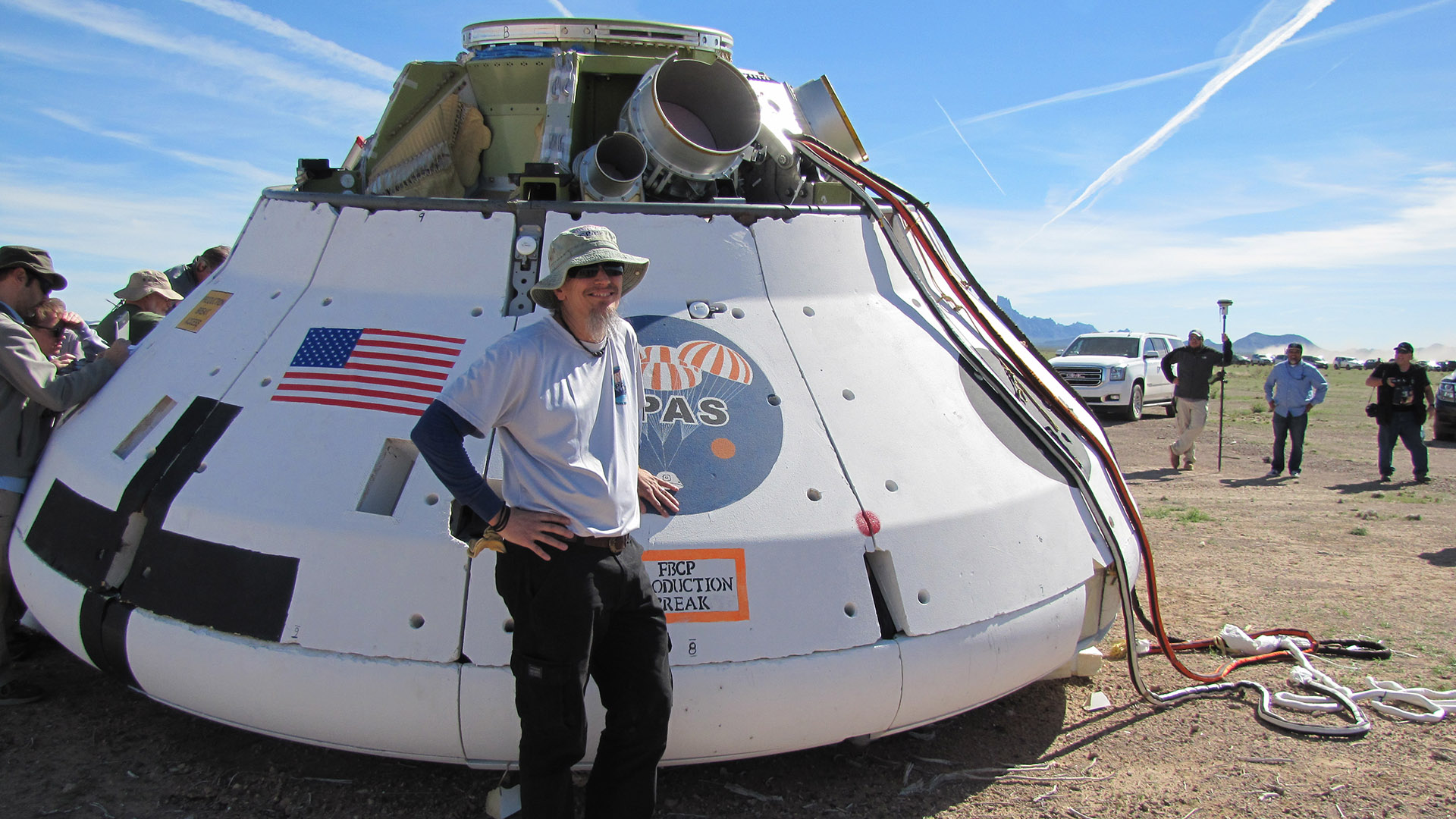 Arriving at the landing site after a short drive, Koki Machin, chief engineer for CPAS, walks up to the capsule. He’s been on this project since it began in 2006.

Machin says when they finally get their project out of Earth’s atmosphere he will be most concerned about the things he didn’t think about during the testing phase —the unpredictable things that could happen in space.

The U.S. hasn’t left low-Earth orbit since the Apollo program, which took humans to the moon and back, ended in 1972. Machin says they have a motto about that project.

“We gave out these little bracelets that said, ‘What did Apollo do?’”

Machin turns his hand over and reads the message on his wrist.

“Because we found ourselves asking that question over and over again! You know, think about this," he says. "Don’t just press on. Stop. Look at the past, learn from it, and make the best assessment from there.”

The team plans to wrap up the qualification stage with six more tests by 2019.

NASA Mission Passes Key Milestone With Yuma Parachute Test Mars 2020 Rover Mission to Include Scout Helicopter Arizona and Sonora Look to Desert to Prepare for Space Missions
By posting comments, you agree to our
AZPM encourages comments, but comments that contain profanity, unrelated information, threats, libel, defamatory statements, obscenities, pornography or that violate the law are not allowed. Comments that promote commercial products or services are not allowed. Comments in violation of this policy will be removed. Continued posting of comments that violate this policy will result in the commenter being banned from the site.