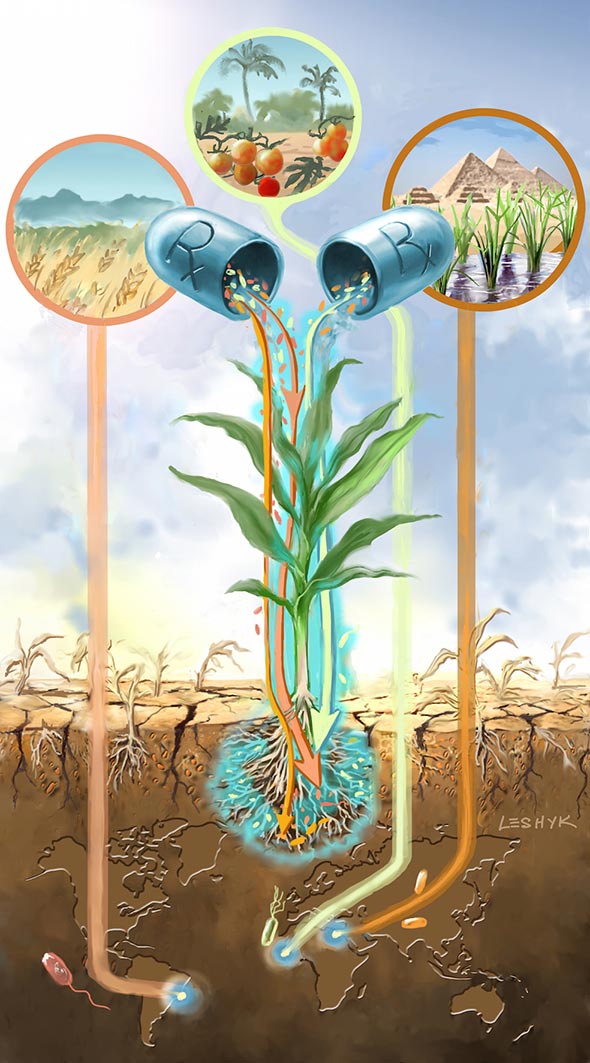 VIEW LARGER A future is depicted in which rhizobacteria sourced from stressful areas around the world may be used as a metaphorical “prescription for drought.” Illustration by Victor Leshyk, 2016.
Victor Leshyk

A particular kind of soil bacteria could help farmers produce food during droughts, according to Arizona ecologists.

Grain crops like corn and wheat produced up to 40 percent more seeds when rhizobacteria were present. Things like asparagus and lettuce also increased in size.

“I think these findings are encouraging, especially when we’re considering areas with severe soil degradation. And right now up to 40 percent of the world’s agricultural land is seriously degraded,” said Rachel Rubin, the lead author of the analysis.

Farmers in drought-prone areas could inject the soil or coat seeds with the bacteria before planting.

Rubin said one limitation is most studies took place in greenhouses; more field research is needed. The review appeared in the March issue of Plant and Soil.

Microbes Aren't as Bad as You Might Think, Researchers Say Climate Change is Making Droughts Worse In the Western US, Study Says A Gourmet Feast Grown with a Green(house) Thumb
By posting comments, you agree to our
AZPM encourages comments, but comments that contain profanity, unrelated information, threats, libel, defamatory statements, obscenities, pornography or that violate the law are not allowed. Comments that promote commercial products or services are not allowed. Comments in violation of this policy will be removed. Continued posting of comments that violate this policy will result in the commenter being banned from the site.