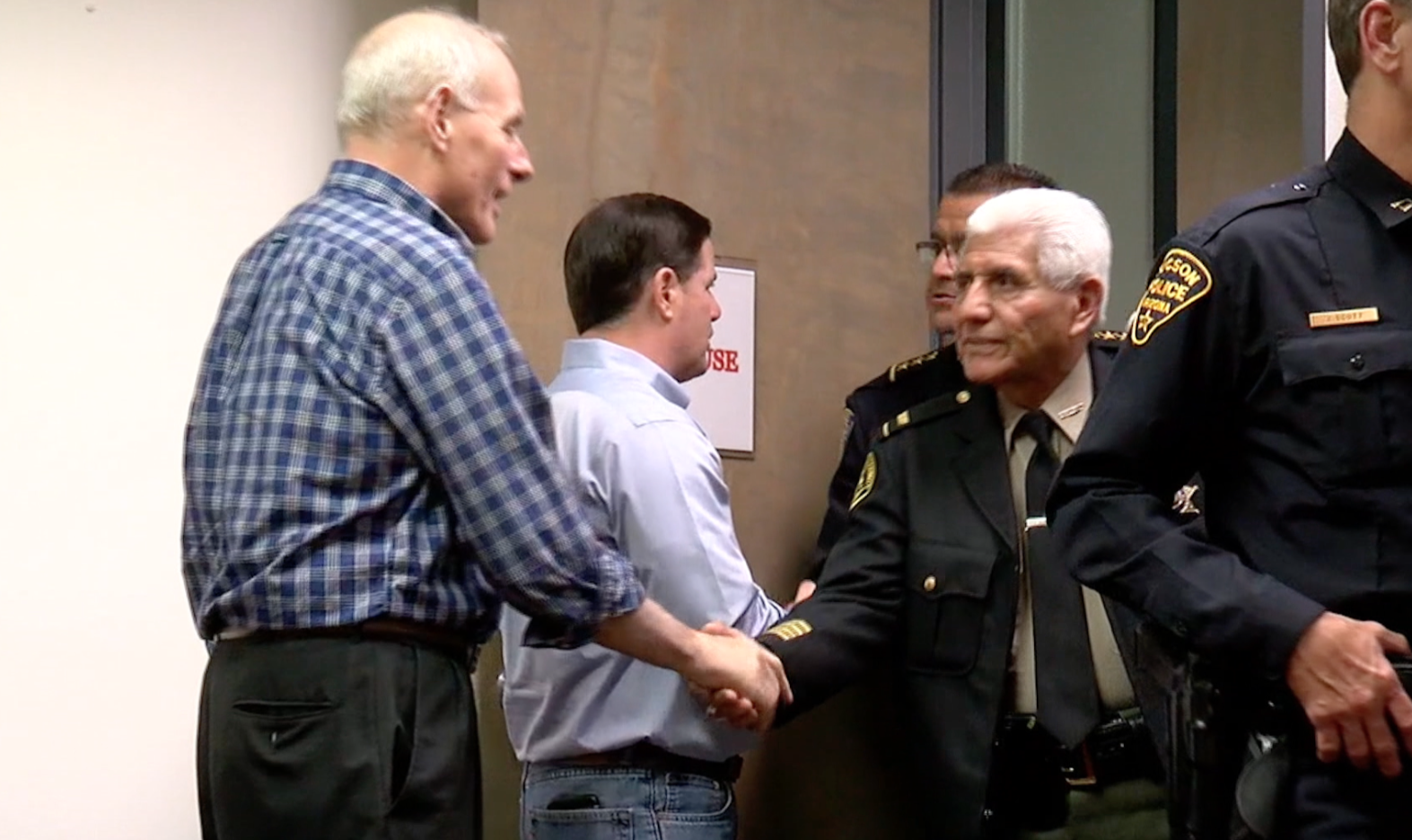 Arizona's four border sheriffs all walked out of a meeting Thursday with Homeland Security John Kelly with positive things to say.

Kelly met with the sheriffs and other local and state officials at the Nogales Border Patrol station in his first visit to the Arizona border since joining the Trump administration last month.

His office had described the visit as an opportunity to "discuss the administration's efforts to improve security along the border."

Sheriffs from the four border counties said their meeting had a positive tone, in what they said became mostly a listening session.

Santa Cruz County Sheriff Tony Estrada said he and the other sheriffs were “impressed,” saying the secretary had “a mindset that he wants to listen.” And while there were “still a lot of things that are not set in stone with regard to what they plan to do,” Estrada said he felt Kelly will be an asset to the border community.

Pima County Sheriff Mark Napier said it was “refreshing” to have Washington D.C. come to the border, but also pointed out that specific plans were not established.

“It wasn’t drilling down to the very finite level. This was more of a 30,000-foot view of what’s going on.”

The idea of a physical wall along the border was discussed briefly in the meeting, which was central to the campaign of President Donald Trump. Secretary Kelly said in confirmation hearings that a “layered defense”is necessary on the border. Cochise County Sheriff Mark Dannels said the conversation touched on the idea that physical barrier comes in different forms.

Yuma County Sheriff Leon Wilmot said the discussion touched on the expansion of Operation Streamline, the government’s initiative to expedite the criminal prosecution of people who cross the border illegally.

“We were pushing for the fact that they need to reinstitute Operation Streamline. They needed to provide the resources needed to the U.S. attorneys office, not only for the prosecutors, but also for district judges, to handle those cases.”

The secretary met earlier in the day with Gov. Doug Ducey and toured border security facilities in Nogales.

Kelly is designated to lead implementation of Trump's executive orders to expand the border wall and beef up forces on the border.

He told a congressional committee this week that he wants work on the expanded wall to begin as soon as possible, and he said the bulk of the work could be underway in two years.

About 200 miles of Arizona's 370-mile border with Mexico has fencing beyond simple barbed wire.

County Offers Free Active Shooter Training 'Difficult Conversations' at Meeting Between Homeland Security, Rights Groups Looking to Hire, Border Patrol May Soften Lie Detector Requirement
By posting comments, you agree to our
AZPM encourages comments, but comments that contain profanity, unrelated information, threats, libel, defamatory statements, obscenities, pornography or that violate the law are not allowed. Comments that promote commercial products or services are not allowed. Comments in violation of this policy will be removed. Continued posting of comments that violate this policy will result in the commenter being banned from the site.