Groups serving developmentally disabled adults fear they may have to close their doors. by Nancy Montoya Tweet 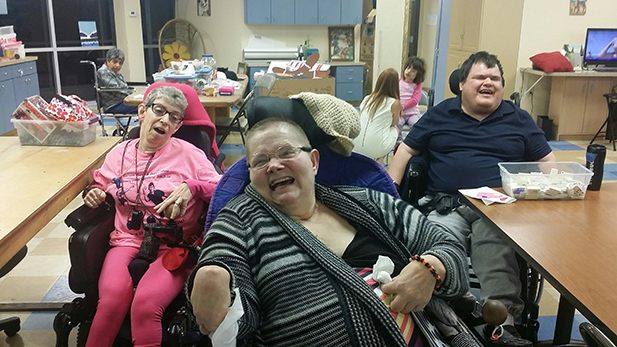 Nonprofits that provide services to residents with developmental disabilities may end up as unintended casualties of the passage of Proposition 206, which raised Arizona’s minimum wage to $10 an hour.

Some of those organizations must now come up with more money to continue to serve their clients. In Arizona, more than 40,000 people live with some form of developmental disability. Some are being cared for by their families, while others are in small group homes where the care is specialized, according to state agencies.

Many of the adults at the Easter Seals Blake Foundation day care program in Tucson have intense physical and emotional needs, and 15 of them are wheelchair-bound. Some depend on the human connection found at the facility.

Mary, who receives care at Easter Seals Blake, is 50 years old, has cerebral palsy and has lived most of her life in a wheelchair. Forty years ago, the solution was to warehouse people like Mary in large institutions.

“Arizona Used to be one of the best states for human services – it really was,” said Ema Kammeyer, who has led the Easter Seals Blake Foundation in Tucson for 30 years.

Gina Judy, the foundation’s Chief Operating officer, said Arizona used to be know as having the most advanced deinstitutionalization efforts.

But then came the 2008 recession, and state funding for such nonprofits was cut, across the board, by an average of 25 percent. The industry has yet to recuperated from the loss. Now, the statewide mandatory minimum wage increase is presenting the challenge of finding even more money.

“The dollar figure for us on an annual basis is about half a million dollars,” Kammeyer said.

Finding half a million dollars more per year to pay for the salary increases, on top of having to live with those state budget cuts from 2008, means something has to give, she added.

For nonprofit United Cerebral Palsy of Southern Arizona(USPCA), it means cutting the vital “Respite Daily” program, which gives families a break in caregiving for a loved one with severe disabilities. Respite Daily is overnight care or – in the case of an emergency – trained care for a few days at a time.

“Most agencies had already eliminated Respite Daily. We were one of the last holdouts available for families to do respite daily, said Rhonda Murray, human resources director for UCPSA. “So no longer will families be able to contract with us for longer than 11 hours of respite per day.”

Murray said the organizations aren’t opposed to the increase. They’re just struggling to make it work.

“We know that our employees deserve – they definitely deserved – a minimum-wage increase. However, it seems that the voters were not completely informed of how that would happen, especially for entitlement programs like ours.”

An emergency budget extension of $36 million was signed by Gov. Doug Ducey last week to help nonprofit agencies funded by the state make it to the end of the fiscal year in June. But after that, agencies may have to cut programs, cut employees or close their doors.

Arizona's Minimum Wage Going Up Jan 1 Flagstaff Council Walks Back City Minimum Wage Hike Requirement Arizona Supreme Court Rejects Challenge to Minimum Wage Increase
By posting comments, you agree to our
AZPM encourages comments, but comments that contain profanity, unrelated information, threats, libel, defamatory statements, obscenities, pornography or that violate the law are not allowed. Comments that promote commercial products or services are not allowed. Comments in violation of this policy will be removed. Continued posting of comments that violate this policy will result in the commenter being banned from the site.