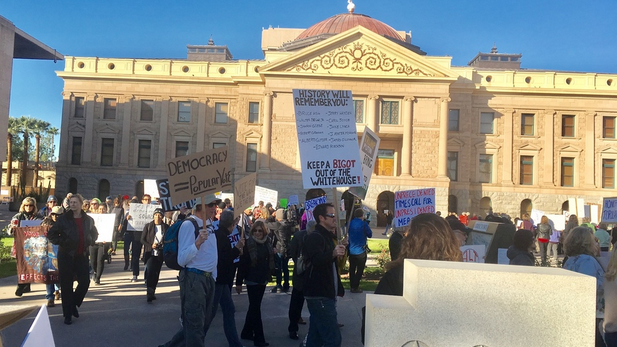 The vote went as expected, after Trump won the popular vote in the state by a little less than 4 percentage points over Democrat Hillary Clinton last month.

"We wrapped up the election and put a big red bow on it," said elector Sharon Giese, state Republican national committeewoman. "And now, it is over and people have to learn to accept it just as we did four years ago and eight years ago, so that we move on."

Dozens of protesters marched outside, asking in vain that the electors choose Clinton.

The eight men and three women electors are all Republicans, as chosen by voters who selected Trump on their ballots.

The electors cast six groups of ballots called Certificates of Vote. One is sent to the U.S. Senate for the official count in January, two go to the Arizona Secretary of State, two for the National Archives and one to the presiding judge in Maricopa County.

No Voter Fraud in Arizona, Officials Say Can't Get to Women's March in DC? Go to Downtown Tucson Change to How Electoral College Votes? Not Likely in Arizona
By posting comments, you agree to our
AZPM encourages comments, but comments that contain profanity, unrelated information, threats, libel, defamatory statements, obscenities, pornography or that violate the law are not allowed. Comments that promote commercial products or services are not allowed. Comments in violation of this policy will be removed. Continued posting of comments that violate this policy will result in the commenter being banned from the site.