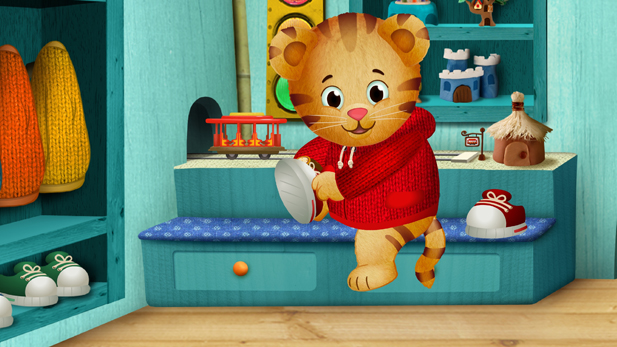 Four-year-old Daniel Tiger invites young viewers into his world, giving them a kid’s eye view of his life.
PBS

TUCSON, AZ – DECEMBER 12, 2016 – Arizona Public Media announced that it will launch new, free localized 24/7 children’s services on January 16, 2017. Provided by AZPM, the free services include a TV channel and live stream on digital platforms. The effort is AZPM’s latest initiative to support early learning in the community. In addition to the dedicated block of children’s programming every weekday morning, PBS 6 will broadcast PBS KIDS shows 24 hours a day on an additional television channels 6.2 & 27.2 and offer a live stream, making it easy for children throughout southern Arizona to watch their favorite series during primetime and other after-school hours when viewing among families is high.

Viewers will be able to watch the AZPM-branded live stream through pbskids.org and on the PBS KIDS Video App, which is available on a variety of mobile devices, and tablets. Soon after launch, the live stream will be available on over-the-top platforms such as Roku, Apple TV, Amazon Fire TV, Android TV, Xbox One and Chromecast. The live stream complements on-demand clips and full episodes, which will continue to be available for free on the PBS KIDS Video App and streaming via pbskids.org.

Following its initial launch, the localized live stream experience will expand to offer an integrated games feature, enabling children to toggle between a PBS KIDS show and an activity that extends learning – all in one seamless digital experience. The live stream and games feature is grounded in research demonstrating that measurable gains in learning are achieved when children engage with PBS KIDS content on multiple platforms. The games will align with the learning goals of each TV series, deepening children’s involvement and supporting learning.

PBS stations reach more kids aged 2-5, more moms with children under 6 years old and more children from low-income families than any other kids TV network.(i) With its new 24/7 channel and digital offerings, AZPM will build on this reach and impact.

Through this effort, AZPM will extend its commitment to early learning by offering more families high-quality PBS KIDS content that is trusted by parents and proven to help kids learn. In a recent survey, PBS KIDS led all networks in improving kids’ behavior, with 74% of parents saying their child exhibits more positive behavior after engaging with PBS KIDS.(ii) And years of research confirm that PBS KIDS media content helps children build critical skills that enable them to find success in school and life, while also helping parents increase their own engagement. A recent study conducted by WestEd found that PBS KIDS resources can help narrow the math achievement gap for children from low-income families and better prepare them for kindergarten. Additionally, parents’ awareness of their children’s math learning increased significantly – as did their use of strategies to support their children’s learning.(iii)

Designed to meet the needs of today’s kids, AZPM’s new, free 24/7 services will provide learning opportunities for children whenever and wherever they access media. Nielsen data demonstrate that live TV is the dominant way children access video, accounting for 67% of the time children spend watching video content.(iv) Most kids’ TV viewing takes place on weeknights and weekend afternoons and evenings.(v) This trend is true for all children, but especially for those in low-income families.(vi)

The AZPM PBS KIDS 24/7 channel will include popular favorites such as DANIEL TIGER’S NEIGHBORHOOD, ODD SQUAD, WILD KRATTS and DINOSAUR TRAIN; PBS KIDS’ newest series SPLASH AND BUBBLES, NATURE CAT and READY JET GO! will also be featured. AZPM will provide the PBS KIDS 24/7 channel on 6.2 & 27.2, in addition to its current primary channel PBS 6, which will continue to feature a PBS KIDS day part. The schedule of children’s programming on the primary channel will be different from the 24/7 channel, offering families a variety of options. The full local schedule is available at azpm.org.

The 24/7 PBS KIDS offering is an integral part of AZPM’s long-term vision for its children’s service and will build on its reach and impact in the community, where it provides essential services for kids, parents and teachers.

About AZPM
AZPM is an Emmy® award-winning, member-supported media organization serving all of Southern Arizona. AZPM has six public television channels and three radio stations, including PBS 6, PBS Kids and NPR 89.1. AZPM produces local content from its digital studios on the campus of the University of Arizona and is provided as a community service and educational resource. More information about AZPM, including program schedules and Video-on-Demand offerings, can be found online at azpm.org.

Arizona Public Media® and AZPM® are registered trademarks of the Arizona Board of Regents.

Arizona Public Media Receives 15 Individual Rocky Mountain Emmy® Awards in 6 Categories Printable Thanksgiving Thank You Notes AZPM celebrates the culture and contributions of Indigenous Peoples during Native American and Alaska Native Heritage Month
By posting comments, you agree to our
AZPM encourages comments, but comments that contain profanity, unrelated information, threats, libel, defamatory statements, obscenities, pornography or that violate the law are not allowed. Comments that promote commercial products or services are not allowed. Comments in violation of this policy will be removed. Continued posting of comments that violate this policy will result in the commenter being banned from the site.