Preliminary indications are that the animal has not been spotted before. by Zachary Ziegler Tweet 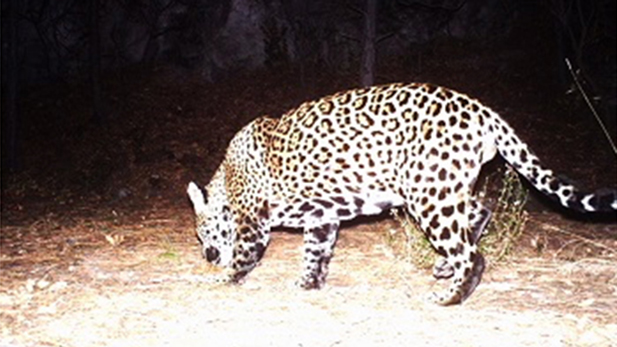 A photo of a Jaguar in the Huachuca Mountains taken on Dec. 1, 2016
Arizona Game and Fish Department

Arizona Game and Fish and the U.S. Fish and Wildlife Service on Wednesday released a photo of a jaguar taken by a military-owned camera in the Huachuca Mountains.

The camera is part of a monitoring program run by the Fort Huachuca Army installation. The image was captured on Dec. 1.

According to Game and Fish officials, early indications are that this is a jaguar that has not been photographed in the U.S. before now.

“It’s exciting, but it’s not surprising," said Game and Fish's Mark Hart. "We know that every five-to-10 years, a solitary male jaguar comes into southeastern Arizona and roams sometimes a huge expanse of territory, 500 square miles in one case. Why they come up is a bit of a mystery.”

Hart said there is plenty of food for the apex predator in the Huachucas, but there is no proof of a female jaguar north of Mexico.

It has been some time since a jaguar has been seen in the Huachucas, according to Hart. But another species of cat has been sighted multiple times recently: ocelots.

A Fascination for Fishing Cats Jaguar Seen in Arizona Last Year has Been Killed in Mexico Environmental Group Sues Federal Agencies Over Rosemont Copper Approval
By posting comments, you agree to our
AZPM encourages comments, but comments that contain profanity, unrelated information, threats, libel, defamatory statements, obscenities, pornography or that violate the law are not allowed. Comments that promote commercial products or services are not allowed. Comments in violation of this policy will be removed. Continued posting of comments that violate this policy will result in the commenter being banned from the site.