The resolution targets the export of sacred artifacts, calls for collaboration to stop the trade. Tweet 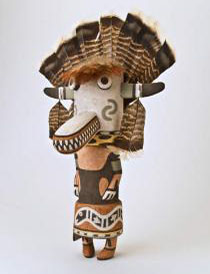 The House and Senate have passed a resolution to help stop the trafficking of sacred Native American artifacts.

For several years art dealers have purchased sacred artifacts for export overseas, where often French auction houses have sold them off to the highest bidder.

For the Hopi, these ceremonial artifacts are their ancestors - living beings who belong home on Hopi land. They are protected in the United States and cannot be sold here, but several sales have occurred in France in the last decade.

The resolution condemns the theft or sale of the cultural items and calls on several federal agencies to work with the tribes to stop the trafficking and help repatriate the artifacts. It also calls on the comptroller general of the U.S. to study the scope of the problem and what needs to be done to stop it.

Navajo Farmers Open Legal Battle Over Mine Waste Spill Buy-Back Program Helps Tribes Consolidate 1.7 Million Acres Feeding Our Future: Putting Native Foods Back on the Plate
By posting comments, you agree to our
AZPM encourages comments, but comments that contain profanity, unrelated information, threats, libel, defamatory statements, obscenities, pornography or that violate the law are not allowed. Comments that promote commercial products or services are not allowed. Comments in violation of this policy will be removed. Continued posting of comments that violate this policy will result in the commenter being banned from the site.