So Far, Monsoon 2016 Has Been Normal and Above Most Places

Though when it rains it doesn't pour everywhere, with some areas receiving less. by Vanessa Barchfield TWEET SHARE 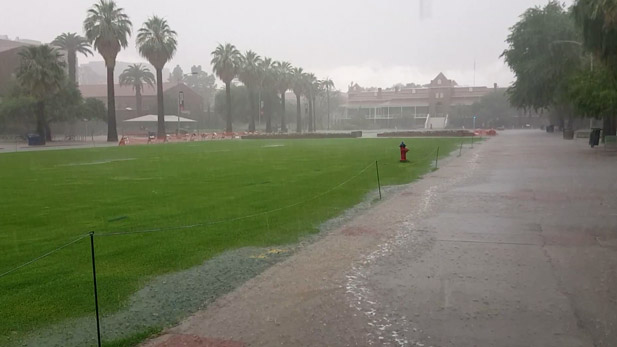 An intense rainstorm floods the mall on campus of the University of Arizona.
AZPM Staff

Arizona's monsoon season is nearing an end, and rains this year have been pretty good so far, said the National Weather Service's Ken Drozd.

"Most folks are normal and many are actually above normal for rainfall totals," he said.

But, as always, it depends on where in Southern Arizona you’re standing.

"One area that’s maybe an exception is far out to the west of Tucson and in western Pima County - not getting as much rain as Tucson and further east."

Drozd said the monsoon has come in stops and starts, with strong rains in the end of June, a slow July and August and a relatively wet September thanks to Hurricane Newton.

"That’s just the character of how things went this year as far as monsoon 2016."

Drozd says there’s no real rain forecast in the next few days, but there could still be more to come: Monsoon season ends Sept. 30.

Monsoon Rains Ease Arizona Drought Conditions Newton Slows, Will Not Bring Much More Rain to Southeast Arizona Monsoon Knock Your Power Out? There's an App for That
By posting comments, you agree to our
AZPM encourages comments, but comments that contain profanity, unrelated information, threats, libel, defamatory statements, obscenities, pornography or that violate the law are not allowed. Comments that promote commercial products or services are not allowed. Comments in violation of this policy will be removed. Continued posting of comments that violate this policy will result in the commenter being banned from the site.