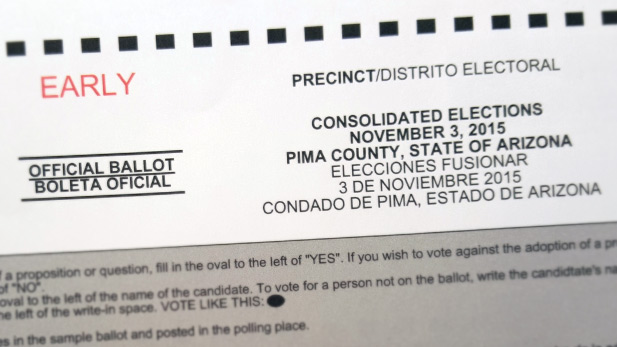 Republicans have overtaken independents as Arizona's largest voting bloc for the first time since January 2014, according to data from the Arizona secretary of state.

Of the state's 3.4 million voters, 1.19 million are registered Republicans and 1.16 million have not designated a party preference.

According to a statement from Secretary of State Michele Reagan, many independents chose to register with parties for the closed presidential preference election and didn’t change their affiliation following the vote.

Almost 38 percent of voters in Pima County are registered as Democrats.

Level of Party Dissatisfaction 'Unprecedented,' Expert Says Episode 282: In Unusual Election Season, Outcomes Remain Uncertain 2016 Sets Record for Number of Elections in Arizona
By posting comments, you agree to our
AZPM encourages comments, but comments that contain profanity, unrelated information, threats, libel, defamatory statements, obscenities, pornography or that violate the law are not allowed. Comments that promote commercial products or services are not allowed. Comments in violation of this policy will be removed. Continued posting of comments that violate this policy will result in the commenter being banned from the site.