Barriers at washes mean don't cross; those who do could be fined. by Christopher Conover TWEET SHARE 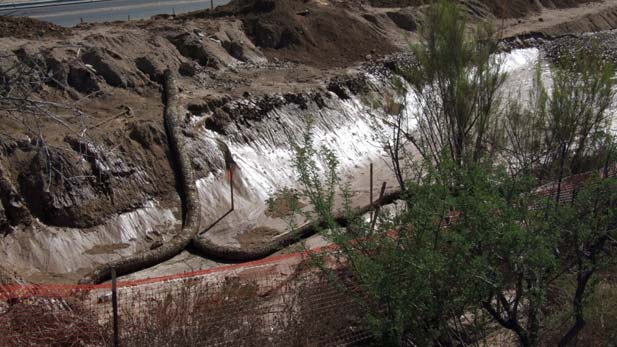 Monsoon season officially begins Wednesday, although Friday and weekend rainfall was the real beginning of the summer rainy season.

With it come official reminders and warnings that a monsoon storm can turn a dry road in Tucson into a flowing river in a matter of minutes.

Officials with the city of Tucson want drivers to remember not to go around road closed signs.

“After a storm comes through and water comes through a wash, what may look like an inch of standing water in that roadway in fact could be a three to four foot sinkhole," said Michael Graham, a city transportation spokesman.

Graham said even if a road closed sign is at a dry wash, motorists should find an alternative route. City officials are in touch with the National Weather Service and flood waters could be traveling towards the road.

If a driver gets stuck after going around a road closed sign and must be rescued, the "stupid motorist law" allows officials to charge the motorist force payment for the cost of the rescue.

Southern Arizona's Monsoon Starts Strong This Year Flash Flood Warning in Effect in Tucson Metro Area Tuesday Four Rescued from Rain-Swollen Wash in Tucson; No One Injured
By posting comments, you agree to our
AZPM encourages comments, but comments that contain profanity, unrelated information, threats, libel, defamatory statements, obscenities, pornography or that violate the law are not allowed. Comments that promote commercial products or services are not allowed. Comments in violation of this policy will be removed. Continued posting of comments that violate this policy will result in the commenter being banned from the site.