By Bryn Bailer, for AZPM

Hot and dry weather has contributed to spread of a grassland fire southeast of Arivaca near the Mexican border, and the fire has burned 8,500 acres, Coronado National Forest officials reported Monday. 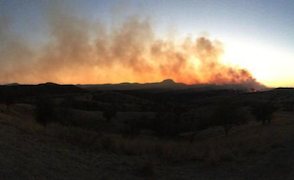 “This year has been an active year, and we’re anticipating more activity," said Heidi Schewel, spokeswoman for the Coronado forest. "Things are starting to get warmer and drier at higher elevations as well, and those all favor wildfire conditions.”

Hotshot crews were among the firefighters brought in to battle the blaze, which has been burning one week.

No structures were threatened, and the fire cause was under investigation.

Forester: 'Active Wildfire Season Has Materialized' Wildfires Have Burned 30,000 Acres in Coronado This Year Personal Drones Can Endanger Wildfire Fighting Efforts
By posting comments, you agree to our
AZPM encourages comments, but comments that contain profanity, unrelated information, threats, libel, defamatory statements, obscenities, pornography or that violate the law are not allowed. Comments that promote commercial products or services are not allowed. Comments in violation of this policy will be removed. Continued posting of comments that violate this policy will result in the commenter being banned from the site.