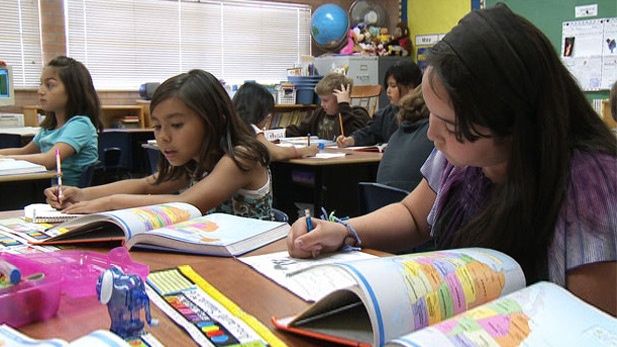 The vote margin on Proposition 123 was at 1.6 percent with more than 1.03 million ballots counted statewide. "Yes" votes outnumbered "no" votes 520,425 to 503,659. That was the largest margin since ballot counting began Tuesday night after polls closed in the special election.

“The votes have been counted, and the result is clear," Ducey said in a statement. "This is a huge victory for public education in Arizona. After years of lawsuits and fighting, we are moving forward and funding our teachers, students and schools."

State Rep. Randall Friese, D-Tucson, said the narrow margin of victory indicated widespread voter dissatisfaction with the plan, even among some who voted for it.

“I think this razor-thin election gives us an indication of how displeased the voters are with this plan," Friese said. "Forty-nine and a half percent of people said no, upfront. And there is a distinct proportion of those who said yes who don’t like this plan but are voting for it any way because our schools need money.”

Proposition 123 amends the state Constitution to allow a bigger payout to schools from the state Land Trust Fund. The current payout is 2.5 percent a year, and the new payout will be 6.9 percent for the next 10 years.

That will total $3.5 billion over the decade, including an immediate payout to schools this year of about $259 million, Ducey has said. Many schools have said they will use the money to increase teacher pay, for which Arizona ranks among the lowest in the nation.

Tucson teacher Mary Martinez of the Sunnyside School District said she and her peers have already gotten a promise of higher pay.

“The big portion of the money at least in the first two years is going to employee salaries," said Martinez, a representative of the teachers' bargaining team. "So we’ve negotiated with district leadership.”

Ducey proposed using the state land trust payout plan last year to settle a lawsuit over school funding and as a way to spend more on schools without raising taxes.

Schools filed the suit in 2010 accusing legislators of breaking the law by not increasing school funding at the rate of inflation.

State courts at every level through the Supreme Court agreed with the schools, saying they were owed $330 million right away and a total of up to $1 billion in back payments for several years.

The state Supreme Court stopped short of ordering the money paid, although it upheld the ruling that the Republican-controlled Legislature violated the state Constitution. Lawyers for the Legislature and the schools began negotiating a settlement but could not reach agreement.

State Treasurer Jeff DeWit was the lead opponent of the proposition, saying it would deplete the Land Trust Fund. The fund was set up at the time of statehood in 1912 as a permanent fund from which the proceeds and not the principal would be used to support education.

DeWit predicted court action over several aspects of Proposition 123. He called it unconstitutional.

"There will be a litany of lawsuits," DeWit said. "I think we’ve already seen some of that come about now, because it was drafted very poorly. And there are so many legal holes in it.”

Ducey: More Money for Schools, 'Above, Beyond Inflation' Arizona Education Chief: Schools Need $680M Education Superintendent: Minimum Wage Will Hit Schools
By posting comments, you agree to our
AZPM encourages comments, but comments that contain profanity, unrelated information, threats, libel, defamatory statements, obscenities, pornography or that violate the law are not allowed. Comments that promote commercial products or services are not allowed. Comments in violation of this policy will be removed. Continued posting of comments that violate this policy will result in the commenter being banned from the site.