× CORONAVIRUS: The latest coverage and local resources regarding COVID-19 from the Arizona Public Media newsroom.
/ Modified may 12, 2016 6:08 p.m. 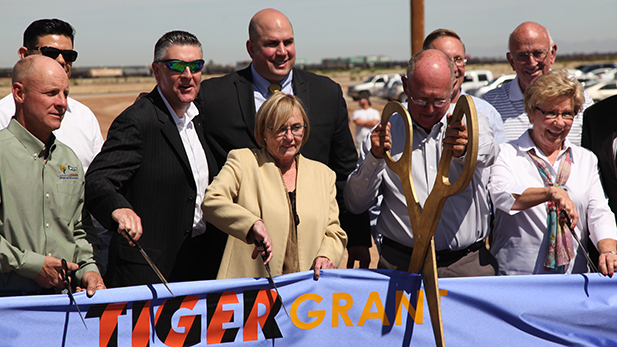 The Port of Tucson's $12 million expansion is complete, and ready to receive traffic from the Union Pacific's main line.

The project was a public/private partnership between the port, Union Pacific and Pima County.

The new expansion adds 9,000 feet of track to the port. The new space will allow full-length trains to exit for loading and unloading at the Port of Tucson.

“So when you’re going down the freeway at 75 miles an hour, you have to start decelerating and have an off ramp to get stopped," said Port of Tucson President Alan Levin. "Basically, we have a 9,000-foot off ramp.”

Prior to the 'off-ramp,' any cargo would have to come in via short trains.

This gives trains the ability to travel direct to Tucson from the country's two busiest ports, Los Angeles and Long Beach, along with being the terminus for the line that crosses into the U.S. at Nogales.

Can Nogales Recapture Mexican Produce Imports Lost to Texas? Tucson-to-Phoenix Passenger Rail: Where's the Money? DUSTWUN - A film about life, death & trust on the U.S. / Mexico border.
By posting comments, you agree to our
AZPM encourages comments, but comments that contain profanity, unrelated information, threats, libel, defamatory statements, obscenities, pornography or that violate the law are not allowed. Comments that promote commercial products or services are not allowed. Comments in violation of this policy will be removed. Continued posting of comments that violate this policy will result in the commenter being banned from the site.