The University of Arizona's Lunar and Planetary Laboratory has played a part in each of NASA's planetary exploration missions. A new book called Under Desert Skies: How Tucson Mapped the Way to the Moon and Planets chronicles that history, and the scientists who made it possible. Next, Sara Hammond interviews author and researcher Melissa Sevigny. 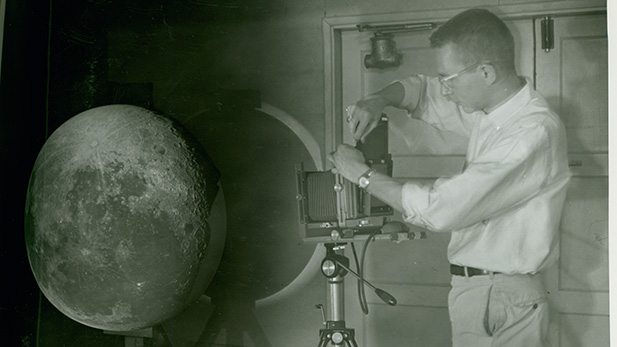 William Hartmann photographs an image of the Moon projected on a three-foot hemisphere in the UA Lunar and Planetary Lab's first premises, a Quonset hut.
William Hartmann and Ewen Whitaker

A former director of the University of Arizona’s Lunar and Planetary Laboratory commissioned a student to collect memories from the lab’s early and longtime researchers.

Ten years after the project started, Under Desert Skies: How Tucson Mapped the Way to the Moon and Planets has been published by the University of Arizona Press.

Author Melissa Lamberton Sevigny was a NASA Space Grant intern at LPL, as the lab is called, when the late Michael Drake asked her to undertake the project.

“At the end of that first year I had a dozen interviews or so and I had so much fun on the project I went to Mike and I said, ‘I don’t think I’m done yet. Why don’t you keep me on for another year?’" Sevigny said.

Four years later, she had recorded almost 60 interviews with the lab’s planetary scientists and former students.

Among those profiled in the book are Ewen Whitaker, Peter Smith and William Hartmann.

Whitaker came to the United States on a temporary assignment in the early 1960s to help lab founder Gerard Kuiper map the Moon in anticipation of the Apollo program. He never returned to the United Kingdom.

Smith has worked on a number of planetary missions and is best known for leading the Phoenix Mission to Mars in 2008.

Hartmann was one of the department’s first graduate students and co-founded the Tucson-based Planetary Science Institute. He is an accomplished space artist.

Scientists Want to Know: Can Table Salt Slow Global Warming? UA Camera to Snap Final Pics for Saturn Mission Before Crashing into the Planet Scientists See Clues of Possible Unseen Planet in Solar System
By posting comments, you agree to our
AZPM encourages comments, but comments that contain profanity, unrelated information, threats, libel, defamatory statements, obscenities, pornography or that violate the law are not allowed. Comments that promote commercial products or services are not allowed. Comments in violation of this policy will be removed. Continued posting of comments that violate this policy will result in the commenter being banned from the site.