Prescribed Burns Under Way to Prepare for Active Fire Season 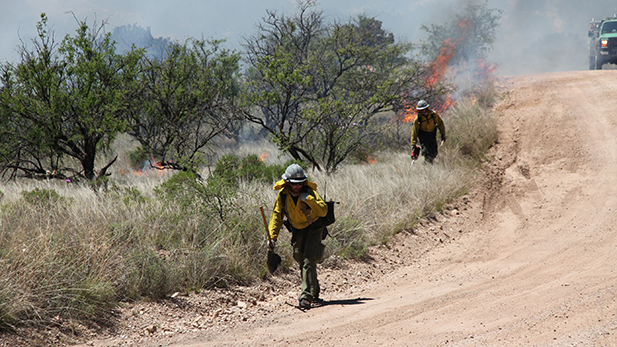 Up to 30,000 acres will be deliberately burned in the Galiuro Mountains this spring to prepare for what could be a serious fire season, federal land management officials said Tuesday.

Coronado National Forest crews are managing fire across 19,000 acres on the southern edge of the Galiuros in an area known as Muleshoe Ranch. That is about 40 miles northeast of Tucson.

The Bureau of Land Management plans the same for 10,962 acres in the area, which sits east of the Santa Catalina Mountains and on the other side of the San Pedro River Valley.

Land managers said they are preparing for what could be an active fire season.

“With El Niño, we were expecting a little more moisture," BLM's Adam Milnor said. "We had a February that was really below average for rainfall, and we had a monsoon last year that has led to a lot of healthy growth.”

Recent warm weather could cause the growth from last summer's monsoon to dry out, leaving plenty of fuel for any fires that catch during the summer.

Fire Managers Setting Prescribed Burns This Week Minimal El Niño Rains Create Prime Conditions for Wildfire Study: Wildfire May Double Erosion in Western Watersheds
By posting comments, you agree to our
AZPM encourages comments, but comments that contain profanity, unrelated information, threats, libel, defamatory statements, obscenities, pornography or that violate the law are not allowed. Comments that promote commercial products or services are not allowed. Comments in violation of this policy will be removed. Continued posting of comments that violate this policy will result in the commenter being banned from the site.