The program to reintroduce bighorn sheep into the Catalina Mountains is about two and a half years old. by Vanessa Barchfield TWEET SHARE 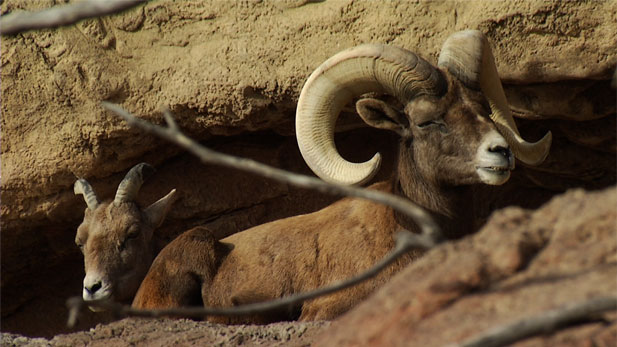 It’s the time of year when bighorn sheep are born, and so far this season the population just outside of Tucson has grown by 18 lambs said Arizona Game and Fish Department spokesman Mark Hart.

"And there may be more that we just haven’t seen," he said.

So how many sheep are in the mountains now?

Arizona Game and Fish has released sheep into the area each November since 2013. Some of those sheep have died after mountain lions attacks, including one in February, and others from an outbreak of pneumonia.

Hart said new lambs are particularly sensitive to human disturbance, so his department is asking people to observe restrictions including not wandering far from trails. Dogs are never allowed in the bighorn sheep management area.

State to Stop Killing Mountain Lions that Prey on Bighorns 29 More Desert Bighorn Sheep Released in Santa Catalinas Pneumonia Kills Fourth Bighorn Sheep in Catalina Mountains
By posting comments, you agree to our
AZPM encourages comments, but comments that contain profanity, unrelated information, threats, libel, defamatory statements, obscenities, pornography or that violate the law are not allowed. Comments that promote commercial products or services are not allowed. Comments in violation of this policy will be removed. Continued posting of comments that violate this policy will result in the commenter being banned from the site.