Wildfire Season Rages on at University Museum of Art 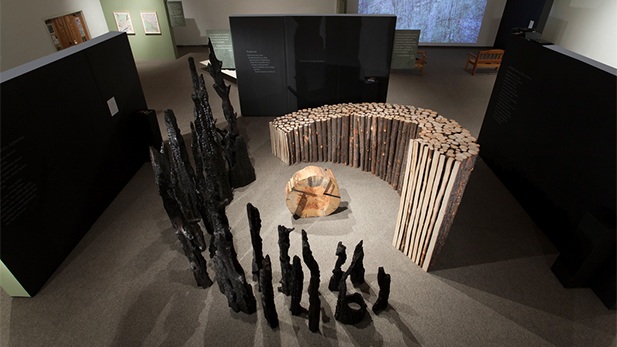 Wildfire season has officially comes to a close, but it roars on at the University of Arizona Museum of Art's "Fires of Change" exhibit, featuring the work of 11 artists.

Before they started to work on their pieces, the artists spent a week with scientists learning about fires in the forests of Northern Arizona in what museum officials call a wildfire bootcamp.

Based on that bootcamp, one artist, Julie Comnick created a series of drawings with charcoal she got from the charred remnants of a wildfire site.

Curator Olivia Miller said that’s what the show is all about:

"The idea that you can take the remnants of this fire and turn it into something beautiful."

Miller said the exhibition doesn’t dwell on the destructive force of fire.

The 11 artists worked across a range of mediums: installation, film, sculpture, even quilting.

"And it’s so fascinating that all of these artists, they went through the exact same bootcamp, yet they each tell the story in a completely different way," Miller said.

“Fires of Change” runs the UA Museum of Art through April 3.

Love, Christmas and Guns Study: Wildfire May Double Erosion in Western Watersheds After 30 Years, Fate of Stolen UA Painting Remains a Mystery
By posting comments, you agree to our
AZPM encourages comments, but comments that contain profanity, unrelated information, threats, libel, defamatory statements, obscenities, pornography or that violate the law are not allowed. Comments that promote commercial products or services are not allowed. Comments in violation of this policy will be removed. Continued posting of comments that violate this policy will result in the commenter being banned from the site.