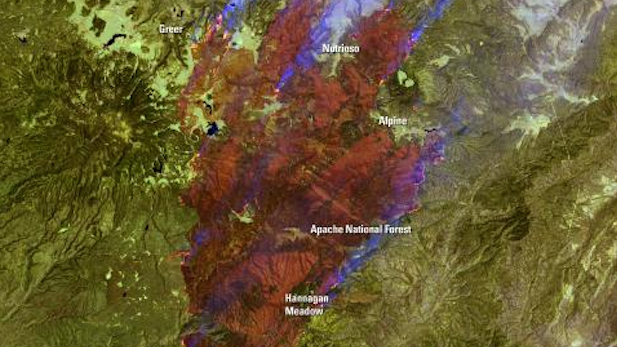 NASA satellite image of the Wallow Fire in Arizona's White Mountains in 2011.
NASA

The U.S. Forest Service has a better view of wildfires from space, thanks to a new agreement with NASA.

The agreement gives wildland fire managers access to data from a satellite imaging system called VIIRS . In the daytime, VIIRS can theoretically detect a flaming fire just 50 square meters, about the size of a small house.

At night, VIIRS can detect a fire one-fifth that size. That’s an improvement on current technology, which routinely detects wildfires about 1,000 square meters in size.

The Forest Service has used satellites to track wildfires since the 1990s. The information helps the agency make decisions about where to allocate firefighting resources at the regional and national level.

Wildfires in the U.S. burn an average of 7 million acres a year. A combination of factors has increased the risk of large, catastrophic fires in Arizona, including drought and unnaturally dense forests.

The Arizona Science Desk is funded by the Corporation for Public Broadcasting and is a collaboration of four NPR affiliate entities in the state.

Meet Outer Space's First Traffic Controller, in Residence at UA Forests Worldwide Vulnerable to Drought, UA Researcher Says 500-Acre Wildfire in Santa Catalinas Being Watched
By posting comments, you agree to our
AZPM encourages comments, but comments that contain profanity, unrelated information, threats, libel, defamatory statements, obscenities, pornography or that violate the law are not allowed. Comments that promote commercial products or services are not allowed. Comments in violation of this policy will be removed. Continued posting of comments that violate this policy will result in the commenter being banned from the site.