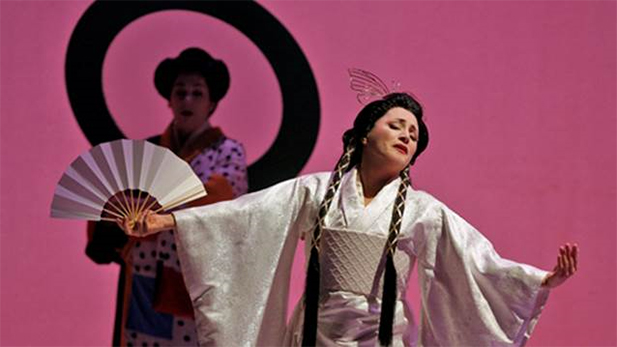 San Francisco Opera broadcasts continue on Classical 90.5 at noon this Saturday, September 5, with a performance of Madama Butterfly by Giacomo Puccini, set to a libretto by Giuseppe Giacosa and Luigi Illica. The performance will be sung in Italian and will run approximately two and one-half hours. Nicola Luisotti conducts.


This beloved opera, which premiered in 1904, has at its heart a Japanese geisha, Cio-Cio-San, known as "Madama Butterfly." In a traditional Japanese ceremony arranged by marriage-broker Goro and in the presence of the American consul Sharpless, Cio-San marries a lieutenant in the U. S. Navy, B. F. Pinkerton. But he doesn't take the marriage seriously and soon returns to America, promising to return "when the robins are nesting." Three years pass, with Cio-Cio-San – along with her maid Suzuki and her little son – waiting for Pinkerton to come back. When he finally does, accompanied by his American wife, Kate, his wish to take his son to America leads to catastrophe for Cio-Cio-San.

Behind the Mask What Americans need to talk about. Rogue Radio presents: Virginia Woolf's "The Mark on the Wall"
By posting comments, you agree to our
AZPM encourages comments, but comments that contain profanity, unrelated information, threats, libel, defamatory statements, obscenities, pornography or that violate the law are not allowed. Comments that promote commercial products or services are not allowed. Comments in violation of this policy will be removed. Continued posting of comments that violate this policy will result in the commenter being banned from the site.