× CORONAVIRUS: The latest coverage and local resources regarding COVID-19 from the Arizona Public Media newsroom.
/ Modified may 22, 2015 8:11 a.m. 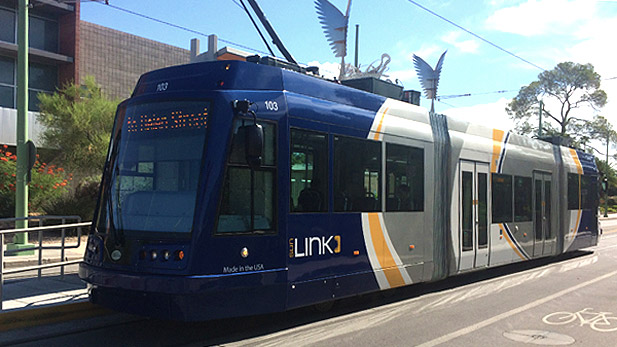 City officials said University of Arizona student Anna Bjornsen became the millionth person to board the streetcar. She won a free pass to the streetcar and Tucson's municipal bus system for one year.

Bjornsen said she regularly uses the streetcar to get to and from class. The streetcar runs along a four-mile route from west of downtown through the university campus and to the campus health complex north of Speedway Boulevard.

The streetcar began running last July and officials say the number of passengers has been running as much as 17 percent ahead of projected ridership.

Live Music on Streetcar? Yes, in Tucson This Summer Sun Tran Seeks Comment on Route Changes Old, Eccentric, Classic– Street Rod Has Broad Definition
By posting comments, you agree to our
AZPM encourages comments, but comments that contain profanity, unrelated information, threats, libel, defamatory statements, obscenities, pornography or that violate the law are not allowed. Comments that promote commercial products or services are not allowed. Comments in violation of this policy will be removed. Continued posting of comments that violate this policy will result in the commenter being banned from the site.