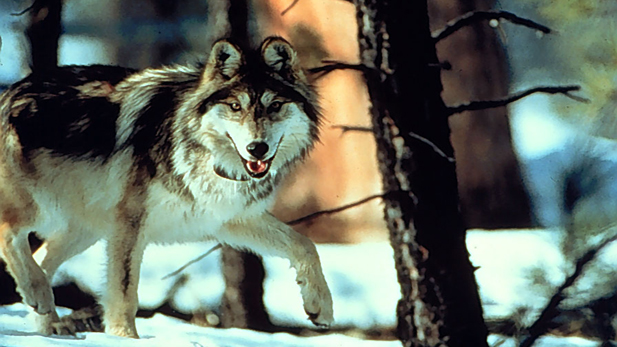 The Mexican gray wolf recovery program is successfully breeding in captivity and genetically planning, after a rough start politically and biologically.

The wolves were near extinction in the late 1970s when federal wildlife officials began a conservation effort. It led to the first release into the wild of captive-bred wolves, in 1998.

"The entire global population of Mexican gray wolves started with only seven wolves," said Maggie Dwire, a biologist with the U.S. Fish and Wildlife Service. "We completely eradicated the Mexican wolf from the wild in the U.S. In the 1970s, we captured what may have been the last remaining wolves in Mexico."

Dwire said in restoring a healthy population, having just seven animals with which to work created a genetic bottleneck. But that wasn’t the species only problem.

"We’ve had one particular wolf achieve such a success out there that nearly all of the wild population is somehow related to her," she said.

In other words, one female wolf super mom is somewhat related to almost all of the roughly 110 animals living in the wild.

And that’s a problem.

Dwire said in response, the agency launched an experimental and work-intensive method of genetic rehabilitation.

It includes an annual two-day meeting at which wildlife managers analyze the results of computer program mapping out the entire population’s pedigree, as they seek a wolf in captivity that will thrive and, more importantly, breed in the wild.

Which is why captive wolves who are the least related to that one wolf super Mom become candidates to reproduce and get transferred into what’s known as a pre-release facility in Sevietta, N.M. There they get conditioned to living in a wild environment and evaluated for potential release.

"One to two effective migrants per generation would help us keep this population on the right trajectory genetically," she said. " So far we’ve seen about a 30 percent success rate, and our most successful type of release has been an adult pair of wolves with offspring."

The Fish and Wildlife Service and the Arizona Game and Fish Department have released about 95 animals since the program began 17 years ago. Population numbers are trending up, increasing by almost 30 animals since last year.

Dwire said while the genetic issues are showing signs of improvement, the species is far from out of the woods in terms of survival, as coexistence with local livestock still remains a hotly debated issue.

New Plan for Mexican Gray Wolf Recovery, 35 Years Later New Idea in 30-Year Effort to Save Mexican Wolf Wildlife Officials Pleased With Growing Mexican Gray Wolf Count
By posting comments, you agree to our
AZPM encourages comments, but comments that contain profanity, unrelated information, threats, libel, defamatory statements, obscenities, pornography or that violate the law are not allowed. Comments that promote commercial products or services are not allowed. Comments in violation of this policy will be removed. Continued posting of comments that violate this policy will result in the commenter being banned from the site.