Almost 7 months after woman went into sanctuary, 'We Stand With Rosa' effort is begun. by Fernanda Echavarri TWEET SHARE 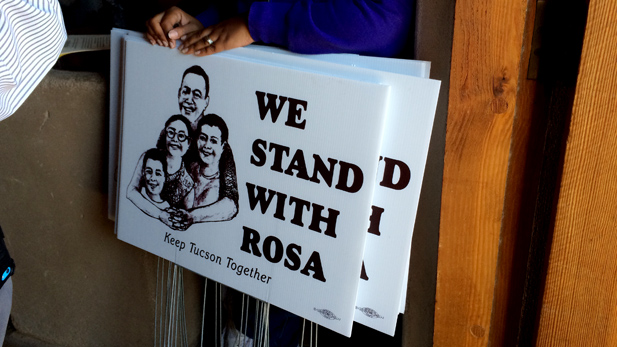 Organizers of "We Stand With Rosa" hope to flood Tucson with signs of support
Fernanda Echavarri, AZPM

Almost seven months after a Mexican immigrant went into sanctuary at a Tucson church, supporters Wednesday launched a campaign asking for her deportation order to be removed.

Rosa Robles Loreto moved in to the Southside Presbyterian Church Aug. 7, and said she will stay there until Immigration and Customs Enforcement closes her case. 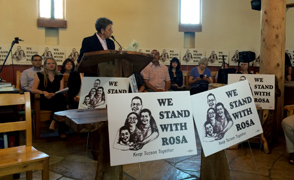 Rosa Robles Loreto's attorney Margo Cowan
Fernanda Echavarri, AZPM
“We’ve been fighting for so long, I’ve been here all these months, I am not going to give up now,” she said. “If I do, all of this wouldn’t have been worth it.”

Dozens gathered at Southside Wednesday to pick up signs and learn about the social media campaign which uses photos of people holding signs of support tagged with #LetRosaStay.

Organizers said they hope to put the national spotlight on Robles Loreto's case.

“We can’t have children learning if they’re constantly in fear that when they go home mom may not be there,” Hernandez Jr. said.

Immigration and Customs Enforcement has said it will not actively seek to deport Robles Loreto but the immigrant's requests to close her case have been denied.

When President Barack Obama outlined his executive action on immigration in November he also directed the Department of Homeland Security to focus on deporting felons not families.

Because Robles Loreto's case is low priority her deportation order should have been removed by now, Robles Loreto’s attorney Margo Cowan has said.

“I have faith things will go well,” Robles Loreto said.

In a separate case, Daniel Neyoy Ruiz was given sanctuary at the church in May and after spending a month there, Immigration and Customs Enforcement granted him a one-year stay in the country.

Woman in Sanctuary at Tucson Church for 9 Months US Senate May Vote on Border Security Funding Tucson Family 'Relieved' to Benefit From Obama’s Immigration Executive Action
By posting comments, you agree to our
AZPM encourages comments, but comments that contain profanity, unrelated information, threats, libel, defamatory statements, obscenities, pornography or that violate the law are not allowed. Comments that promote commercial products or services are not allowed. Comments in violation of this policy will be removed. Continued posting of comments that violate this policy will result in the commenter being banned from the site.