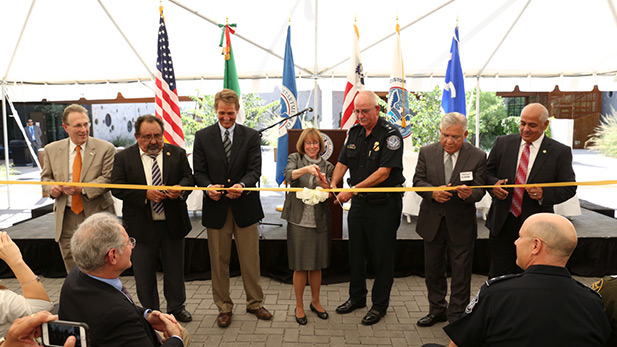 The expanded Mariposa Port of Entry in Nogales has been dedicated in a ribbon-cutting ceremony that drew local, state and federal officials to the border city.

Among them was Republican U.S. Sen. Jeff Flake, who enumerated the importance of the expanded port.

The quarter-billion-dollar expansion has been under construction for several years, and both Mexican and Arizona officials have focused on it as key to building trade, businesses and jobs on both sides of the border.

Flake said what’s already the state’s busiest port of entry has bigger implications than trade with its number one foreign business partner.

“This port is not just Arizona’s main gateway into Mexico. It’s a place where America meets the world," he said.

Trade between Arizona and Mexico totaled $14 billion last year, half in imports and half in exports, according to the Arizona Commerce Authority. Expansion of the port at Nogales is expected to help grow those numbers.

$134M in Improvements Planned for Border Highway Border Truckers Say New Regulation Means Major Revenue Loss 'Mariposa Road' Improvements Moved Up Two Years
By posting comments, you agree to our
AZPM encourages comments, but comments that contain profanity, unrelated information, threats, libel, defamatory statements, obscenities, pornography or that violate the law are not allowed. Comments that promote commercial products or services are not allowed. Comments in violation of this policy will be removed. Continued posting of comments that violate this policy will result in the commenter being banned from the site.