One volunteer calls it 'a moral imperative to help suffering humanity;' he, his partner, take in two for one night. by Fernanda Echavarri Tweet 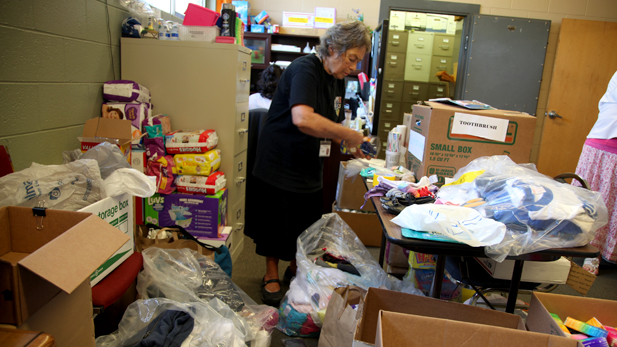 Hundreds of Central American women and children arriving at Tucson's Greyhound bus station downtown are finding a corps of volunteers their to help.

The families, after being detained and processed by Border Patrol, arrive at the station with little or no money and not much more than a small plastic bag with some belongings.

Mike Wilson, like other Tucsonans, has opened his home for the night when the women and children have a bus departing the following day.

“I think it’s a matter of a moral imperative to help suffering humanity and while they’re in our city and in our town it’s our moral obligation to help them as we would like to be helped,” Wilson said. “My partner Susan and I have taken in 40 people total, women and children, most of them from Guatemala.”

Humanitarian aid organizations and consulate representatives from Guatemala, help the women and children reunite with their families in the U.S. Volunteers help arrange the purchase of bus tickets and often call the woman’s relatives across the country. They explain bus routes, translate, and prepare food for the families.

“I can safely say that in the thousands of people who have responded positively I’m aware of one person who took the time to convey negative feelings, and it was a politically based comment,” said Teresa Cavendish, CCS director of operations. “It is a pretty good indication on how Tucson responds on a humanitarian level.”

CCS has received truck-loads of donations from people in Tucson and other parts of Southern Arizona. Monetary donations have been sent from out of town and some boxes with clothing and toiletries have arrived from places such as Tennessee, she said.

“I was born here in Tucson I’ve lived here my whole life and I’ve never been more impressed by my fellow citizens, they have been amazing,” Cavendish said.

Volunteers are leaving politics and policy aside and seeing the migrants as "humans like us," Wilson said.

One of the first families that spent the night at Wilson’s house was a Guatemalan woman and her 8-year-old twins. One of the children had the tip of his index finger cut off by gang members, who were trying to extort money from the boy’s father who was in the U.S., Wilson said.

“When the first lady of Guatemala was here, she stuck to the party line that Guatemalans are coming to the United States to reunite with family and that’s part of it, but she denied many times that it was because of violence in their country,” he said. “Yet, here I have this witness whose fingertip was cut off by gangs, that’s why they left.”

Greyhound has allowed volunteers to block off an area of the lobby and use it to store food, clothing and other donations and use as a resting place for the families. However, the bus station is not open 24 hours and does not allow passengers to stay overnight.

CCS will move the operation out of the bus station by the end of July to a separate building, where migrant families will be able to spend the night.

The number of Central American women and children crossing into the U.S. illegally has reached record highs. White House officials and representatives from governments of El Salvador, Guatemala and Honduras have said the influx can be attributed to an increase of violence in the region, lack of economic opportunities and a desire to reunite with family members.

Mexican Program to Address Central American Migrants Central American Women, Kids Still Arriving at Tucson Greyhound Detention, Trek North May Have Mental Effects On Young Migrants
By posting comments, you agree to our
AZPM encourages comments, but comments that contain profanity, unrelated information, threats, libel, defamatory statements, obscenities, pornography or that violate the law are not allowed. Comments that promote commercial products or services are not allowed. Comments in violation of this policy will be removed. Continued posting of comments that violate this policy will result in the commenter being banned from the site.