Richard Miranda retires after 39 years with the city, 3 years as manager, 10 as police chief. by Andrea Kelly TWEET SHARE

Tucson City Manager Richard Miranda said he was brought in at a time when the city needed stability in leadership, and he accomplished that.

He is retiring July 31, after a 39-year career with the city. He began as a police officer in 1975, and worked his way up through the ranks, eventually becoming police chief for a decade. He retired from that position in 2008 and took an assistant city manager position under then-manager Mike Letcher.

When Letcher was fired in 2011, Miranda was promoted to interim city manager, and then was hired for the permanent position later that year. 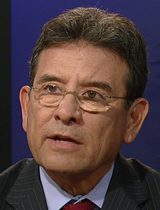 Miranda's successor will be the 10th city manager of Tucson in the last decade, but he said that does not indicate instability in city leadership.

The realities of the job are different than they were for managers who had longer tenures in the past, Miranda said, comparing himself to Joel Valdez. Long-hailed as a good city manager, Valdez ran the city for 14 years in the 1970s and '80s.

That's not realistic anymore because of the constant pressure on managers now, Miranda said.

Miranda said he took the top Tucson job at a time when he needed to build trust and confidence between the public and the city.

In his resignation letter, Miranda said he intends to spend more time with his family. In an interview, he said the time is right for him to leave, but left the door open to pursue other work.

“I’ve been here for about 40 years and I think it’s time to see what’s outside the city of Tucson," he said.

Any of Miranda's three assistant city managers would make a good interim manager to guide the transition, he said.

"I have three really solid assistant city majors who understand what the mission is of our organization and I see their commitment to our community on a daily basis and I think that they have a great foundation to run the city," he said, calling them "perfect people for the job.”

Tucson City Council Asks Public to Weigh In On City Manager Search Tucson Appoints Interim City Manager Tucson City Manager Miranda Announces Retirement
By posting comments, you agree to our
AZPM encourages comments, but comments that contain profanity, unrelated information, threats, libel, defamatory statements, obscenities, pornography or that violate the law are not allowed. Comments that promote commercial products or services are not allowed. Comments in violation of this policy will be removed. Continued posting of comments that violate this policy will result in the commenter being banned from the site.