105K acre feet, under 1% of annual average flow, has been released into delta; much smaller base flow will continue to deliver water to restoration sites over next 4 years. by Vanessa Barchfield Tweet 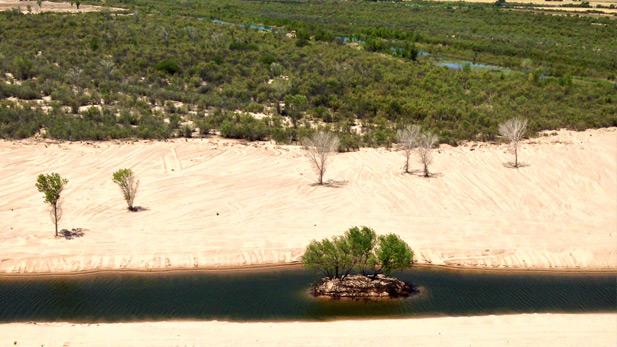 A "pulse flow," the first stage of a pilot project to bring life back to the Colorado River delta, flooded parts of the delta in Mexico’s Baja California state in 2014.
Vanessa Barchfield, AZPM

The first stage of a pilot project to bring life back to the Colorado River delta will come to a close this weekend.

For the past two months, the pulse flow has been flooding parts of the delta in Mexico’s Baja California state.

Water hasn’t flowed regularly in the once-lush delta since 1960. Environmental groups say the drying up of the delta has had a disastrous impact on the region’s ecosystem and the economic livelihood of communities that relied on the water.

A team of environmental groups and academics has been closely monitoring the impact that a flow of water is having on the desiccated region.

The Sonoran Institute’s Francisco Zamora Arroyo said the teams have already observed the return of birds that once flourished in the delta and the establishment of native tree seedlings – though both were expected outcomes.

The pulse flow has released 105,000-acre feet, just under 1 percent of the annual average flow of the Colorado River, into the delta. Though it ends on Sunday, a much smaller base flow will continue to deliver water to restorations sites in the delta over the next four years.

Greenhouse Gas Surprise in Colorado River Pulse Flow Bringing the Colorado River Delta Back to Life Morelos Dam Water Begins Flowing Into CO River Delta
By posting comments, you agree to our
AZPM encourages comments, but comments that contain profanity, unrelated information, threats, libel, defamatory statements, obscenities, pornography or that violate the law are not allowed. Comments that promote commercial products or services are not allowed. Comments in violation of this policy will be removed. Continued posting of comments that violate this policy will result in the commenter being banned from the site.