Hosted by the Candlelighters Childhood Cancer Foundation of S. Arizona, teens experience this high school rite of passage on their own terms. by Vanessa Barchfield TWEET SHARE 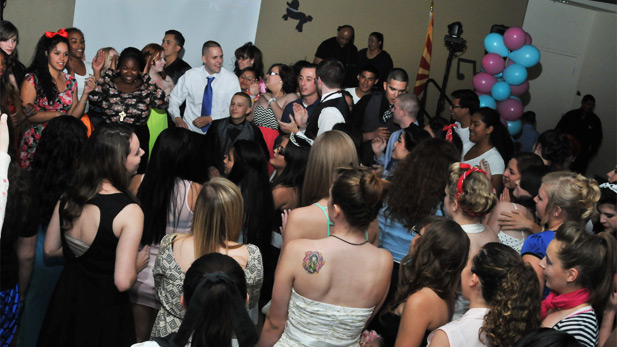 It’s Saturday night, and 18-year-old Samantha Carson is decked out in a long black ball gown.

This is her first time at prom – although she had planned to come in the past few years.

"I even picked out dresses and everything, and then I got sick and couldn’t make it, but now I feel great," she said, stepping outside of the ballroom at Pima Community College's downtown campus.

Carson has been in a years-long battle against Ewing’s Sarcoma – a rare form of bone or soft tissue cancer that’s most prevalent among teenagers. She’s still undergoing chemotherapy and was in the hospital this time last week. But tonight she is ready to dance.

And she’s in good company here.

There’s a DJ, and boutonnieres pinned to boys’ lapels, corsages wrapped around girls’ wrists, a photographer snapping photos of beaming groups of friends by the entrance. All of the vestiges of proms at any high school around the country. But this isn’t a normal high school prom. Tonight’s event is organized by the Candlelighters Childhood Cancer Foundation of Southern Arizona. 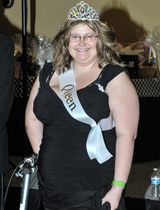 Samantha Carson, 18, has been in a years-long battle against Ewing's Sarcoma, a rare form of bone or soft tissue cancer that's most prevalent among teenagers. (PHOTO: Susan Marie Photography)

This is the ninth annual Candlelighters prom, said Beverley Tidwell, who serves as the group's program director.

The organization also runs a summer camp and throws an annual holiday party. But Candlelighters’ efforts aren’t just social in nature. Tidwell, whose son died of cancer when he was 11, noted the financial strain that the illness places on families.

"Someone probably has to stick with a job to keep insurance. It’s just a really challenging time. By the time you’re finished with your copay, and medical copays and pharmacy copays it’s just a balancing act for everyone," she said. "There are a number of families that just have to declare bankruptcy. The whole experience is really overwhelming."

Carson said the organization has bought her family groceries and helped out with financial issues. And ahead of tonight’s prom, they partnered with the organization Cinderella’s Closet to provide outfits for Carson and the other guests at the prom.

Throughout her treatments, Carson said the hardest part of her illness has been watching it affect her family.

"You don’t go into it alone. Your friends and your family. They don’t have it personally, they don’t go through the chemo and everything, but they're right by your side when you get sick," she said. "So the hardest thing for me is seeing the toll it’s put on them. Seeing how it’s...messing with the plans they’ve had."

Regarding her own plans, Carson said she’s going to her senior prom at Marana High School next month. After graduation, she wants to study sign language interpretation in college. And although bearing children is far too risky for her, eventually she wants a family of her own.

"My greatest wish is to live long enough to be able to adopt," Carson said. "I helped out with my little siblings. Everyone says I’ve got the motherly touch."

Carson headed back into the prom to find her best friend, Kimmy. The girls got their picture taken together, they ate dinner and had Shirley Temples. And, just like at any prom, they danced the rest of the evening.

'The Fight of Her Life:' Young Mom Takes on Chemotherapy Tucson High School's Class of 1945 Celebrates 70th Reunion Prom-O-Rama Gives Hundreds of Dresses Away to Tucson High School Students
By posting comments, you agree to our
AZPM encourages comments, but comments that contain profanity, unrelated information, threats, libel, defamatory statements, obscenities, pornography or that violate the law are not allowed. Comments that promote commercial products or services are not allowed. Comments in violation of this policy will be removed. Continued posting of comments that violate this policy will result in the commenter being banned from the site.