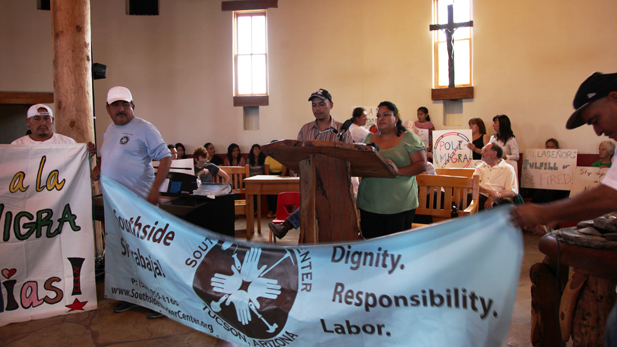 Tucson police conducted a routine traffic stop Tuesday night that led to the arrests of four people. After, a crowd swarmed the site to protest the officers' use of Arizona's anti-illegal immigration law known as SB 1070.

Several protesters were pepper sprayed during the incident, and it marked the second time this year Tucson police have faced protests and then publicly responded to criticism for enforcing the controversial immigration law. 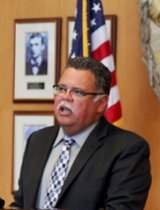 In 2012, the U.S. Supreme Court struck down several parts of the law, but upheld its requirement that police must question a person's immigration status if an officer has reason to believe the person is in the country illegally.

A day after the incident, people upset at police response said the law goes too far.

Raul Alcaraz Ochoa, an immigrant rights activist, said two men were pulled over because one of the lights on their car's license plate was burned out. Because state law requires it, police said they called the Border Patrol when they saw indications the men might be in the country illegally.

After Border Patrol officers arrived on the scene, Alcaraz Ochoa said, community members and activists began protesting the arrests by locking arms at the scene, near the Southside Presbyterian Church, 317 W. 23rd St., a center of immigrant rights activism and where day laborers gather.

In the incident, police hit, shoved and dragged people at the scene, including children and the elderly, Alcaraz Ochoa said.

Tucson Police Chief Roberto Villaseñor said there was no evidence of his officers using excessive force.

"The information that I have show that the crowd was being verbally and physically aggressive, to such a point that the officers felt it necessary to use pepper spray to move them back," Villaseñor said.

Those who protested the arrests Tuesday night said they want police to change tactics and refuse to enforce the law. 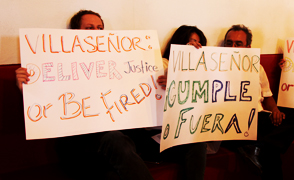 “The community demands that...Villaseñor and the department stop calling Border Patrol," Alcaraz Ochoa said. He would rather see police cite and release people without detaining them and not interrogate passengers in traffic stops.

In February, Tucson police officers pulled over a man who had children in a car without car seats. Police said the man could not provide a valid Arizona driver’s license and showed a Mexican identification card instead.

The man was arrested for having the children unrestrained, and that’s when police called Border Patrol to check his immigration status. Alcaraz Ochoa saw the arrest and placed himself under the Border Patrol car as an act of protest. He was taken to an immigration detention center and was released the following day after proving he was in the U.S. legally.

Soon after his release, about 100 people gathered outside Tucson police headquarters to protest the enforcement of SB 1070.

“These types of events are exactly what I said would happen with this law. It pits law enforcement against the community, and really it’s not a place for local law enforcement," Villaseñor said. "That aside, I don’t get to say 'no I’m not going to enforce that law,' so we will continue to do our job."

There was no comment from the Tucson Sector of the Border Patrol or the Washington, D.C., office of Customs and Border Protection because of the federal government shutdown.

South Tucson Police Change SB 1070 Enforcement Policy Tucson Council OKs SB 1070 Enforcement Changes AZ Business Groups Lobby for Immigration Reform
By posting comments, you agree to our
AZPM encourages comments, but comments that contain profanity, unrelated information, threats, libel, defamatory statements, obscenities, pornography or that violate the law are not allowed. Comments that promote commercial products or services are not allowed. Comments in violation of this policy will be removed. Continued posting of comments that violate this policy will result in the commenter being banned from the site.