Great Plains toads are thriving in an artificial riparian area in central Tucson near the Kino Sports Complex, but invasive bullfrogs have been threatening the Arizona-native species. 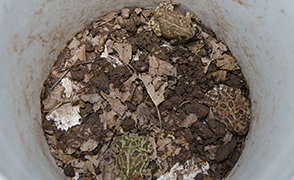 “We have seen several hundred adult Great Plains toads here this year, which is a great population and probably the biggest in Tucson now," said Phil Rosen, a University of Arizona herpetologist.

Pima County contracted Rosen and his team of university biologists to remove bullfrogs that are harming native toads, frogs and other wildlife.

Adam Barkalow, a wildlife biologist, is part of the team working to eradicate bullfrogs at the county's Kino Environmental Restoration Project, a 160 acre storm water harvesting facility and artificial wetland.

“It’s not really the bullfrogs' fault," he said. "It’s just that they are non-native and don’t belong (in the state). Adult bullfrogs can eat all kinds of native animals including snakes, birds, bats, mice, insects, and other amphibians...they can have a big impact on an ecosystem.”

Barkalow and the other biologists hunt the bullfrogs at night. He said, to capture one, he blinds it with a light, and either scoops the creature up by hand or with a net. Then, the captured bullfrogs are put into containers to be euthanized back at the lab.

Pima officials said bullfrogs were first discovered in KERP five years ago. Since then, the invasive species has moved downstream, and is threatening native wildlife in the Santa Cruz River.

The county is not sure how the bullfrogs got in the restoration area, but Rosen said he thinks people probably released them to establish a viable food source. 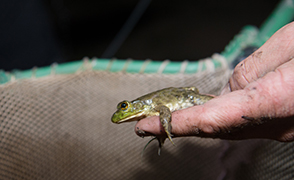 “Believe it or not, we actually met somebody in here hunting bullfrogs one night," Rosen said. "They were going to eat them."

Rosen and his team began removing bullfrogs from the area in late May of this year. So far, they've removed more than 1,400 of them.

Barkalow said their goal is to make KERP an oasis for native wildlife in Tucson.

"This much space and this much water in the middle of Tucson is fairly unique," he said. "The end goal is to have a diverse ecosystem here (at KERP), rather than one just dominated by bullfrogs.”

Rosen said he is excited to see native spadefoot toads, which are actually frogs, also making a comeback in the area. He described this frog as a quintessential desert amphibian that only needs a small pool of water to breed.

“We thought that the bullfrogs had completely eradicated (the spadefoot population)," he said. "So it’s kind of nice to see that at least a few are still around, and that they will likely repopulate this place.”

Rosen said the ponds in the artificial restoration area are home to at least four native toad and frog species. And, he said he hopes other native wildlife will eventually call this place, home.

Pima County may call Rosen and his team back next year if more bullfrogs are found in KERP.

Invasive Snail Threatens Ecosystem of Arizona's Salt River Feral Cats Make List of Invasive Species in the West Buffelgrass, Threat to Desert Habitat, Cultivated South of the Border
By posting comments, you agree to our
AZPM encourages comments, but comments that contain profanity, unrelated information, threats, libel, defamatory statements, obscenities, pornography or that violate the law are not allowed. Comments that promote commercial products or services are not allowed. Comments in violation of this policy will be removed. Continued posting of comments that violate this policy will result in the commenter being banned from the site.