Pima County is working on a $185 million project to update its Roger Road wastewater treatment facility.

When the work is finished in early 2014, the sewage treatment plant will meet Environmental Protection Agency standards for the amount of nitrogen, ammonia and other contaminants in the treated water, and will be able to meet future standards for phosphorous.

The plant is one of 10 in the county, and the reconstruction of this facility is part of a larger county facility upgrade, said Jackson Jenkins, the county's wastewater director.

As part of the project, known as the Regional Optimization Master Plan, or ROMP, the Ina Road wastewater treatment plant is also being upgraded, as is the pipe that connects the two facilities.

Listen to the story:

The upgrades also allow the county to treat more wastewater each day than it does now, with the ability to treat more in the future as the Tucson metropolitan area grows, Jenkins said.

The new facility will clean the water with a different process than the old Roger Road wastewater treatment plant, said Ken Shelor, the county's project manager.

Part of that new technology includes a different way to remove odors from the process, something many who live or drive near I-10 and Roger Road may notice.

First, some things that shouldn't be in the wastewater are removed, such as wood boards, plastic bags, Shelor said.

Then the air, the smelly part of the wastewater treatment process, is pushed through a system of rocks with bacteria growing on them.

"The air will come in, get blown by big fans through the rock and bacteria on the rock will eat up the sulfur compounds so that the air coming out of the stack will be clean air with no odors," Shelor said.

After that, the wastewater moves to what's called a bioreactor, which breaks down the solids using bacteria. It is a five-step process that alternates with and without oxygen, said Greg Fischer, the project manager for the contractor CH2M Hill.

The alternating system is effective, he said, and marks the centerpiece of the new cleaning process. During the oxygenated steps, the bacteria grows, and then during the steps without oxygen, the bacteria consumes the waste.

All this work is paid for by county sewer customers. The sewer bill appears on many people's water bills.

The county sold bonds to pay for the work, and those bonds, which work like a loan, will be paid back with increases in sewer rates.

For the last three years, sewer rates have gone up by more than 10 percent a year, and next July another increase is scheduled. That is the last scheduled increase to pay for this construction.

Though people may feel like the rates have skyrocketed, they're not out of line with other communities, Jenkins said.

"In the early 2000s, we were one of the lowest sewer rates in the country," he said. Now the county wastewater charges are "getting closer to the midpoint or the average sewer rates amongst the nation."

After the final increase goes into effect next summer, the average residential customer will pay about $40 a month for the wastewater service, he says.

When the project is complete, the construction contractor CH2M Hill will take over operations. It will be the first Pima County wastewater treatment plant not run by county officials. 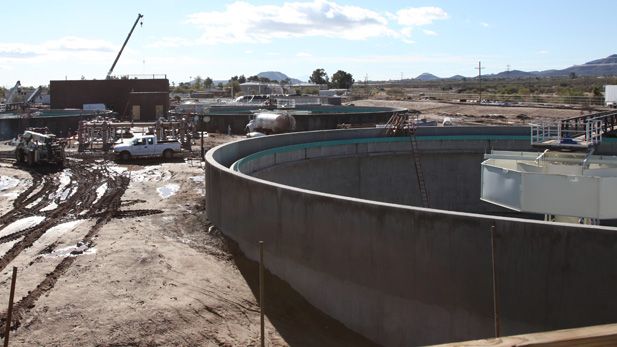 Daily news roundup: No new coronavirus deaths reported by state, impact of census strong in AZ 'It's not enough': Pima County Latino communities search for COVID-19 testing, care Work starts on new section of border wall in national wildlife refuge
By posting comments, you agree to our
AZPM encourages comments, but comments that contain profanity, unrelated information, threats, libel, defamatory statements, obscenities, pornography or that violate the law are not allowed. Comments that promote commercial products or services are not allowed. Comments in violation of this policy will be removed. Continued posting of comments that violate this policy will result in the commenter being banned from the site.