As polls show him trailing in Arizona, Trump stops in Phoenix to woo Latino voters 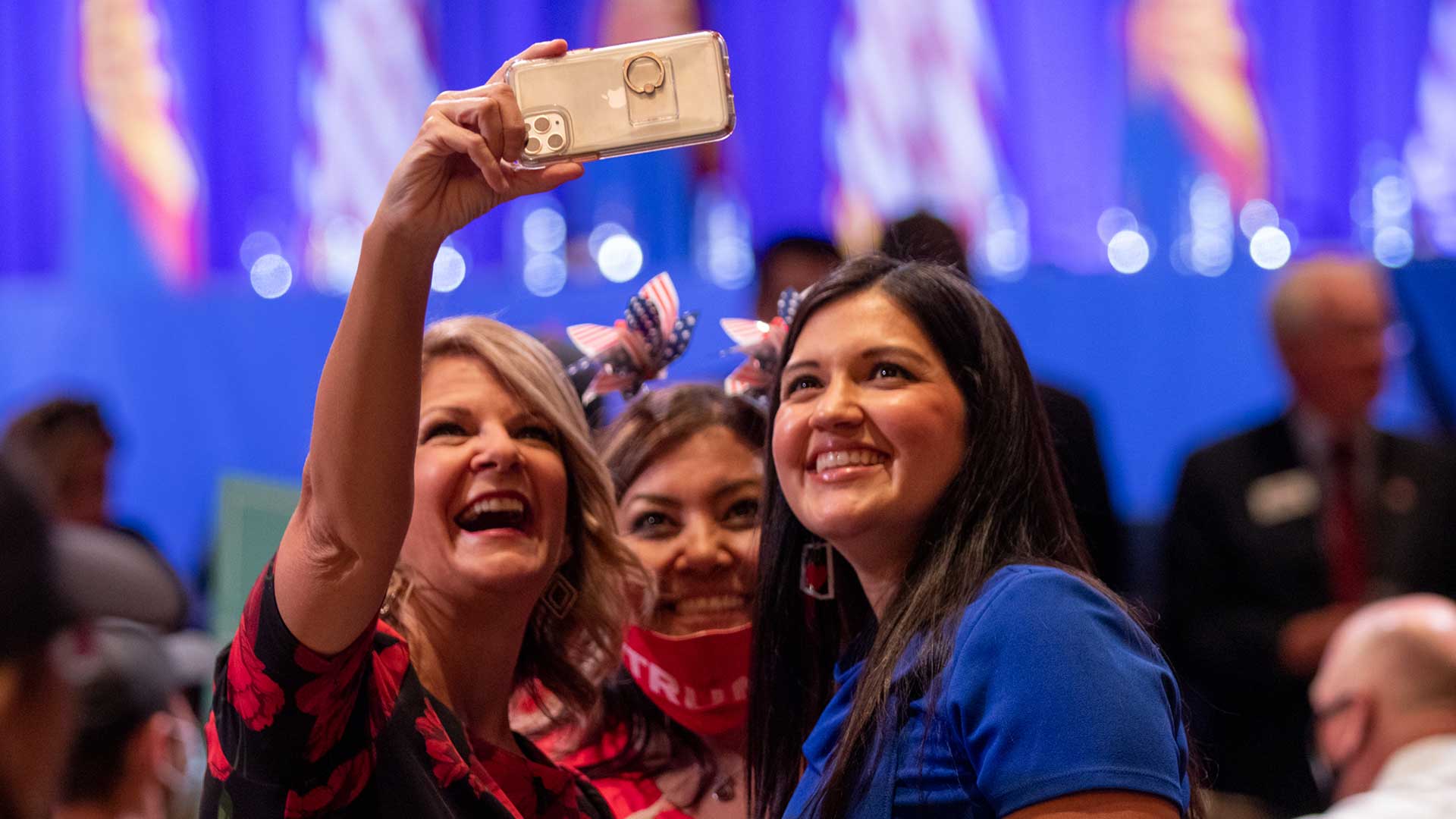 Arizona Republican Party Chairwoman Kelli Ward snaps a selfie with supporters of President Donald Trump at a Latinos for Trump event in Phoenix, Monday, Sept. 14. Like Ward, most of those attending the roundtable were maskless.
Luke Simmons/Cronkite News

PHOENIX – With polls showing him trailing in the state, President Donald Trump stopped in Phoenix on Monday to woo a key demographic that could make or break the November election and determine whether Arizona flips from red to blue: Hispanic voters.

The back-to-back events illustrate just how big a role Arizona’s Hispanic voters — and the state itself — are expected to play on Election Day.

“Hispanic Americans strengthen our nation beyond description,” Trump told hundreds in attendance — most of whom did not wear face masks. “You protect our nation as brave members of the military and as members of law enforcement. You uplift the communities and promote our shared values of faith and family, community, hard work and patriotism.

“You’re an amazing group of people.” 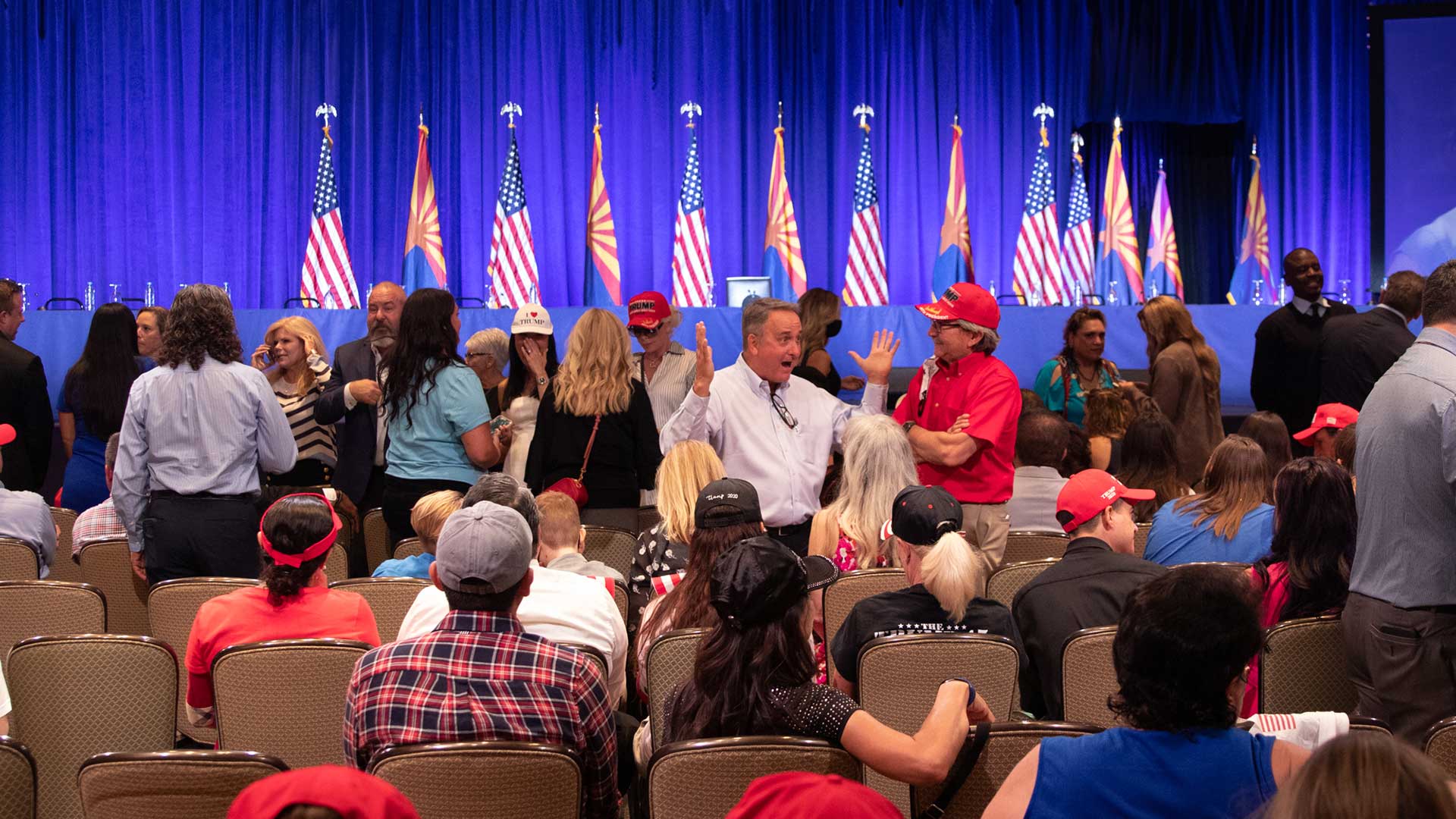 The president’s words stood in stark contrast to some of his policies and past portrayals of Latino immigrants. When he announced his candidacy in June 2015, Trump portrayed immigrants from Mexico as “bringing drugs, they’re bringing crime, they’re rapists, and some, I assume, are good people.”

His efforts to build a “big, beautiful” wall along the southern border and hard-line immigration policies, such as family separation of migrants, have further put him at odds with some Hispanic voters. National polls show Democratic nominee Joseph Biden leading among Hispanics, although Trump recently has been gaining ground in the key state of Florida.

“The issue of hate is clear,” Gutierrez said at a news conference with other Arizona Democrats ahead of Trump’s appearance. He pointed to the immigration policies and past rhetoric by Trump perpetuating racist stereotypes of Latinos coming in illegally to destroy the country.

“He’s repeated those acts over and over again,” Gutierrez said.

For the first time this year, according to the Pew Research Center, Latinos are expected to be the largest racial or ethnic minority voting in a presidential election. A record 32 million Hispanics are projected to be eligible to vote, or 13.3% of all eligible voters.

In Arizona, Latinos comprise about 24% of eligible voters. That’s the fourth-highest percentage in the nation, according to Pew, behind New Mexico, California and Texas.

“Given that it is obviously going to be a very, very close race in Arizona and throughout the country,” winning the Hispanic vote is critical, said Rodney Hero, director of the Center for Latina/os and American Politics Research at Arizona State University.

Biden leads Trump in Arizona by 10 percentage points, according to the latest poll released Monday by OH Predictive Insights. Other recent polls, including a Fox News poll released earlier this month, also have shown Biden ahead in the state – making Trump’s courtship of Hispanics even more key.

Supporters at Monday’s roundtable pointed to family values, religious views and social issues, including abortion, as essential reasons for backing Trump. Some who lined up hours ahead of the event chanted: “Vote your faith.”

“That’s one of the things we always put first, our faith,” said Felix Moreira, a Tucson mechanic. “That’s more important to us than anything.”

Anthony Skeet of Phoenix, who is both Native American and Latino, also said he supports Trump because of his faith.

“I’m a Christian, so he supports my values,” Skeet said. “People can say whatever they want about him, but at the end of the day, he’s getting the job done.

“I think a lot of the anti-(Trump) sentiment is … about border security. He’s not anti-immigrant, he’s not anti-Hispanic, he’s not racist. He’s just protecting the border.” 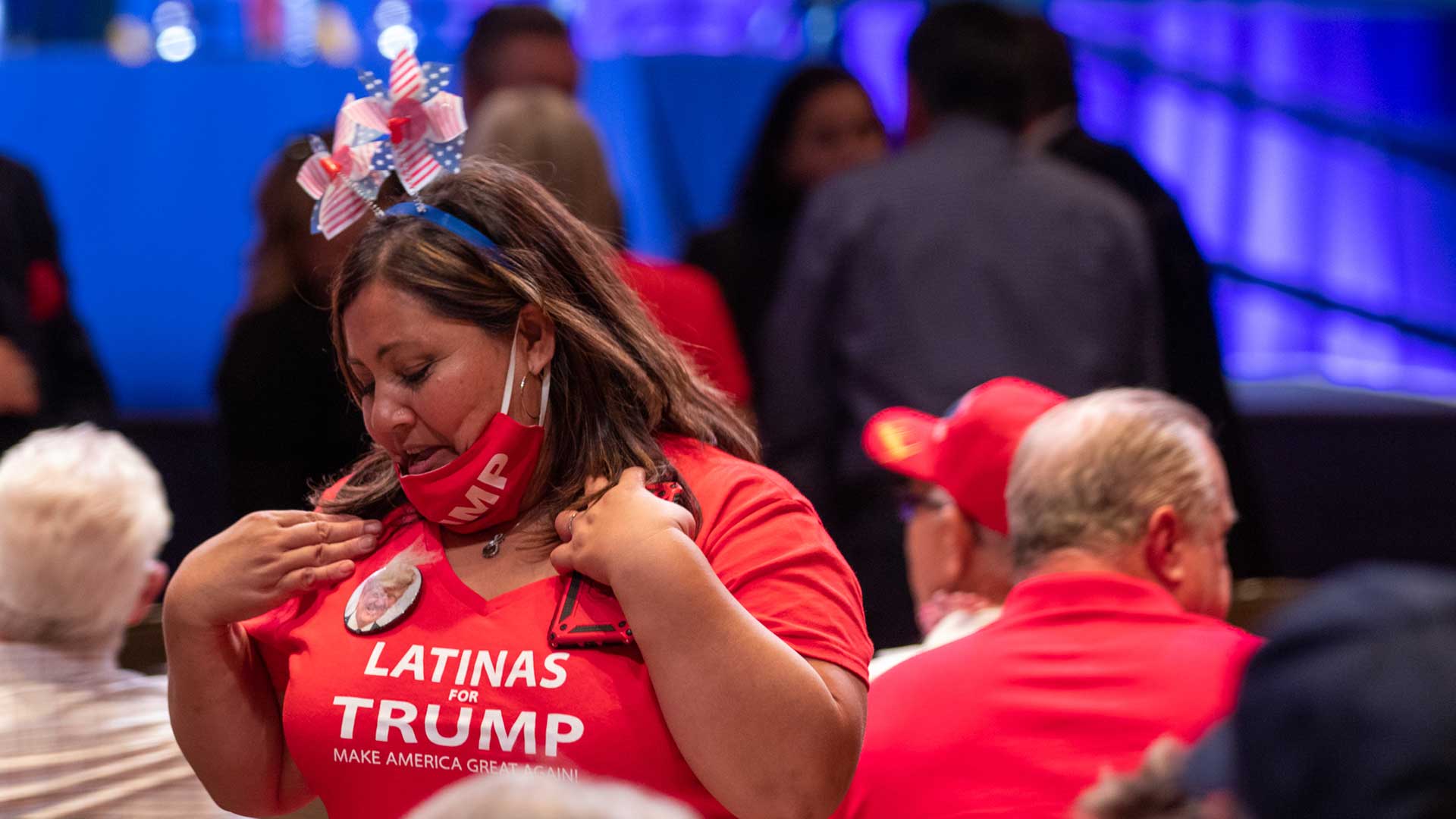 Nationally, a record 32 million Hispanics are projected to be eligible to vote come November. In Arizona, Latinos comprise about 24% of eligible voters, making them an essential voting bloc for both Democrats and Republicans.
Luke Simmons/Cronkite News

Some on the panel sought to counter the idea that Hispanics won’t support Trump.

Latinos like “the straightforward way of talking that you have,” Jorge Ramos told the president. Ramos owns Sammy’s Mexican Grill in Catalina, north of Tucson. “My support for you, more than anything, is because you show so much love for this country.”

Ahead of Trump’s appearance, Arizona Democrats denounced the president’s policies, pointing to an ineffective COVID-19 pandemic response that has disproportionately affected Hispanics and other people of color. An April Pew study reported that about half of Hispanics lived in a household where someone took a pay cut or lost a job as a result of COVID-19.

Trump’s appeals to Latino voters are “an act of desperation,” said state Sen. Rebecca Rios, whose district includes the majority-Hispanic town of Guadalupe. The town was hit hard by COVID-19, with rates more than four times higher than surrounding Maricopa County.

“Trump is completely out of touch with the realities that Latino working families are facing,” Rios said.

Hispanics account for at least 30% of reported COVID cases in Arizona, compared with 24% among whites, and Hispanics represent 31% of COVID deaths, according to the state Department of Health Services.

“Instead of working to help working families, Trump is solely focused on funneling relief money to the rich and the well-connected,” Rios said. “Trump’s failed response has treated our essential workers like they’re disposable, and it’s a disgrace.”

In the 2018 midterm elections, Democrats in the state won six of nine seats in Congress, including two formerly held by Republicans. Nationally, that election saw higher voter turnout overall, according to the Census Bureau, and a 13 percentage point increase in Hispanic voters compared with the 2014 midterm.

How Trump’s message lands with some Latino voters News roundup: Trump to hold rally in Tucson, counties clear marks for partial reopenings Fake news a growing threat in 2020
By posting comments, you agree to our
AZPM encourages comments, but comments that contain profanity, unrelated information, threats, libel, defamatory statements, obscenities, pornography or that violate the law are not allowed. Comments that promote commercial products or services are not allowed. Comments in violation of this policy will be removed. Continued posting of comments that violate this policy will result in the commenter being banned from the site.