Democrats and Republicans expect Arizona to be up for grabs in the November general election. by Farah Eltohamy, Cronkite News TWEET SHARE 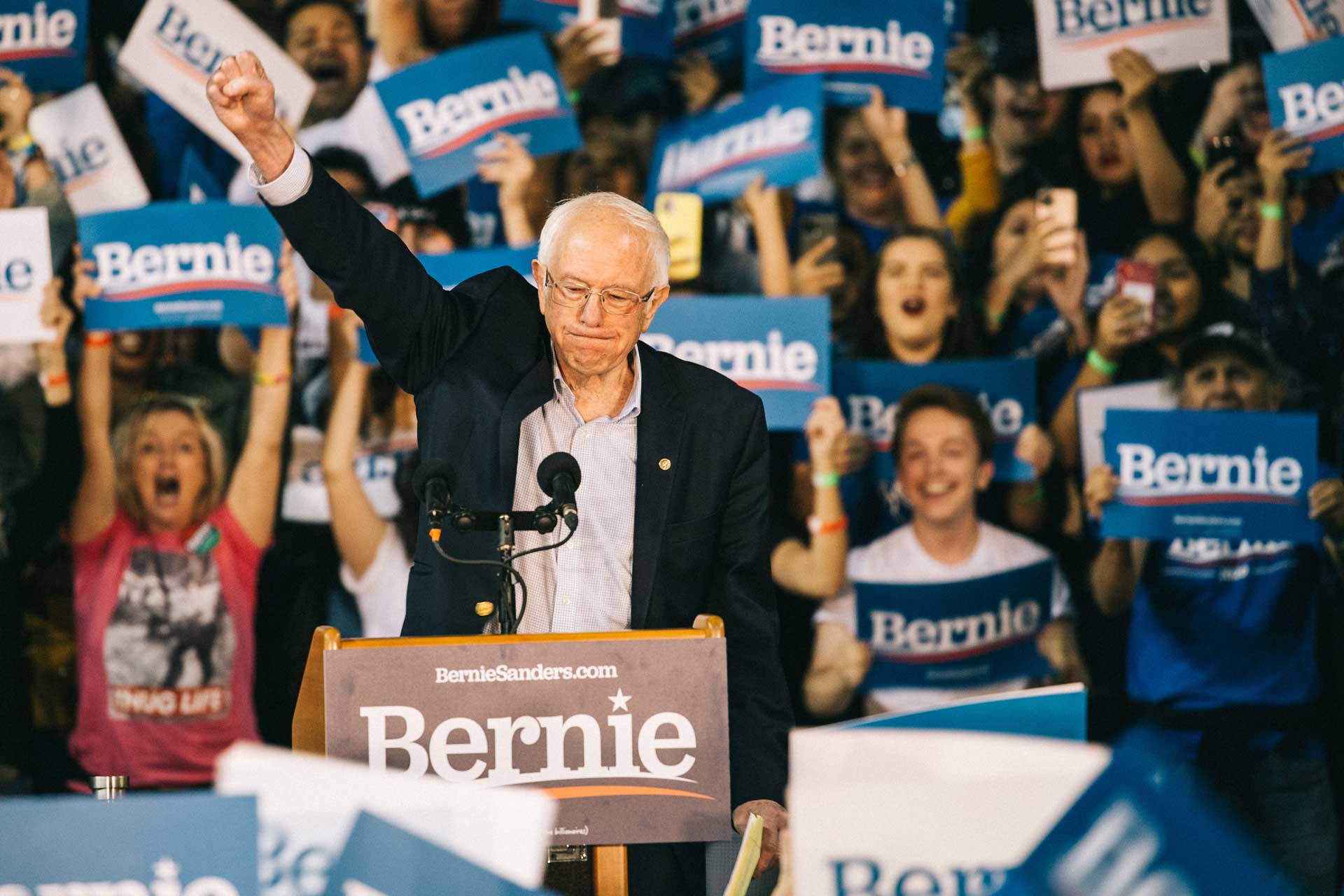 PHOENIX – Sen. Bernie Sanders rallied exuberant supporters Thursday night in his first visit to Arizona for his 2020 presidential campaign, speaking to a growing progressive movement in Arizona some community activists say is spurred by years of anti-immigration policy.

“Let us do everything we can to make sure Arizona has the highest voter turnout in the history of the Arizona primary,” said Sanders, an independent from Vermont who’s seeking the Democratic nomination. The crowd of thousands roared back, the sound booming throughout Arizona Veterans Memorial Coliseum. Supporters – young and old, Native Americans and members of the LGBTQ community – flashed blue “BERNIE” signs.

Two weeks earlier, President Donald Trump stood in that same arena in Phoenix – as he roused seas of impassioned supporters in red “Keep America Great” hats and T-shirts – to secure the Arizona vote ahead of his re-election bid.

Democrats and Republicans expect Arizona to be up for grabs in the Nov. 3 general election. In recent years, the historically red state has been experiencing waves of progressive efforts, especially among Latino community organizers, looking to instill change in the decade following Arizona’s most notorious piece of legislation, SB 1070, which will turn 10 years next month.

Republicans, followed by registered independents, still outnumber Democrats in Arizona, but registration for Democrats has surged in recent years.

The Vermont senator, considered to the far left in politics, spent time taking jabs at Joe Biden, his rival for front-runner status for the Democratic nomination. Sanders discussed signature issues like Medicare for all and free college and railed against income inequality that leaves wealth in the hands of a few.

He disparaged what he called the “billionaire class.” Sanders’ campaign is built on coalescing a grassroots effort of the working class, multiple people and diverse ethnic groups.

Sanders’ visit to Arizona was fresh from Super Tuesday, leaving Sanders and Biden dueling over delegates.

The eleventh debate in the Democratic presidential primary will be held March 15 at the Arizona Federal Theatre in Phoenix, the former Comerica Theatre. The Presidential Preference Election, which takes place two days later, is open only to registered Democrats.

Sanders’ victory in delegate-rich California on Super Tuesday was credited to a wave of Latino voters showing up at the polls.

At Thurday’s rally, members of one Phoenix activist group, Living United for Change in Arizona (LUCHA), supported Sanders because they say he commits to the protection of underserved groups, especially undocumented immigrants.

Randy Perez, LUCHA’s democracy director, said the organization went through a member-driven endorsement process where nearly 94% of the committee voted to endorse Sanders.

LUCHA membership organizer Stephanie Maldonado was one of the speakers who introduced Sanders onstage. She told the crowd she hopes this “resilient community” of post-SB 1070 activists will help Sanders win the Arizona preference contest.

Sanders’ anti-establishment message and left-leaning policies helped secure his popularity among voters younger than 45, reflected among supporters who lined up hours before the rally in the midday sun. They wore “Indie” style – vintage high waisted jeans, clunky Doc Martens and dyed hair – and exuded enthusiasm.

Two high school students, Alexandria Rodriguez, 17, and Jake Waller, 18, said they represent a larger movement among first-time voters who believe Arizona’s status as a red state is about to end. 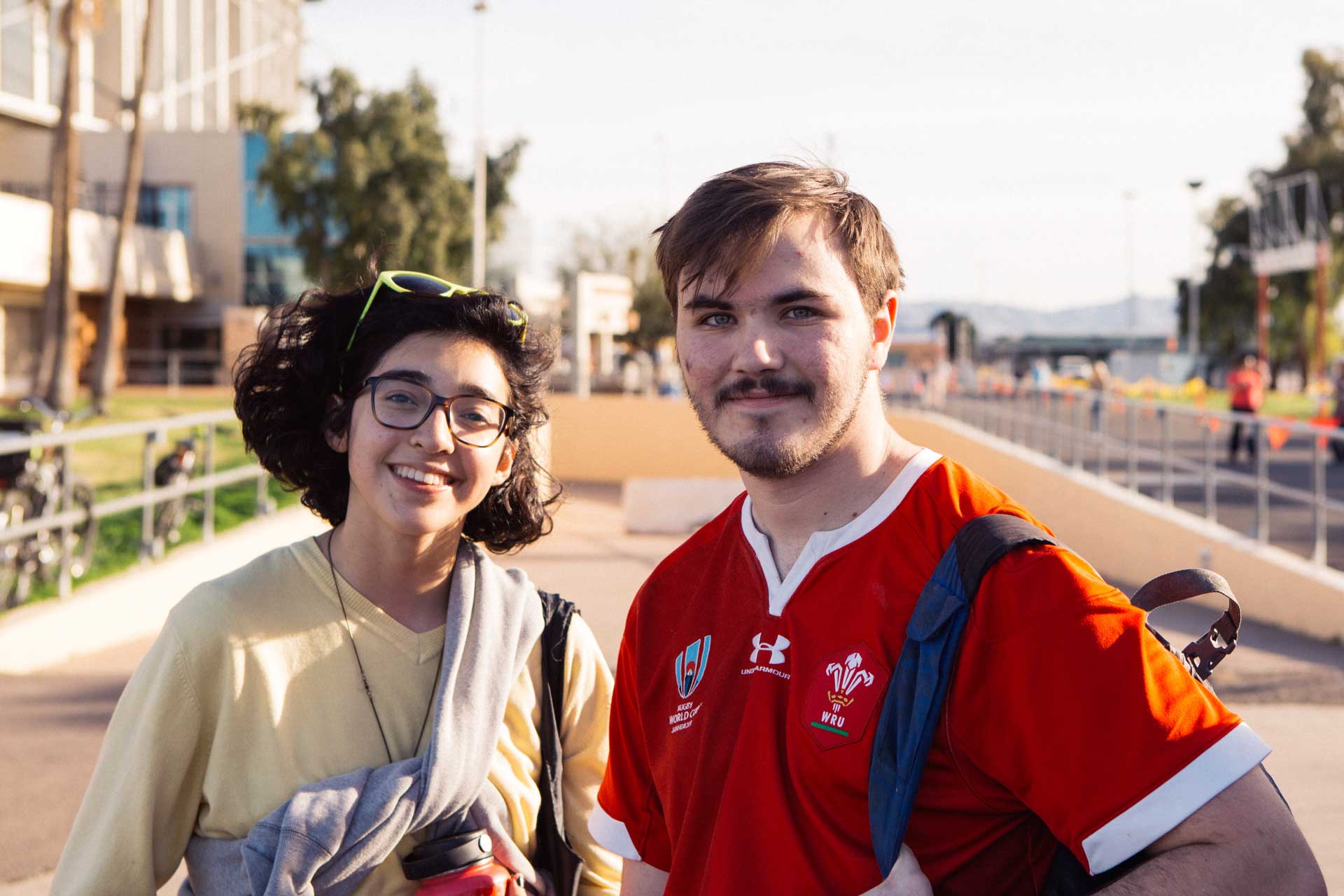 “I know across the board community organizations all over Arizona have been committing to efforts getting people to vote, and registering students to vote specifically and getting all the votes we can to truly represent our state and what we believe in,” Rodriguez said.

“I think we’re going to turn blue, blue by 2020 was a big goal here in Phoenix. And I’m excited to see it happen, live through it.”

Sanders’ message also resonates among some Muslim-American voters. A report from the Council on American Islamic Relations found that Sanders won 58.2% of the Muslim vote on Super Tuesday.

And for the first time in Iowa history, mosques served as caucus sites, with one mosque that unanimously voted for Sanders.

Uzma Jafri, a Phoenix physician, said she is working to get more Muslims to vote.

“Bernie’s the only guy who comes out and says the truth about what is happening to Palestinians,” she said, an issue that’s key among Muslim voters.

Sanders also received support from Native American at the rally. Signs reading “O’odhams for Bernie” and “Protect Sacred Land” were spotted in the crowd. And members of the Tohono O’odham Nation performed a dance before Sanders’ appearance. 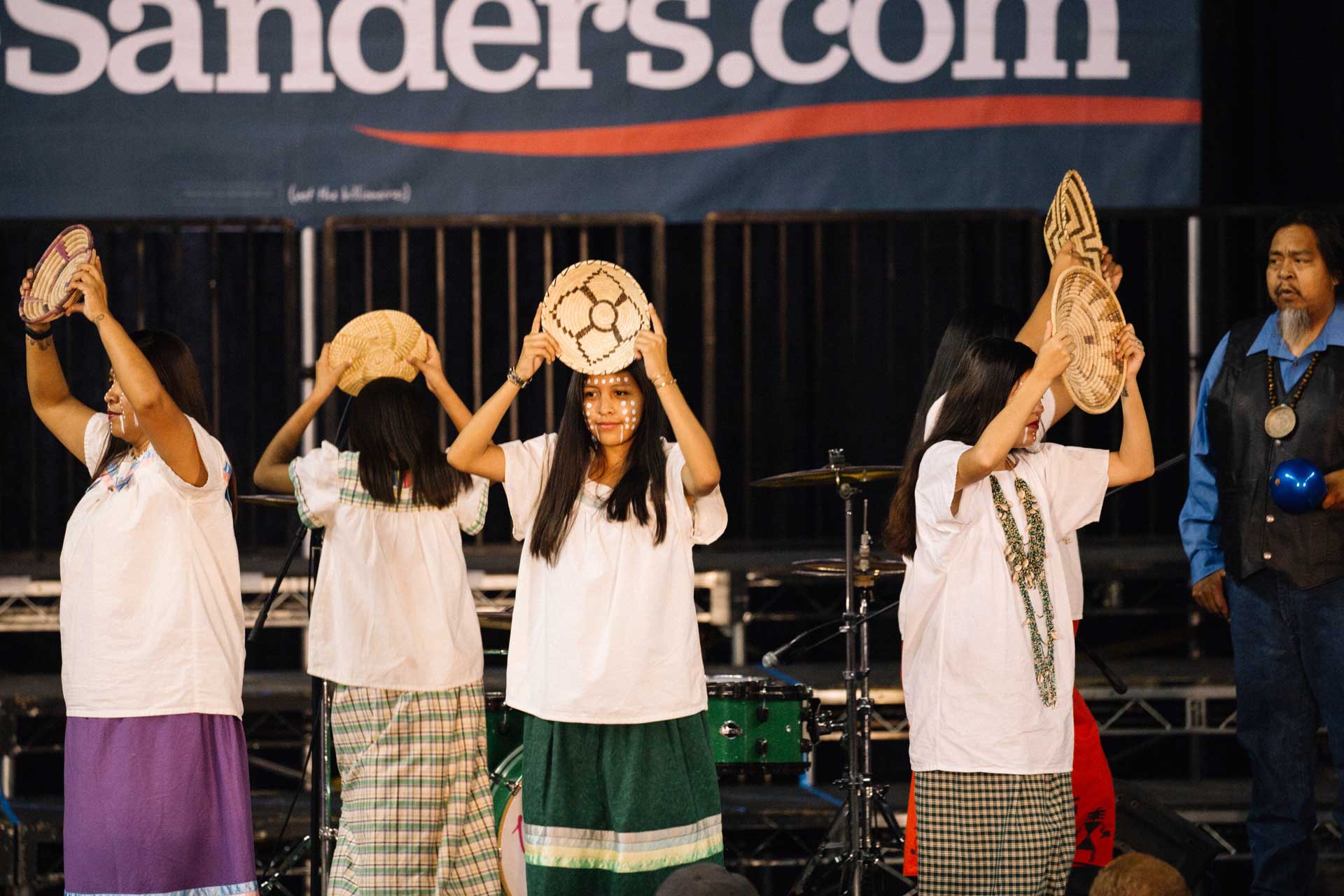 Sanders acknowledged Sen. Elizabeth Warren dropping out of the Democratic race, narrowing the battle for the nomination to Sanders and Biden.

If Biden wins the nomination, Sanders would have his back and hoped, in turn, that Biden would support him to make sure Trump is limited to a single term in the White House.

Then Sanders took the knives out. He compared his record with Biden’s, stretching back years.

“When George W. Bush and (Dick) Cheney were telling us that we needed to invade Iraq,I proved that they were lying and I vigorously opposed it,” he said. “Joe Biden voted for the war in Iraq.”

He also dug at Biden for supporting “disastrous trade agreements,” referring to the North American Free Trade Agreement, passed in 1993.

Sanders, who is known for his attacks against the wealthy, said that the Emergency Economic Stabilization Act of 2008 led to millions of people losing their jobs and life savings “because of the greed and irresponsibility on Wall Street.”

Delivering a message to Biden, he said: “If you want to bail out, go to your billionaire friends and get a bail out.” The crowd roared.

Earlier in the rally, cheers quickly turned into boos when an unidentified protester waved a Nazi flag in an upper corner of the stadium. Nearby rally-goers ripped the flag from his hands, and Arizona Department of Public Safety troopers quickly removed him from the arena.

The moment was memoralized on social media, where many denounced it as an act of anti-Semitism that raises concerns over his safety. If elected, Sanders would be the first Jewish president in U.S. history.

Sanders, who didn’t see what happened until troopers arrived, told the crowd, “Whoever it was, I think they’re a little outnumbered tonight” and returned to his speech.

Unlike Trump, who focused on Arizona issues during his Phoenix rally, Sanders touched on main campaign themes, including his signature Medicare for all plan, universal free college, prison reform and immigration policy.

If elected, he promised to immediately pass “what should have been passed decades ago” – bipartisan comprehensive immigration reform and a guaranteed path to citizenship for Dreamers. 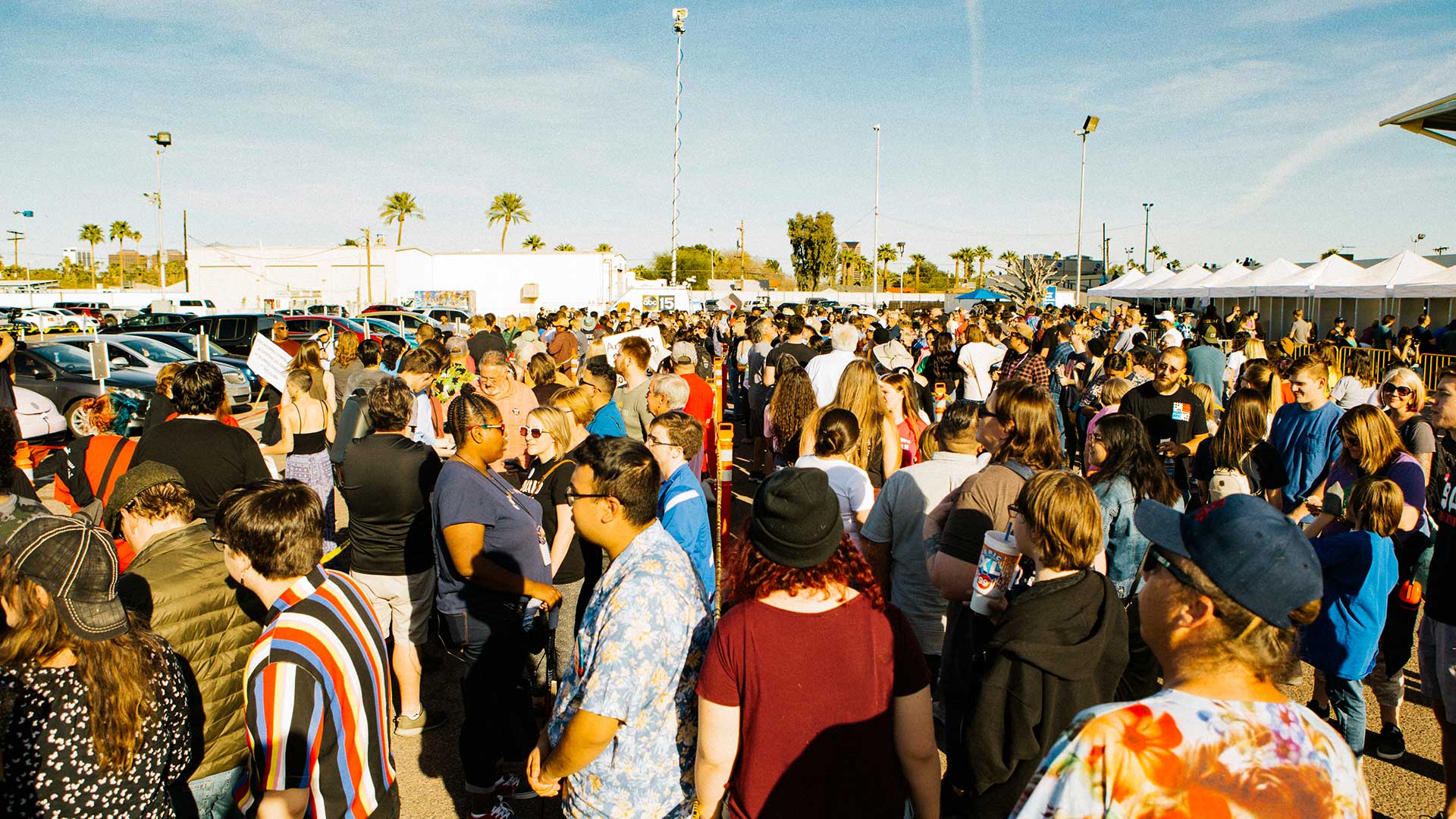 Wins in Iowa, New Hampshire and Nevada cemented Sanders’ position as a frontrunner. But after a lull in the polls for the first few rounds of the primaries, Biden gained momentum last week after a landslide victory in the South Carolina primary.

As results from Super Tuesday filed in, Biden took the lead after endorsements from former Democratic candidates and fellow moderates, including Amy Klobuchar, Beto O’Rourke and Pete Buttigieg – demonstrating a greater attempt on behalf of Democratic centrists to embrace a moderate platform and reject emerging progressive voices in their party. African American voters also backed Biden on Super Tuesday.

Bolding runs for Sec. of State Retired Gen. McGuire jumps into Arizona Senate race Controversial audit of 2020 election hits hand-count milestone
By posting comments, you agree to our
AZPM encourages comments, but comments that contain profanity, unrelated information, threats, libel, defamatory statements, obscenities, pornography or that violate the law are not allowed. Comments that promote commercial products or services are not allowed. Comments in violation of this policy will be removed. Continued posting of comments that violate this policy will result in the commenter being banned from the site.