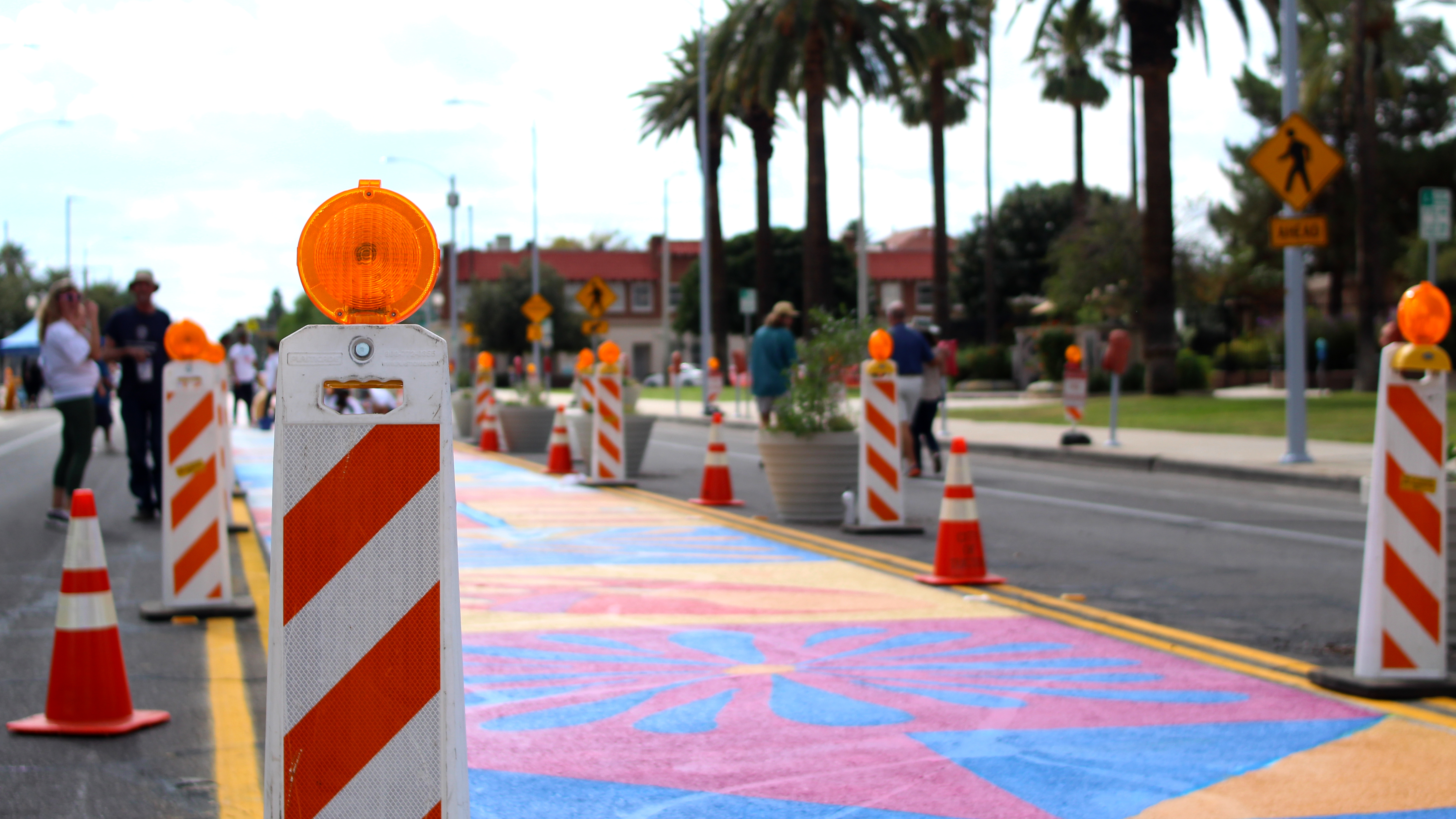 Traffic cones surround a new median that is being painted into a mural on Saturday, Oct. 22, 2022 at 6th avenue in downtown Tucson. Hundreds of people showed up for the all day block party to leave their mark on the ground.
Paola Rodriguez/Arizona Public Media

Volunteers did not have to wait long to see their paint dry as the Arizona sun grazed a new mural that was painted onto 6th avenue Saturday.

Hundreds of people showed up in their least favorite clothes to get down and dirty to paint. In an effort to increase pedestrian safety, Tucson’s Department of Transportation and Mobility partnered with Living Streets Alliance to create a new mural in between Armory Park and the Children’s Museum Tucson. The initiative comes after the city of Tucson was one of 26 cities to receive a $25,000 grant from the Bloomberg Philanthropies’ Asphalt Art Initiative. 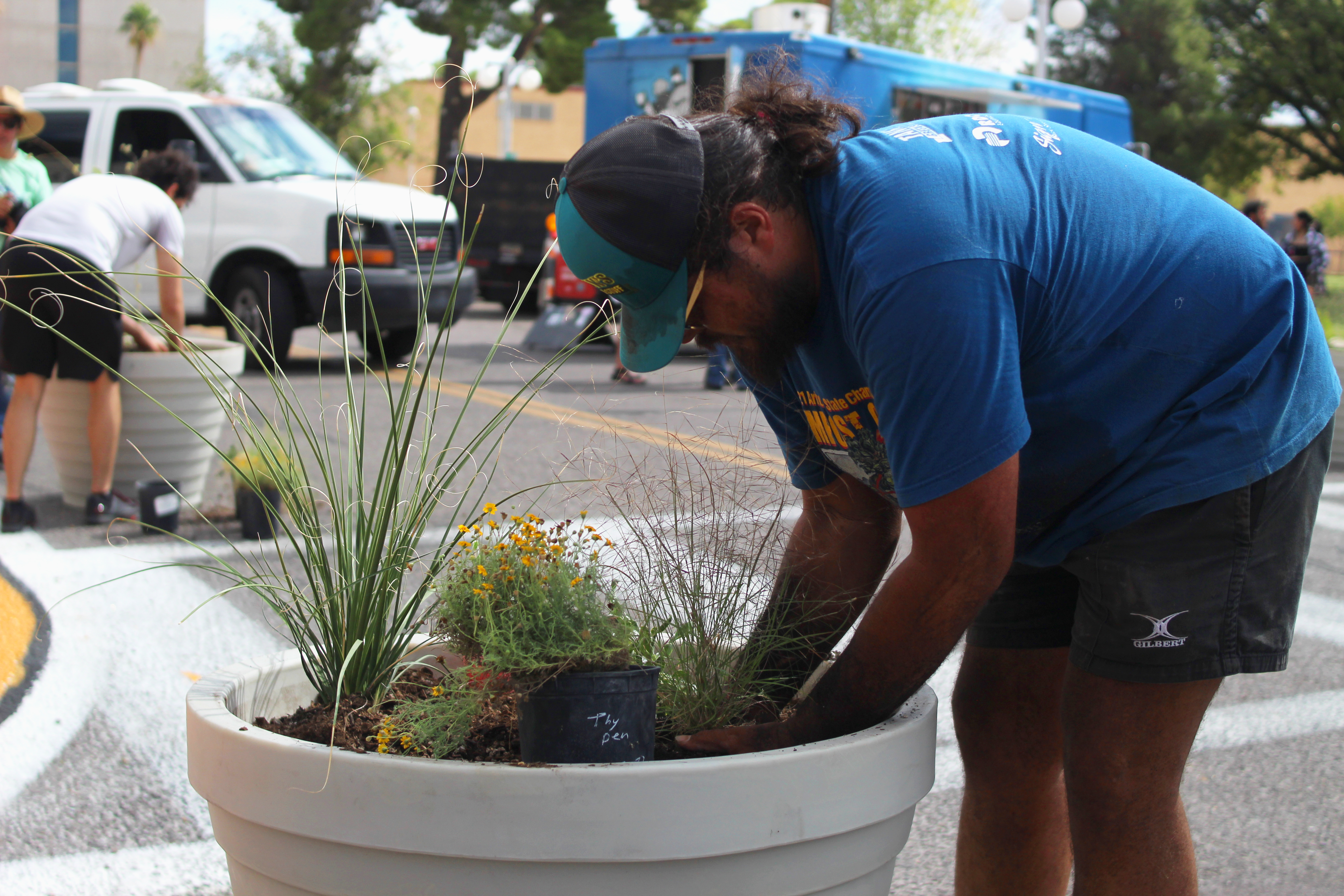 VIEW LARGER Executive director of Tank's Green Stuff Shota Austin is planting new plants into a planter that is going to accompany a new mural in 6th Avenue on Saturday, Oct. 22, 2022 in downtown Tucson. Tank's Green Stuff donated the soil that was used for the event. Flex posts and planters are accompanying the murals in hopes to calm traffic, improve connectivity, and enhance safety and comfort for residents using the street.
Paola Rodriguez/Arizona Public Media

To prepare for the project, a number of steps needed to be taken before the painting could even begin. Changes in the are included:

Throughout the process, Department of Transportation’s Livability Project Manager Gabriela Barillas-Longoria met with residents in the area to see what they wanted.

“We really wanted to incorporate their experiences, how they think of this place and the symbols into the design,” Barillas-Longoria said. “So then we took that to the artist and she synthesized it.” 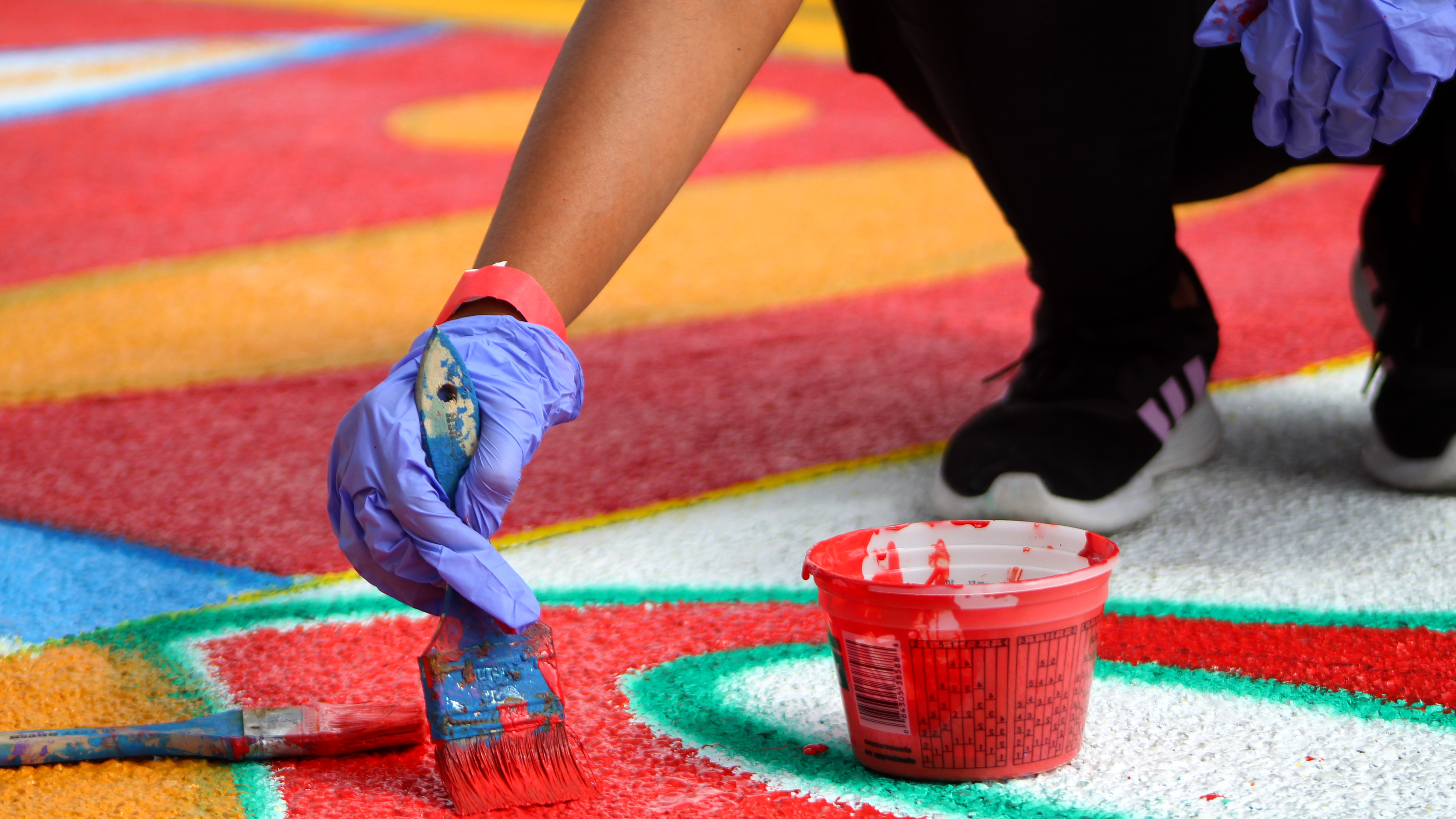 A volunteer is painting a section of a new mural that is being installed onto 6th avenue on Saturday, Oct. 22, 2022 at a high traffic street near Armory Park and the Children's Museum. At around 11:30 a.m., red paint started to run out and organizers were trying to find more.
Paola Rodriguez/Arizona Public Media

Among the residents that Barillas-Longoria talked to was a 97-year-old woman who lived in the area for 60 years. Barillas-Longoria said that the woman made papel picado, a Mexican craft of colorful punched-paper banners, for the annual festival Tucson Meet Yourself. The artist then took the imagery of the paloma, a dove, from one of the pieces of papel picado into the design.

“We wanted the design to be inspired by the different cultures of this area and what is representative of this space,” Barillas-Longoria said.

The community voted on three different street mural designs and color palettes that artist Yu Yu Shiratori sketched. She then incorporated the feedback she received from residents into the design that residents chose. Now, seeing people from all different backgrounds come together for this, she says this would not have been possible without the Tucson community.

“There’s power in numbers,” Shiratori said. “You can’t just exist as an individual. It takes a whole community to realize dreams.” 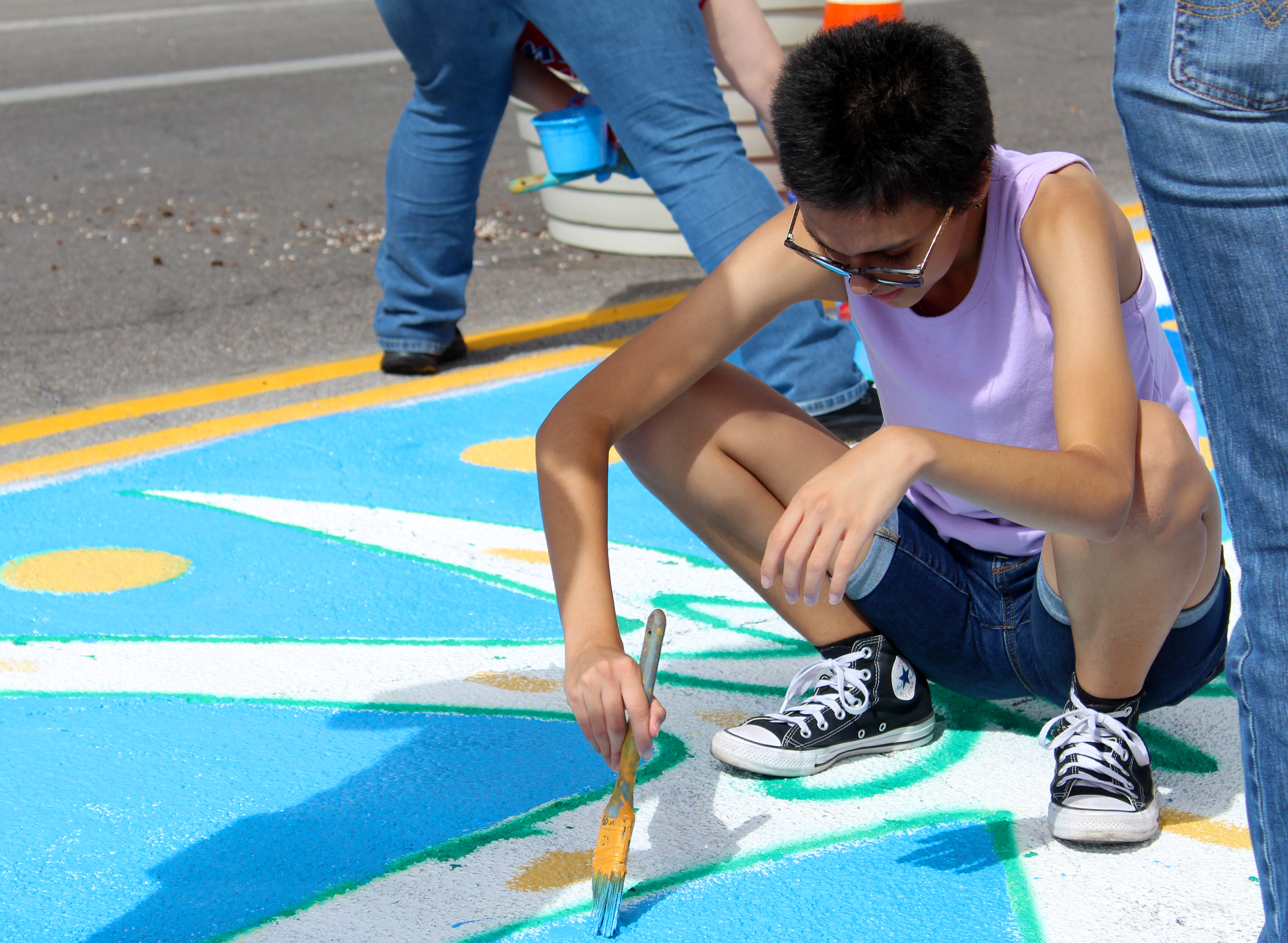 VIEW LARGER A volunteer paints the ground blue as others around are touching up parts of the new mural on Saturday, Oct. 22, 2022 at 6th avenue in between Armory Park and the Children's Museum in downtown Tucson. The goal of the project is to increase pedestrian safety.
Paola Rodriguez/Arizona Public Media

Shiratori best describes Tucson’s passion for art as that of a human body.

“There's a lot of arteries and you can choose to close something off, but then there's a flood of energy going into a different direction,” Shiratori said.

To her, no matter the reason for their attendance, people used that energy to come together to create a safer community through art.

Emily Yetman, the executive director of Living Streets Alliance, believes that the feeling of doing something that is not quite normal also fed into the feeling of that day.

“There's something really powerful about a space that's usually off limits to people, other than when you're driving over it, to be able to come out and reclaim it with paint,” Yetman said. “There's this feeling like you're bringing it to life; it's very empowering.”

For Yetman, one of her favorite parts is the aftermath of what was painted.

“With every single one of these projects, we discover afterwards that some kid got really excited about painting and ended up drifting off and painting like a curve,” Yetman said. “They're just a testament to how free and liberating it feels for folks to be out here doing this.” 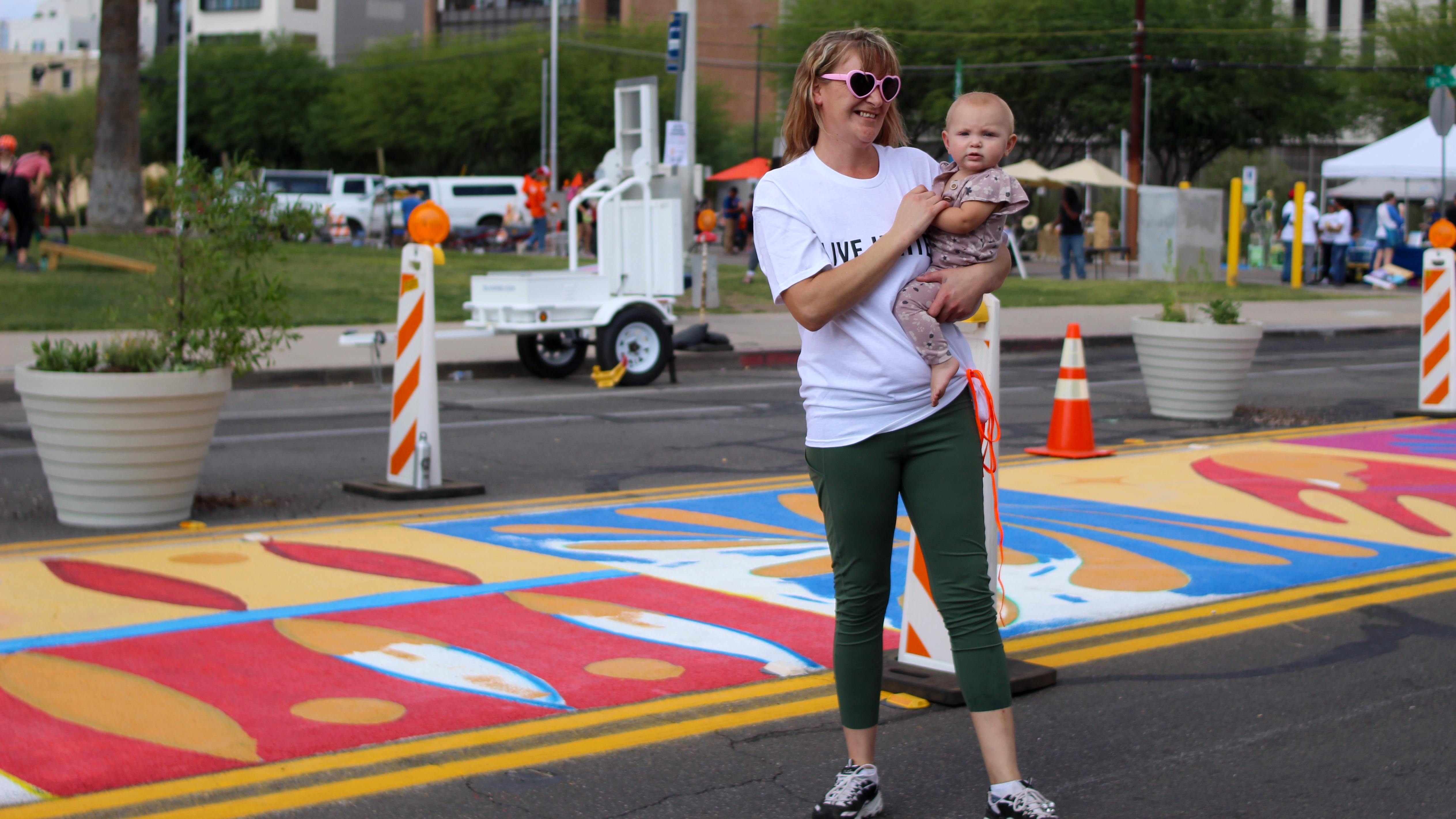 A volunteer is dancing with an infant in celebration of a new mural being painted on 6th avenue on Saturday, Oct. 22, 2022 in downtown Tucson. Music was blaring, food trucks came and yard games were played as community members come together to celebrate the new art.
Paola Rodriguez/Arizona Public Media

8-year-old James Folmsbee was one of the participants who helped in painting 6th avenue. He came with his mom Courtney Folmsbee and little sister Kennedy Folmsbee. At first, he was reluctant to go to the event and described himself as “not much of an explorer.” But, after arriving, Folmsbee only left his spot to get more paint. Although, he does admit that he did make a little bit of a mess.

Tucson’s Department of Transportation will be monitoring the area as a case study. Barillas-Longoria hopes that it will show an increase in pedestrian safety and that maybe this is the beginning of future projects. 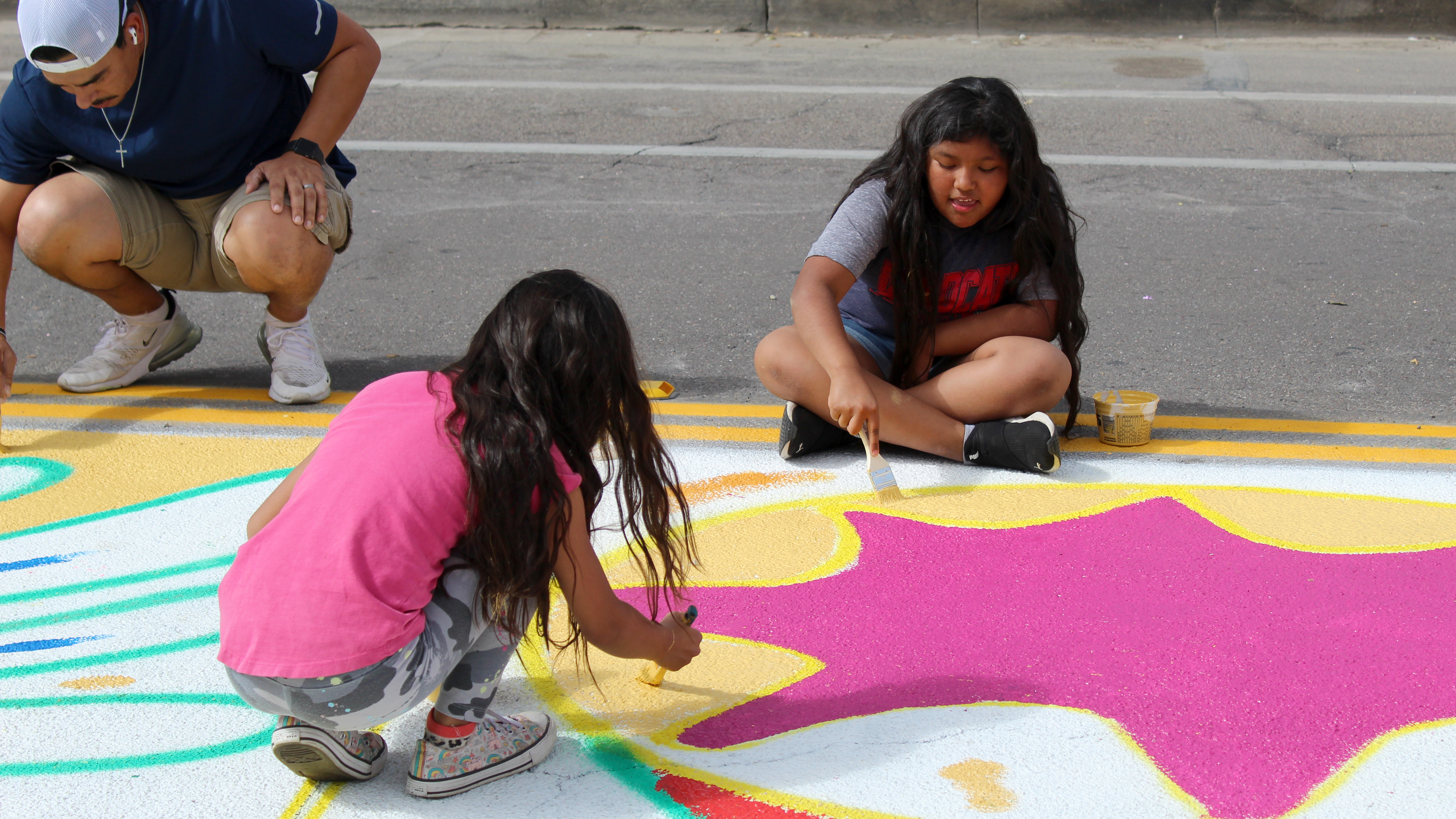 "Painting In, Painting Out": The world as seen by the Sonoran Plein Air Painters. Mainly Murals Walking Tour Día de los Muertos: Ancient Tradition in a Modern Era
By posting comments, you agree to our
AZPM encourages comments, but comments that contain profanity, unrelated information, threats, libel, defamatory statements, obscenities, pornography or that violate the law are not allowed. Comments that promote commercial products or services are not allowed. Comments in violation of this policy will be removed. Continued posting of comments that violate this policy will result in the commenter being banned from the site.