× CORONAVIRUS: The latest coverage and local resources regarding COVID-19 from the Arizona Public Media newsroom.
January 11, 2021

When wildfire burns a high mountain forest, what happens to the snow?

Researchers are trying to understand the impacts to water sources from large fires. by Luke Runyon, KUNC TWEET SHARE 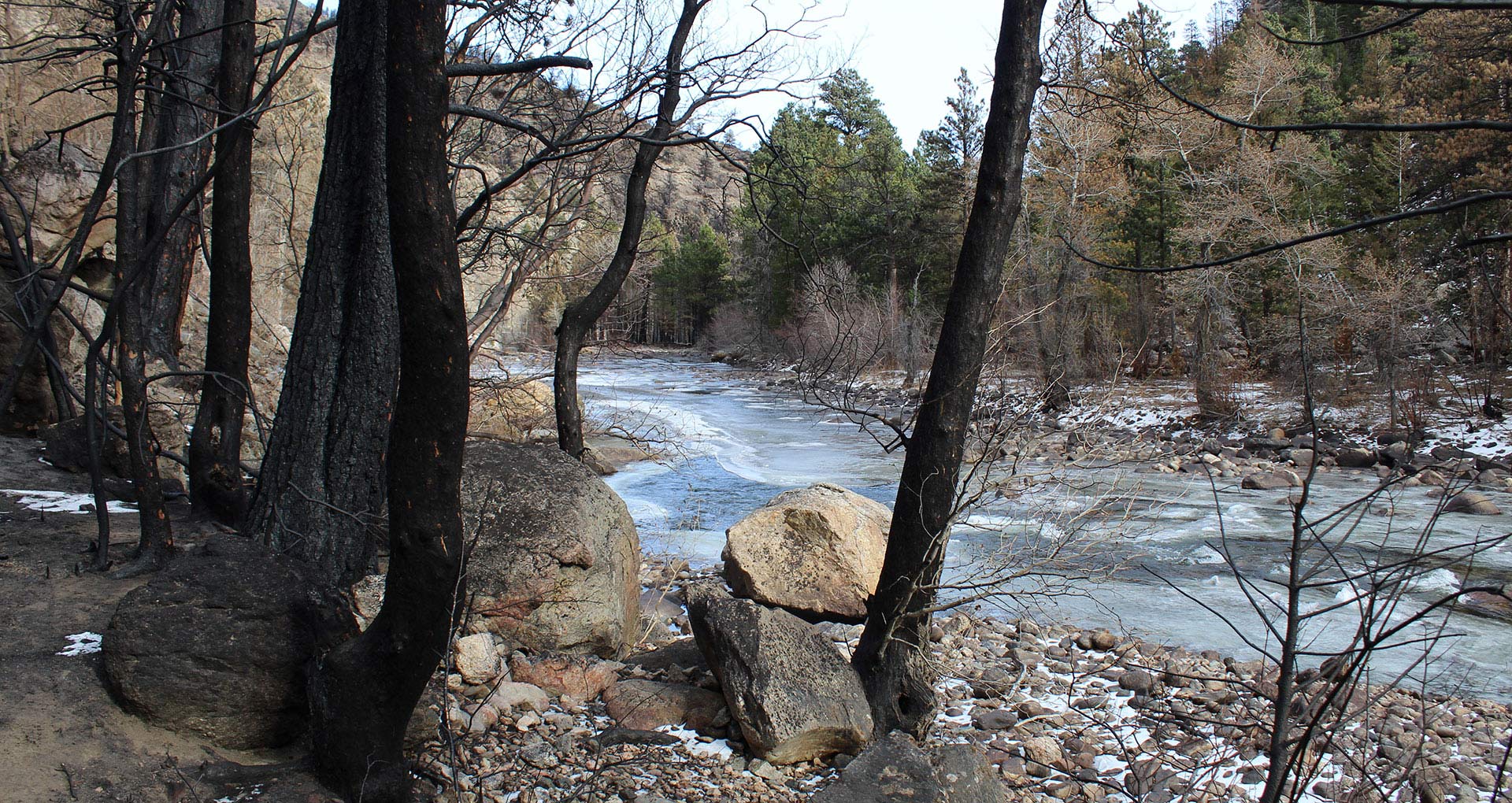 Record-breaking wildfires in 2020 turned huge swaths of Western forests into barren burn scars. Those forests store winter snowpack that millions of people rely on for drinking and irrigation water. But with such large and wide-reaching fires, the science on the short-term and long-term effects to the region’s water supplies isn’t well understood.

To understand, and possibly predict what happens after a river’s headwaters goes up in flames, researchers are descending on newly created burn scars across the West to gather data in the hopes of lessening some of the impacts on drinking water systems.

On a sunny winter morning, a team of researchers led by Colorado State University hydrologist Stephanie Kampf roamed through the steep drainage of Tunnel Creek, a tributary to the Poudre River. Much of the creek burned this summer and fall during the Cameron Peak Fire west of Fort Collins, Colorado.

Exploring a burn scar is like running an obstacle course. There are downed trees to climb over, duck under, and get tripped by. There are the trees that are entirely burned out, leaving gaping holes in the ground. Rubbing up against any charred bit of debris leaves clothes smeared with black smudges, like the forest is trying to turn each person who enters into a living charcoal sketch.

High up in the creek’s drainage, near a frozen waterfall, Kampf paused ankle-deep in a burned out tree well.

Even the tree’s roots are gone.

For more than an hour and a half, Kampf’s team searched for a flat spot to construct a temporary weather station. The university received a National Science Foundation grant to put instruments into the field quickly, before snows began to accumulate in the burned area. At more than 208,000 acres, the burn scar is the state’s largest on record.

Two other nearby fires broke size records in 2020 as well. In late October the East Troublesome Fire exploded near the headwaters of the Colorado River, burning 193,812 acres, killing two people and causing thousands to flee their homes. To the north, the Mullen Fire on the Colorado-Wyoming border topped out at 176,878 acres. Downstream on the Colorado River, the Grizzly Creek Fire torched 32,631 acres in and around Glenwood Canyon. And in the Book Cliffs north of Grand Junction, Colorado, the Pine Gulch Fire burned nearly 140,000 acres.

In the case of Cameron Peak, which acts as the headwaters for the Poudre River, Kampf and her colleagues want to know: what happens to the snow that falls on a burned area this high in elevation and this big?

“Some of these streams have burned so much, like the whole riparian zone is burned. And so there's nothing alive at all,” Kampf said. 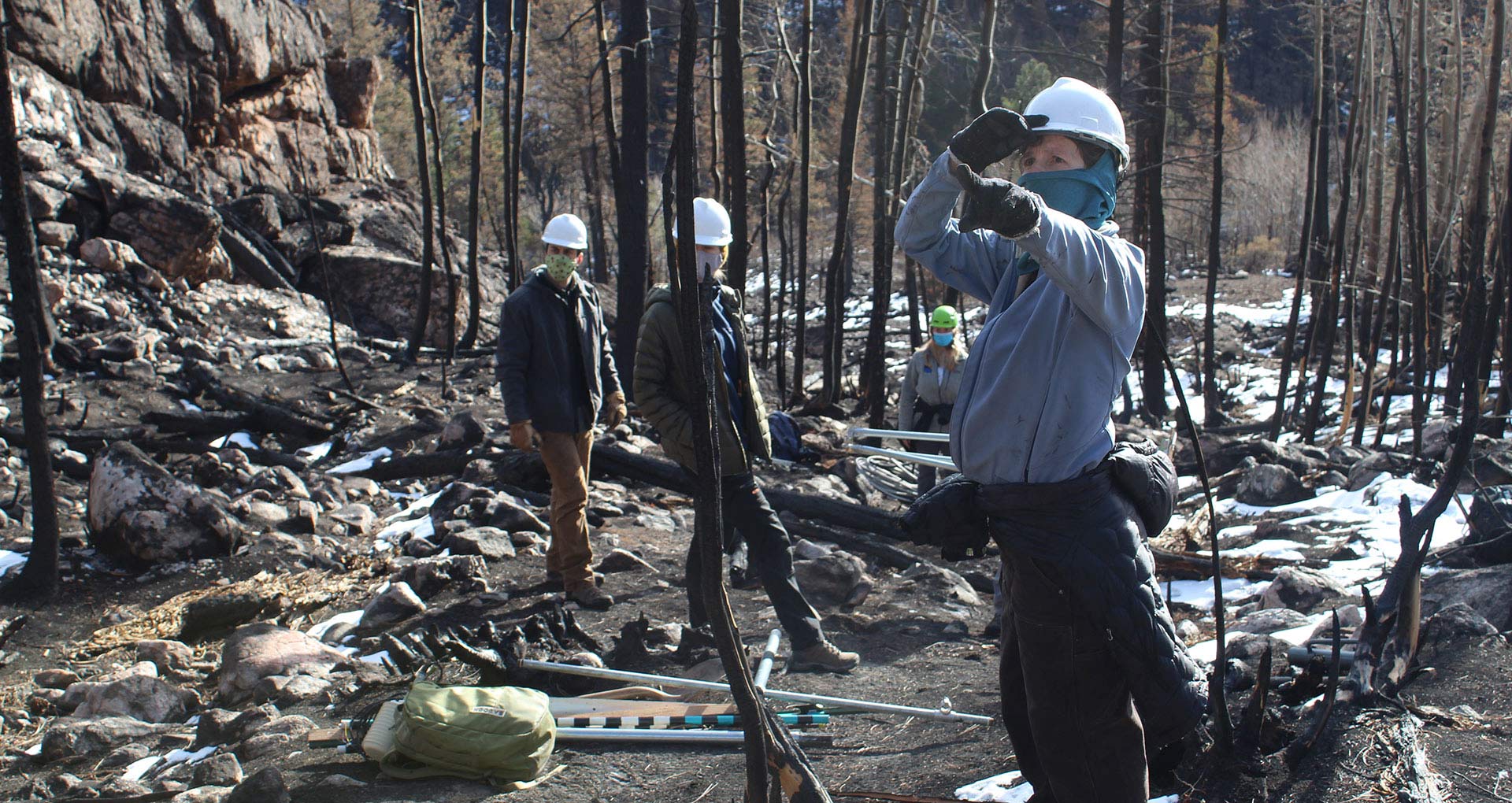 Snow in the Western U.S. equals water. The annual winter accumulation fills reservoirs, provides habitat for fish, birds and other wildlife, and eventually flows to bathroom faucets and irrigation canals from Denver to Tijuana, Mexico.

Existing research shows fires can affect snowpack in different ways. With fewer trees, and without their full, bushy branches, more snow tends to accumulate on the ground. Snow that’s caught in trees often blows off or turns immediately to vapor. So when a wildfire moves through a forest, scientists say to expect more snow to pile up on the ground.

But the lack of tree cover also causes that accumulated snow to behave differently. Without a shaded canopy above it, the snow is more exposed to the sun, and in the spring, melting can become erratic. Mid-winter melting can occur, which means a lessened runoff come spring.

These general findings can change, depending on the type of forest that burned, the direction the burned slope is facing, and the severity of the burn in that area.

“We're kind of in a brave new world when it comes to snow and wildfire,” said Anne Nolin, a geography professor at the University of Nevada-Reno.

Another side effect of fire, she said, is how it can change the composition of snow when it falls on the ground. It becomes darker, picking up charred bits of ash.

Studies of dust on snow have shown its dramatic effect on the timing of snowmelt. The same is true of snow that’s been mixed with charred debris and smoke particles, Nolin said. “All that black guck on the snow makes it melt a lot faster,” she said.

A mis-matched timing of snowmelt makes the job of reservoir management much harder, Nolin said. Many water providers use long-term models to gauge when to release and store water. A burned drainage area makes those historical data less reliable.

Fires are an important part of forest ecology in the Western U.S. But Nolin said the fires in 2020 were unprecedented in their size and severity. Fires just over the border in California from her home in Reno choked the air, burned homes and disrupted everyday life during an already stressful time.

“The scale that we're experiencing now, we actually don't know what the hydrologic impacts will be,” she said. 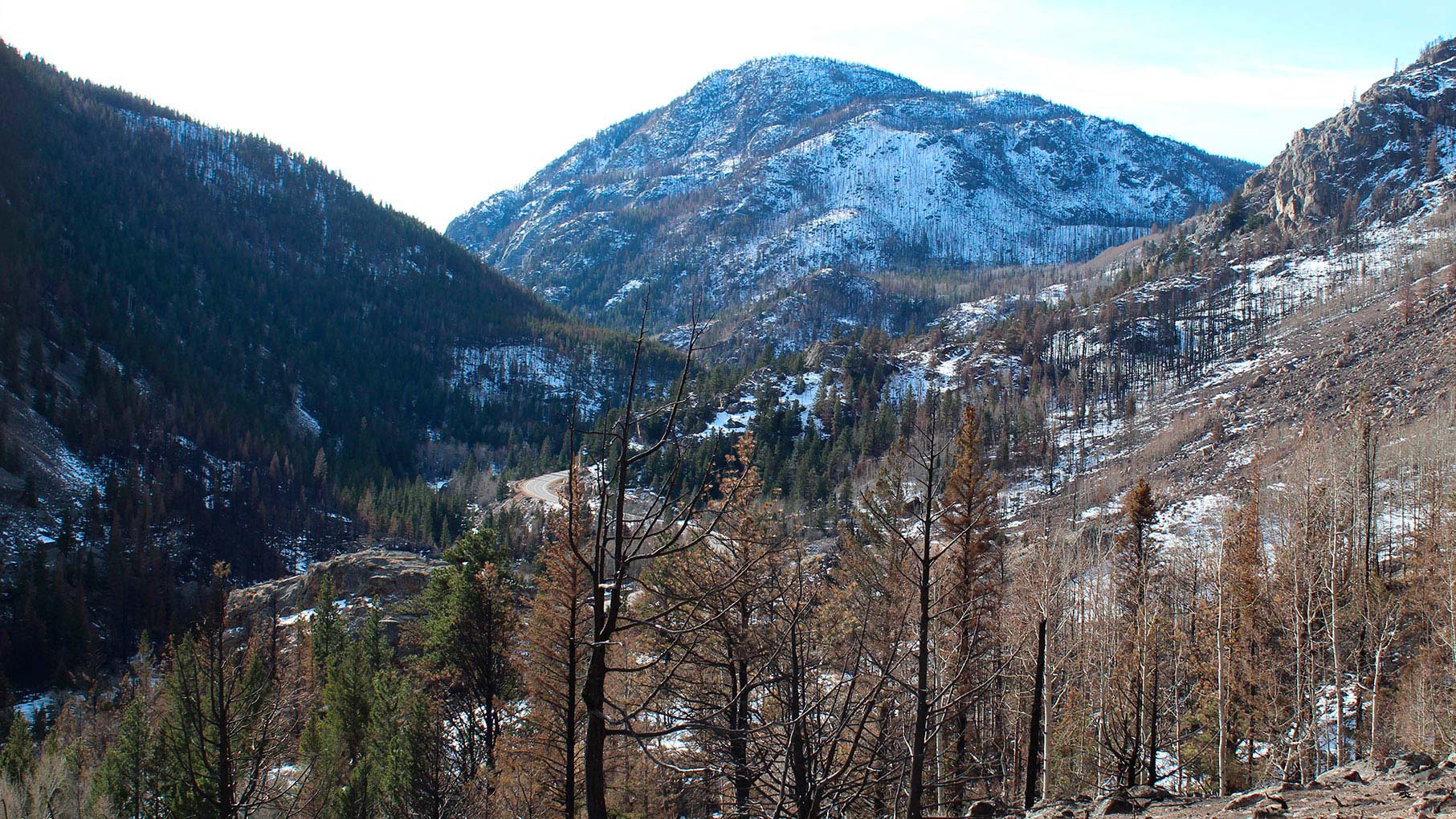 The Cameron Peak Fire burned through the headwaters for northern Colorado's Poudre River and many of its small tributaries.
Luke Runyon/KUNC

“The more people look at this, the more they realize, ‘Oh, there's not an easy, straightforward answer,’” said Gabrielle Boisrame, a researcher at the Desert Research Institute, based in Las Vegas.

“If there's a place that you haven't already studied, you can’t say, ‘Aha, a fire has burned right here. I can tell you exactly what's going to happen to the snowpack and the stream flow.’ There's a lot of really complicated interactions happening,” Boisrame said.

With water supply margins already tight in many portions of the West, Boisrame said, water providers, agriculturalists and environmental groups are realizing, “that we actually need to know” the detailed effects of how each individual burn scar will affect the water cycle.

That’s because no two fires are alike. Depending on weather and fuel loads, each fire burns a landscape with varying severity. And that severity matters, not just for forest recovery, but also for water quality immediately following it, said Ben Livneh, a University of Colorado-Boulder engineering professor.

In fires with lots of high severity burn, much of the vegetation is completely combusted. Dissolved organic carbon can be one of the biggest headaches for water treatment facilities following a fire. Treating it can also result in byproducts found to be carcinogenic, Livneh said. But if there’s not much organic material left in a burned area — because it all burned — it doesn’t cause as many problems.

“And so maybe somewhat counterintuitively, the most severe fires aren't necessarily the most damaging, at least from a water treatment and water quality perspective,” Livneh said.

Research has shown too that forest management can play a big role in lessening the impacts of fire on water systems. The Desert Research Institute’s Boisrame looked closely at one creek in Yosemite National Park. In that watershed, land managers have been more hands-off with fire suppression, and allowed smaller fires to burn more frequently.

“They had fires that created this patchwork, where you opened up the forest more, and that led to getting more snow in those open areas, both in terms of the peak amount of snow accumulated and how long that snow stayed on the ground,” Boisrame said.

Small, prescribed burns that mimic more natural forest fires might be a way forward, she said.

“Do those kinds of fires lead to less sedimentation and less problems with flooding and water quality? It looks like they do,” she said.

One hurdle in understanding the relationship of burn scars and snowpack is that it’s a challenge to get good data from such dynamic environments. Landslides and floods after a fire can destroy scientific instruments.

That was top of mind for Colorado State University’s Kampf as she traversed the Cameron Peak burn scar. Finding a site for a weather station is like looking for a proper campsite. Researchers want something flat, on stable ground and free from large hazards like falling rocks and trees. That’s often hard to find in a recently burned forest.

The weather station along Tunnel Creek will be compared to another site untouched by fire. Other stations will look at impacts at higher and lower elevations. They’re likely to collect data on soil moisture, solar radiation and precipitation for the next three to four years, Kampf said, though long-term funding hasn’t yet been secured.

It can be easy to think of wildfires as singular, acute events, that displace people from their homes and fill the air with smoke until they are put out, Kampf said. But when it comes to snowpack, and water supplies, the effects can last for decades. Much of the West’s water supply starts in relatively small mountain areas.

Pima County readies COVID-19 vaccine expansion Colorado River watershed forecast looks very dry for start of 2021 National Weather Service: Dryness defined 2020 in Southwest
By posting comments, you agree to our
AZPM encourages comments, but comments that contain profanity, unrelated information, threats, libel, defamatory statements, obscenities, pornography or that violate the law are not allowed. Comments that promote commercial products or services are not allowed. Comments in violation of this policy will be removed. Continued posting of comments that violate this policy will result in the commenter being banned from the site.