The top theory about our moon's origin was developed in Tucson

Tucson scientists published in 1975 the key theory about the moon's creation. by Tony Perkins Tweet 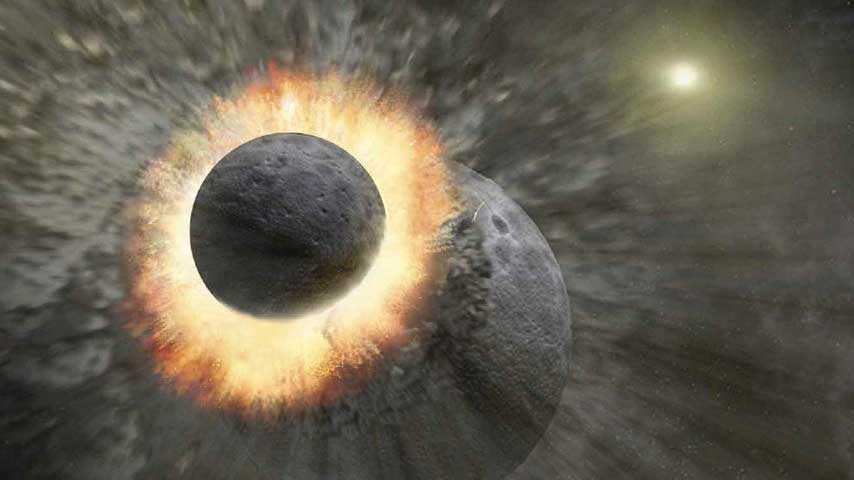 VIEW LARGER Illustration depicting collision between Earth and another object during formative era of the solar system.
NASA/JPL-CALTECH/T. PYLE

The modern theory about the creation of the moon was developed in Tucson 45 years ago.

The Planetary Science Institute's Bill Hartmann and Don Davis theorized that a giant object struck the Earth as the planet was forming 4.5 billion years ago. Hartmann says the collision caused a massive amount of debris to break away and evolve into Earth's companion in space.

“You could blow off a lot of material from the outer layers of the Earth, which would be this igneous rock material," he said. "And some of that would go into orbit and you would just accumulate the moon out of that material.”

Hartmann is currently senior scientist emeritus at the institute. Prior to developing their lunar creation theory in 1975, Hartmann worked on a robotic mission to Mars and Davis had become known for helping NASA bring the disaster-stricken Apollo 13 mission home.

Episode 214: The origin of our moon UA's special connection with the second moon landing Commemorating 50 years since the Apollo 11 Moon Landing
By posting comments, you agree to our
AZPM encourages comments, but comments that contain profanity, unrelated information, threats, libel, defamatory statements, obscenities, pornography or that violate the law are not allowed. Comments that promote commercial products or services are not allowed. Comments in violation of this policy will be removed. Continued posting of comments that violate this policy will result in the commenter being banned from the site.