While many effects were short-lived, it had a lasting impact on the imaginations of those connected to the river delta. by Luke Runyon, KUNC Tweet 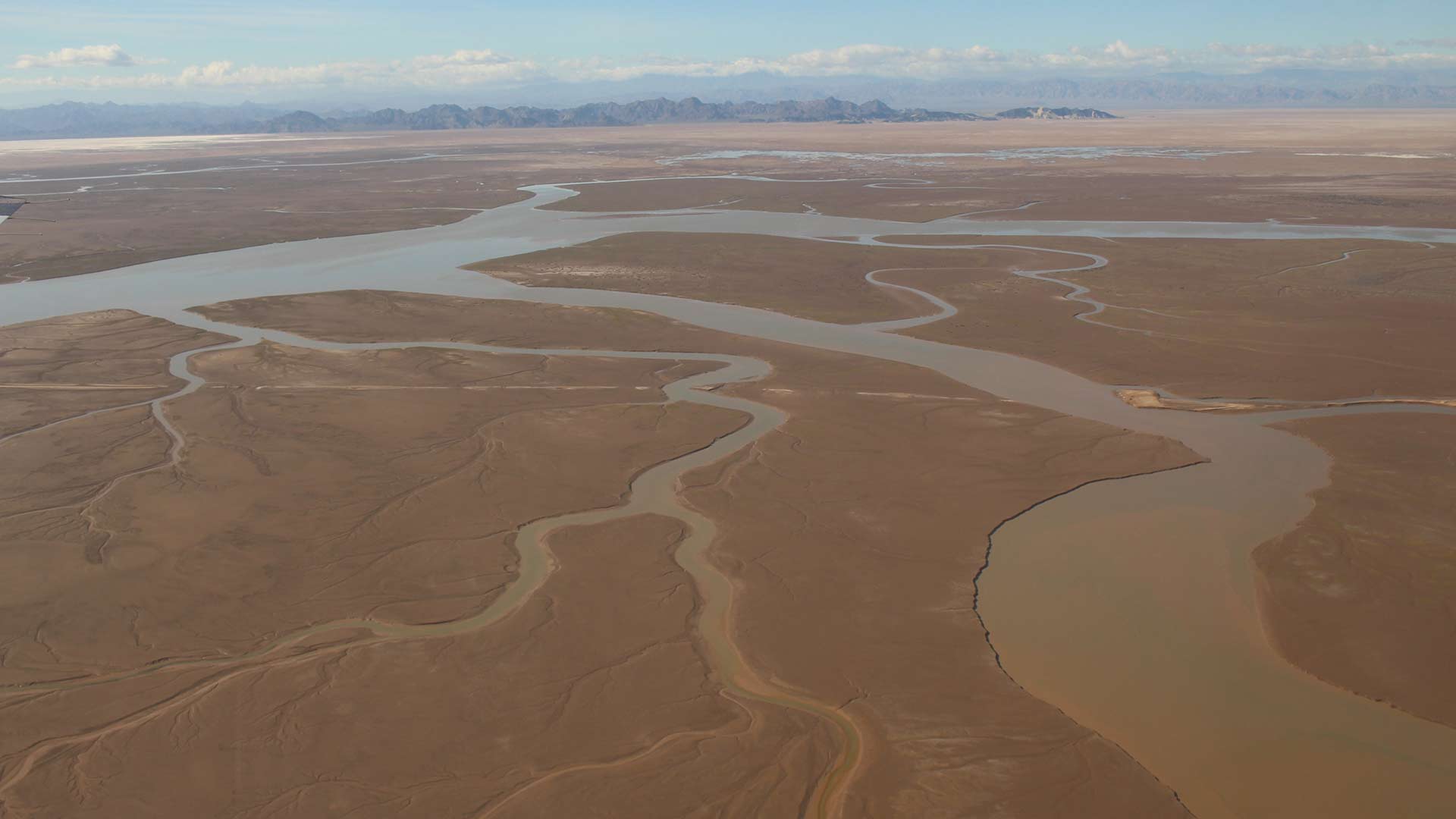 The Colorado River's inability to reach the Pacific Ocean has become one of its defining characteristics, emblematic of the Southwest's reliance on the overallocated river system.
Luke Runyon/KUNC

SAN LUIS RIO COLORADO, MEXICO — From inside a small airplane, tracing the Colorado River along the Arizona-California border, it’s easy to see how it happened.

As the river bends and weaves through the American Southwest, its contents are slowly drained. Concrete canals send water to millions of people in Phoenix and Tucson, Los Angeles and San Diego. Farms, ribbons of green contrasted against the desert’s shades of brown, line the waterway.

Further downstream, near Yuma, Arizona, the river splits into threads, like a frayed piece of yarn.

A massive multistate plumbing system sends its water to irrigate the hundreds of thousands of farm acres in southern California and Arizona, hubs for winter vegetables, alfalfa, cotton and cattle.

When it hits the final dam, located on the U.S.-Mexico border, every drop has been claimed and put to use. In a typical year, what’s left of the river’s flow — promised to Mexico in a 75-year-old treaty — is sent to farm fields in the Mexicali Valley, and then on to the Mexican cities of Tijuana, Mexicali and Tecate. 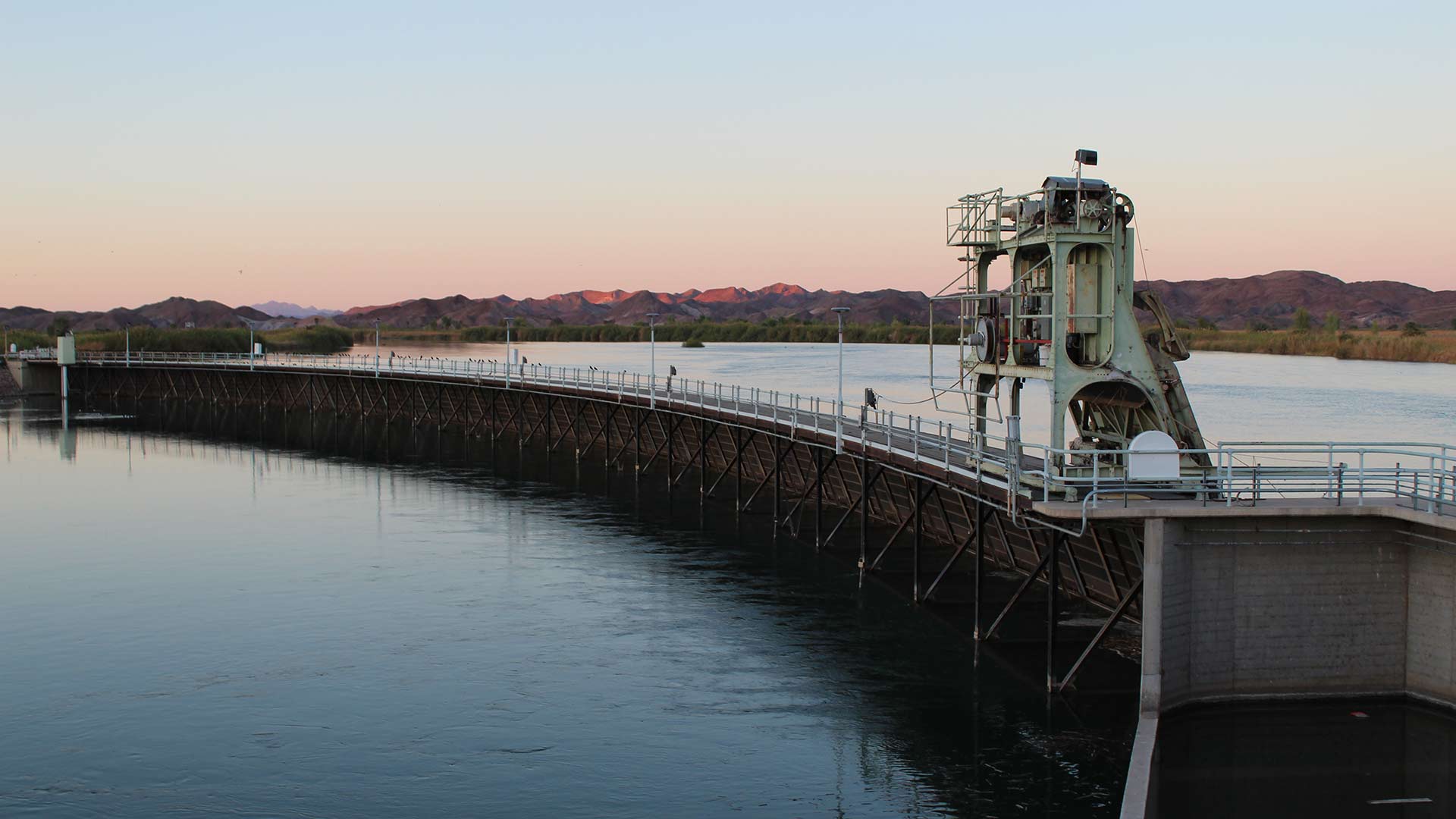 All this reliance on an overallocated river has left its final 100 miles as the ultimate collateral damage. Since the early 1960s, when Glen Canyon Dam impounded the river near Page, Arizona, it has rarely reached the Pacific Ocean. The thread is frayed beyond recognition, leaving no water for the river itself.

“About 90 percent of the water is retained on the U.S. side and it’s used and diverted,” said Karl Flessa, a researcher at the University of Arizona. He studies the Colorado River Delta.

“In effect, one of the things we’ve done historically — not meaning to especially — what we’ve done is export some of the environmental consequences of water diversions,” Flessa said. “We’ve exported them to Mexico.”

The Colorado River’s inability to complete its journey from the Rocky Mountains to the Sea of Cortez has become one of its defining characteristics. Its historic delta, a haven for birds and mammals in the Sonoran desert, is a husk of its former self.

From the air, in a flight arranged by nonprofit group LightHawk, the Colorado River Delta transitions from a jigsaw of farms to a staggering sprawl of muddy salt flats. (LightHawk receives funding from the Walton Family Foundation, which also funds KUNC’s Colorado River coverage.) The river’s historic channel in most parts through Mexico is nothing more than a sandy bed, scattered with saltcedar.

Where the river used to meet the ocean, tidal pools and drainages carve the sand and soil into organic patterns, like the cross-section of a lung.

Within the last twelve years, both the U.S. and Mexico have acknowledged the delta’s problems, signing agreements to commit both water and funding to restoring it to some semblance of its former self.

The splashiest of those efforts took place five years ago this spring, and left a lasting imprint on those who witnessed it.

Around 8 o’clock on a Sunday morning in March 2014, water began spilling through Morelos Dam on the U.S.-Mexico border. The release was a culmination of years of negotiation between the U.S., Mexico and environmental organizations.

It was known as the pulse flow — flujo pulso in Spanish.

“You think of it as this wall of water that’s going to come down, but really it was this creeping tongue of water across the sand,” said Jennifer Pitt, who worked for the Environmental Defense Fund at the time, and now directs the Colorado River program for the National Audubon Society. Both groups receive Walton Family Foundation funding. Pitt was a key negotiator to make the pulse flow possible.

She spoke while standing in the sandy riverbed below a bridge that leads into the border city of San Luis Rio Colorado. The bridge is at a nexus. The riverbed forms the border of the Mexican states of Sonora and Baja California. Metal barriers form the border between the U.S. and Mexico here, too. 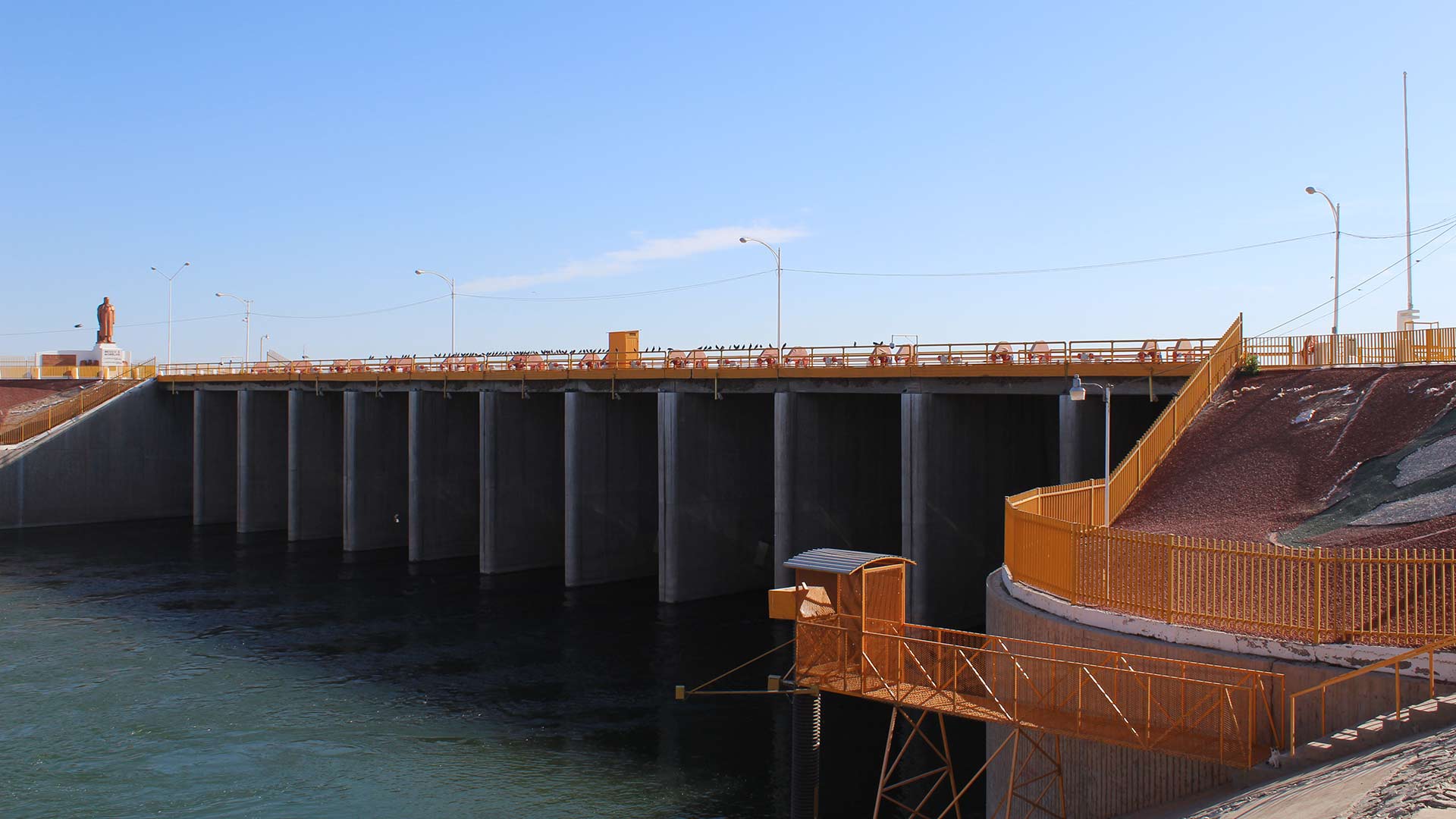 VIEW LARGER In spring of 2014, Morelos Dam at the U.S.-Mexico border released water through the Colorado River’s main channel as part of the pulse flow.
Luke Runyon/KUNC

It took a few days after the dam opened for the water to arrive at the bridge, where Pitt and her colleagues gathered to wait. About 70 people in garden chairs sat in anticipation. A community clean-up a few days prior left the riverbed scrubbed of trash and debris.

For many young people, it was the first time they had ever seen water flowing in this stretch of the Colorado River. For older residents, it had been decades since they saw this much water here. “They started getting up just one by one, people coming over to the water and getting down on their hands and knees and just touching it,” she said. “It was like the arrival. The great arrival of the river.”

For many young people, it was the first time they had ever seen water flowing in this stretch of the Colorado River. For older residents, it had been decades since they saw this much water here.

“I’ve spent 20 years thinking about how we can restore the Colorado River from where it dries out to where it reaches the sea,” Pitt said, “And in all of that thinking have never imagined that this site could bring so many people in as a magnet for people to enjoy something.”

Within weeks the flow was soaked up by depleted soils, though it did eventually reach the Pacific Ocean. From where Pitt and I are standing at the bridge in early December 2018, you’d never know the West’s mightiest river was supposed to flow here. 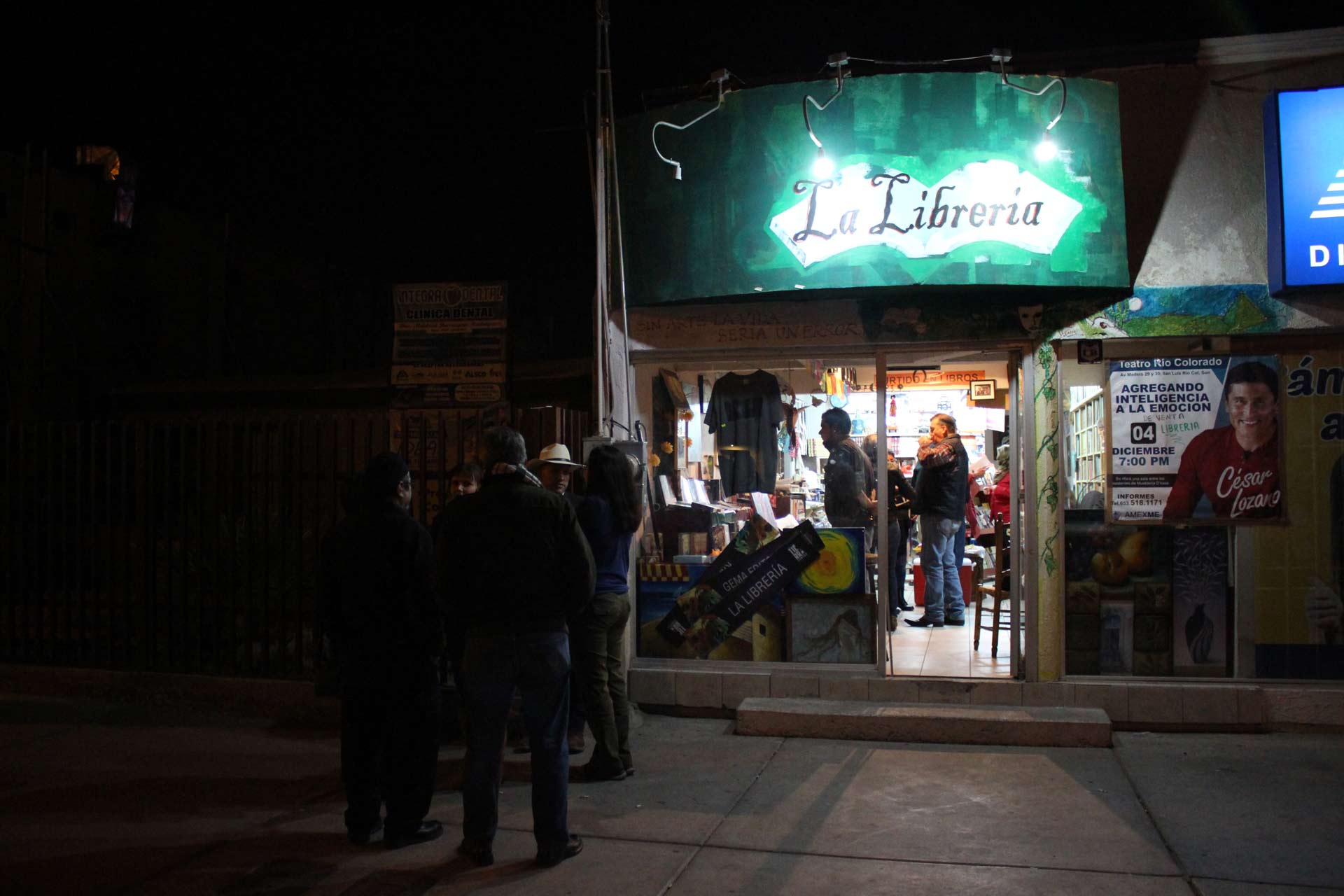 The pulse flow was about 105,000 acre-feet of water, enough to turn the channel again into a river for a few weeks. One acre-foot generally provides enough water for two average American households for a year. Historically, more than 12 million acre-feet flowed into the delta each year.

The agreement that allowed for the pulse flow — called Minute 319 — also provided for about 57,000 acre-feet of water to be delivered to specific restoration sites after the pulse flow.

Combined, that amount of water led to a green up along the river corridor, and sustained more than 275,000 new trees, according to a December 2018 report from the International Boundary and Water Commission.

The pulse flow’s biggest effects were short-lived. Both the green up and increases in certain species dropped again after the water stopped flowing.

A study from U.S. Geological Survey scientists confirmed that. It found that the amount of water in the pulse flow was too small to change the channel in a significant way, or scrub the riverbed, which would’ve happened during a more natural spring flood when flows would be much higher.

Because of the delta’s low water table, a lot of water seeped into the ground before it could do any good on the surface to help establish new wildlife habitat in expanded restoration areas. It was an experiment, said University of Arizona researcher Karl Flessa. Scientists experiment all the time, chart the results and move on.

Does he think the delta will ever see another pulse flow on the scale and magnitude of the one seen in 2014?

“Probably not,” he said. “Because you can get the water to do more restoration work by delivering it in smaller doses as it were, and delivering it to the right places where the vegetation can really take advantage of it.

“I think restoration, like any other activity with water, we’re really obliged as a society to be as water efficient as possible.”

'A part of you has come back'

Those who live nearby could see water in the channel and that lingered in their memory, even after the flow was finished. Soon after, conservation groups started harnessing that imagination to get communities to buy into the idea that the delta can be partially restored.

Crisoforo Arcos experienced the flow from his small community of Miguel Aleman, which sits along the Colorado River’s main channel near San Luis Rio Colorado. He’s in work clothes, with a silver mustache when he chats at a river restoration site where he works. At 63 years old, he remembers fishing in the river as a boy in the early 1960s.

Until the pulse flow brought the river back, Arcos could only tell stories of what it used to look like.

“There was the time here everyone in the community, the people of San Luis Rio Colorado, came to the river to enjoy themselves,” Arcos said through a translator. “But it was a very low level of water, very very little. This was years ago, and since then we haven’t seen any water.”

The pulse flow also inspired art. That was on display one night in late 2018 at La Libreria, a bookstore in downtown San Luis. One by one, writers stood at the front of the room and read their work. Much of it focused on the writer’s relationship to the river. 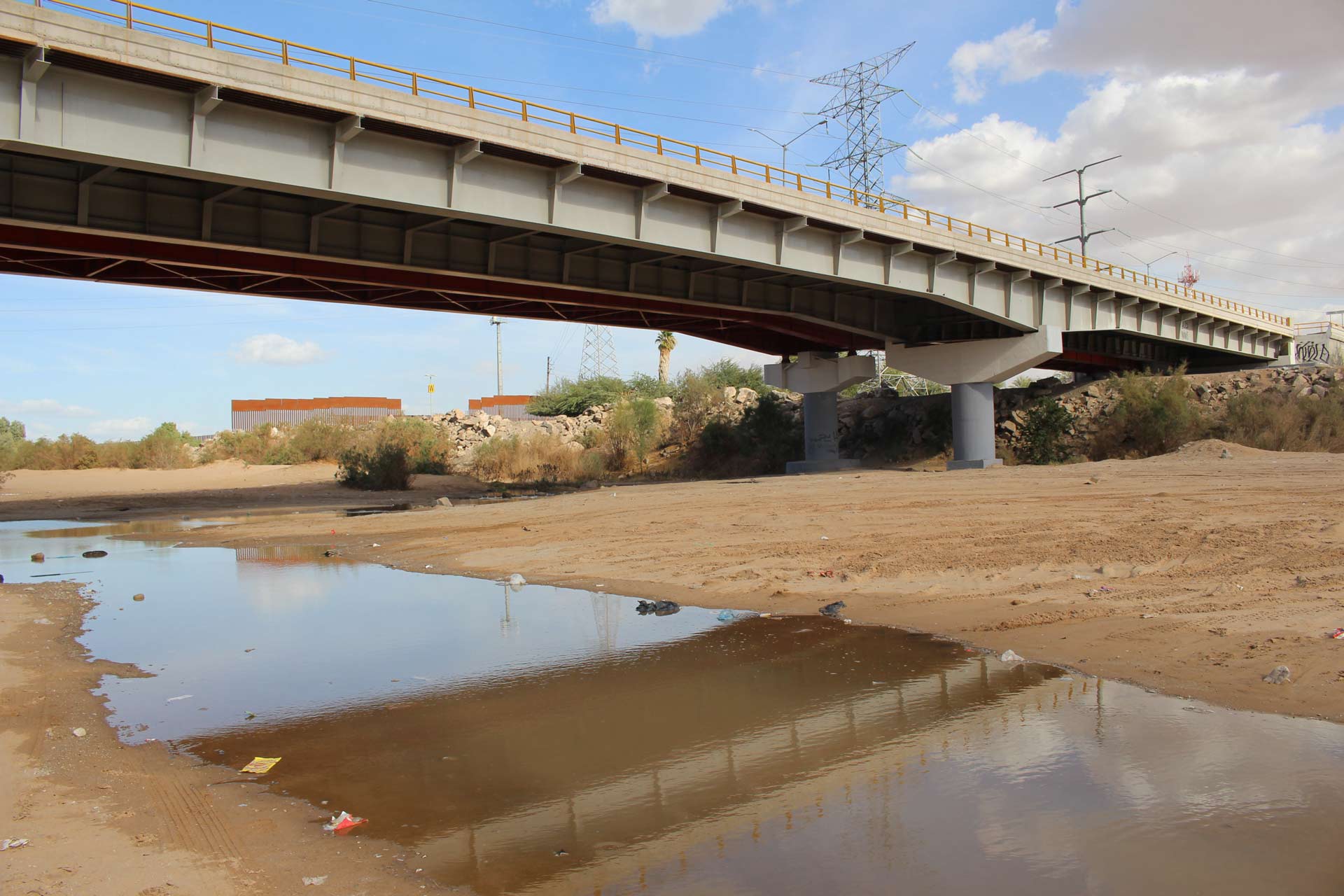 VIEW LARGER The bridge at San Luis Rio Colorado played host to a spontaneous party in spring 2014 when the Colorado River again flowed here during the pulse flow.
Luke Runyon/KUNC

After the event, local architect Nancy Saldana stood outside on the sidewalk. She was born in San Luis, and considers herself a community activist. In the yellow glow of the street lights, she recalled the pulse flow.

“The day it arrived was something like you feel that a part of you has come back,” she said through a translator. “I think it’s like when you lose something, in your gut, something inside you. That for us is the water.”

Those eight weeks of water were a spectacle in her hometown, Saldana said. There are ongoing talks and a master plan in place for the city to create a riverfront park. But the city is still working on finding enough water to run through the channel on a regular basis. As more time passes, there’s a chance that those who witnessed the pulse flow will begin to forget how they felt.

“I don’t believe that if there hadn’t been the pulse flow, I don’t think we would have felt as much hope.”

Hope, she said, in the radical idea that rivers can — and should — have water.

The Desert Blooms in a Bountiful Monsoon. Award recognizes Tucson Water's sustainability Federal judge says Customs and Border Protection broke environmental law
By posting comments, you agree to our
AZPM encourages comments, but comments that contain profanity, unrelated information, threats, libel, defamatory statements, obscenities, pornography or that violate the law are not allowed. Comments that promote commercial products or services are not allowed. Comments in violation of this policy will be removed. Continued posting of comments that violate this policy will result in the commenter being banned from the site.