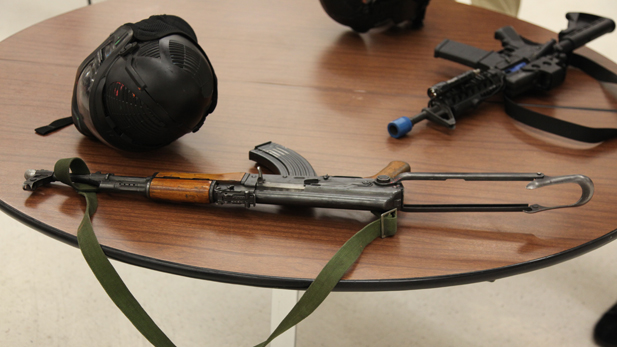 The question of municipal sovereignty was at the core of yet another legal dispute between the city of Tucson and state government before the Arizona Supreme Court Tuesday.

The case, Tucson's second sovereignty clash with the state in recent years, involves a conflict between a city ordinance that requires destruction of seized and turned-in guns and a state law that requires they be sold off to the public.

At stake in the current case is $150 million or more in state tax revenue payments to the city. Under the state law, the penalty for a municipality not complying with the law is withholding of the money.

The city's argument before the court was that Tucson is a charter city and that means its decision to destroy the weapons supersedes the state law requiring their sale. The charter is akin to a constitution.

“It think that is within the City Charter authority," lawyer Richard Rollman argued on the city's behalf.

Justice Clint Bolick said that line of reasoning was questionable.

“Where do you find that in the language of the (state) Constitution?" Bolick asked Rollman. "All that I see in the Constitution is that city ordinances are subject to state law, and that a charter repeals conflicting charter provisions. I see absolutely nothing that state law is ever subordinate."

"I believe that the language in the constitutional provision that you are referring to, that the charter shall be consistent with state law, is language that was intended to refer to the adoption of the charter," Rollman responded.

“The ability to obtain property through those means is a law enforcement authority related to the police power," Watkins said. "Therefore the state can validly regulate this power and has chosen to do so here and requiring they be sold."

Chief Justice Scott Bales questioned whether the law deals with property turned over to a city.

"No, because I don’t believe that is what has happened here under the statute because restrictions still exist on how this property can be used," Watkins responded.

City officials have said their rationale for destroying guns is that it takes them out of circulation and makes the city safer.

State officials have argued that the city can benefit from the revenue it would get in selling guns and that it keeps them in circulation so people can defend themselves.

City officials have not indicated what they will do if the court rules against them.

It is the second such sovereignty fight between the city and the state. The city won the last court decision, in which it was allowed to keep municipal elections in odd-numbered years after the Legislature passed a law requiring they be moved to even-numbered years with state and national elections.

AZ Supreme Court Strikes Down Part of Child Protection Law Arizona Supreme Court: Tucson Can't Destroy Seized Guns Want to See State Courts in Action? Appeals Coming to UA
By posting comments, you agree to our
AZPM encourages comments, but comments that contain profanity, unrelated information, threats, libel, defamatory statements, obscenities, pornography or that violate the law are not allowed. Comments that promote commercial products or services are not allowed. Comments in violation of this policy will be removed. Continued posting of comments that violate this policy will result in the commenter being banned from the site.