× CORONAVIRUS: The latest coverage and local resources regarding COVID-19 from the Arizona Public Media newsroom.
January 15, 2020

While weather events like floods lead can lead to relief money, no extreme heat events have been declared a federal disaster. by Kailey Broussard, Cronkite News TWEET SHARE 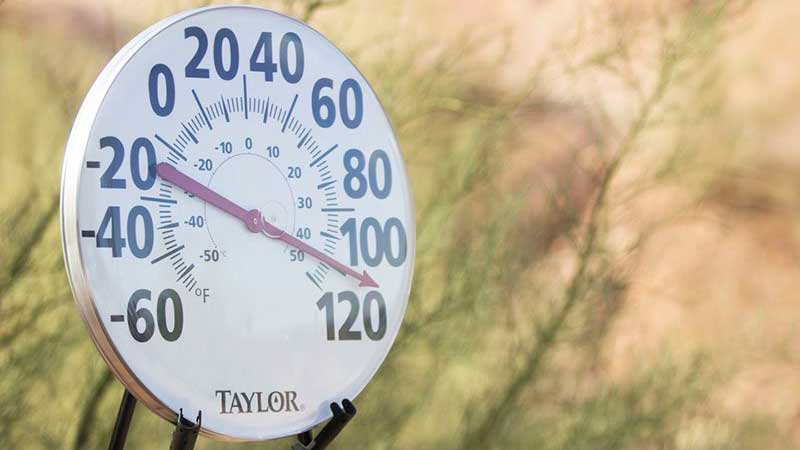 VIEW LARGER Maricopa County averages 110 days above 100 degrees Fahrenheit a year, and it recorded 119 heat-caused deaths in 2018, according to the Maricopa County Department of Public Health.
Greg Macelroy/Cronkite News

The Centers for Disease Control and Prevention says that around 618 people in the U.S. die each year from exposure to extreme heat, and the numbers have been rising steadily.

While cities hit by floods or substantially damaged by other weather events get money to recover and mitigate future storms, however, no extreme heat events have been declared a federal disaster. Only one federally declared disaster under modern FEMA operations lists heat as one of the factors in its title, according to an analysis of more than 60 years of federal data.

Responding to extreme heat has become largely a local responsibility, with vulnerable populations relying on scattered services offered across various levels of government and across non-governmental organizations.

“One of the barriers is that people think there are already programs in place, but there really aren’t as many as you would think,” said Sandy Bahr, president of the Sierra Club’s Grand Canyon chapter. She said the programs that are available “are not accessible, and a lot of people just don’t ask.”

Victims of extreme heat are not the only ones confused: Part of the problem with tracking and responding to heat-related crises is a lack of reliable data on deaths and damage and no clear-cut start and finish to such events, unlike a tornado or flood.

“It’d be hard to pinpoint an exact moment when you were impacted by the heat,” said Paul Iñiguez, a science and operations officer with the Phoenix office of the National Weather Service.

Indeed, NWS’ own numbers showed just 108 heat-caused deaths in the U.S. in 2018 – compared to the 119 reported by Maricopa County alone. And the weather service’s number differs from those reported by the Arizona Department of Health Services, which said there were 130 “heat-caused” deaths in the state in 2018 and another 251 “heat-associated” deaths.

Iñiguez said his agency relies on records from the cause of death on death certificates, which can vary by county.

Heat is often a contributor to sickness and death, but is rarely the principal cause. Deaths caused by heat may go unlisted – exposure causes more noticeable conditions, said David Hondula, a researcher at Arizona State University.

Hondula said state emergency management officials he’s spoken with are unsure how heat fits into their operations. The same, he said, may apply to FEMA.

What’s undisputed is that heat, unlike other disasters, is a “chronic hazard” and that heat-related illnesses and death remain a silent threat – particularly in a state like Arizona.

“We have some danger to public health associated with heat almost every day in the summer,” Hondula said.

With nearly 1,300 heat deaths between 2006-2018, Maricopa County accounts for some of the highest figures in the state.

Hondula said the county’s surveillance system one of the more advanced in the country, and that other areas’ numbers are most likely underestimates of death counts. But scientists, he said, are trying to analyze all mortality records to “tease out” the effects temperature may have.

“When researchers have taken that approach, Phoenix bears comparatively well to other cities,” he said. “The attributable fraction of death to heat here is lower than many other cities in the United States, which is especially surprising given our climate.”

The government defines extreme heat as two or more days of high humidity and temperatures above 90 degrees, which can threaten vulnerable groups such as the elderly, children and people already suffering from medical conditions. But temperatures in Maricopa County pass 100 degrees Fahrenheit around 110 days annually, according to the county’s website.

Because of that, Iñiguez said, the NWS does not issue heat alerts in the Valley as often as an office in another part of the country might.

“We’re kind of picking out the highest of the high temperatures for locations” in the West, Iñiguez said.

Heat intervention both at the city level and in Maricopa County has fallen to local and state entities, as well as nonprofit organizations. Measures range from businesses handing out water bottles to providing temporary reprieve from the elements.

“This is the biggest public health crisis that we’re going to see,” said Stacey Champion, a public relations consultant in Phoenix. “What would potentially happen if or when the grid fails? What does that look like in the middle of summer in Phoenix, Arizona?”

In the hottest days in the Valley, businesses become shelters from oppressive heat. More than 200 facilities or businesses in the metropolitan area serve as hydration and/or cooling stations. Participating groups are part of the county’s Heat Relief Network, which was formed after extreme heat in 2005 killed 45 people that summer.

Hondula said thousands of people visit the centers during the summers, while the cooling center network also distributes some 250,000 water bottles in the county.

“It’s some indication that there’s some need that’s being met through these facilities,” Hondula said.

He called the responses the region’s climate of heat a “hodgepodge” of programs, fueled by an obligation to experiment with solutions.

“We certainly know that heat occurs regularly and predictively here, which gives us a lot of opportunities to experiment. So I think this makes sense as a place to be testing interventions,” Hondula said.

Bahr, of the Sierra Club, said cooling stations are a step in the right direction, but only so effective after businesses close. She called for longer-term solutions, like including trees to shade urban areas and minimizing heat radiating from asphalt and concrete.

“I think those all have to be part of the solution if we’re going to have livable communities,” she said.

Sean Sublette, a meteorologist with Climate Matters, said the city and state alike must consider the fuel it puts into the air.

“Solar energy and the use of solar energy is probably one key component solution,” he said. “That would be my first thought.”

Despite the challenges, Hondula said there are some things going right in the Phoenix area.

“Do we have a problem? Yes. Are there more cases than we want to see? Yes. Is there a lot of room for improvement? Yes,” he said. “Are we doing relatively well compared to other cities across the United States handling this problem? Yes.”

January 2020 was warmest January in 141 years of records, NOAA says Clean energy produced on Navajo land could help power Los Angeles Don't count on warm weather to ease coronavirus spread, says biologist
By posting comments, you agree to our
AZPM encourages comments, but comments that contain profanity, unrelated information, threats, libel, defamatory statements, obscenities, pornography or that violate the law are not allowed. Comments that promote commercial products or services are not allowed. Comments in violation of this policy will be removed. Continued posting of comments that violate this policy will result in the commenter being banned from the site.