Two conservation groups have filed suit over what they say is the failure of the federal government to protect the Sonoran desert tortoise. by Ariana Brocious Tweet 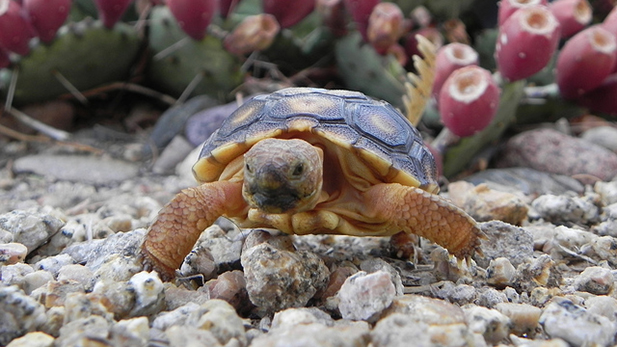 Nine years ago, the U.S. Fish and Wildlife Service determined the tortoise was a species worthy of protection under the Endangered Species Act. Cyndi Tuell, Arizona and New Mexico director with Western Watersheds Project, says the agency reaffirmed that decision for several years and was preparing the formal listing process under the Endangered Species Act when it suddenly reversed that decision in 2015.

The lawsuit filed by Western Watersheds Project and WildEarth Guardians challenges that 2015 finding that the species doesn’t deserve federal protections.

"We hope that the Fish and Wildlife Service will come to its senses and look back at all the science they’ve collected since 2012 and before and realize that the situation for the tortoises has gotten worse, not better, and that they are still a priority species for listing under the Endangered Species Act," Tuell says.

Tuell says the agency is relying on insufficient scientific data to evaluate the species extinction threats and hasn’t provided good rationale for that change of course. The lawsuit asks the court to set aside the 2015 decision and apply the best science available to provide protection for the species.

UA researchers warn of time frame for species extinctions Scientists recognize new fish in northern Mexico The Buzz: Dealing with Arizona's PFAS problem
By posting comments, you agree to our
AZPM encourages comments, but comments that contain profanity, unrelated information, threats, libel, defamatory statements, obscenities, pornography or that violate the law are not allowed. Comments that promote commercial products or services are not allowed. Comments in violation of this policy will be removed. Continued posting of comments that violate this policy will result in the commenter being banned from the site.