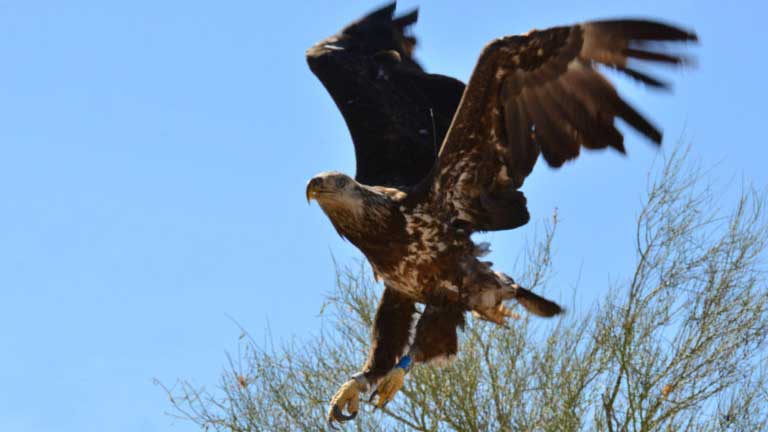 VIEW LARGER A juvenile bald eagle flies away after being released at Horseshoe Lake in June 2019.
Arizona Game and Fish Department

PHOENIX — The number of new bald eagles in Arizona has dipped from last year despite more breeding areas.

The population of nestlings — birds too young to leave the nest — dropped from 87 last year to 71 this year.

Kenneth Jacobson, bald eagle management coordinator for the Arizona Game and Fish Department, said such slowdowns are not uncommon and that expanded breeding areas suggest a strong population.

Since receiving endangered status in 1978, adult breeding pairs in the state have expanded from 11 to 74.

Though no longer listed as a protected species, the birds still are shielded by federal law.

Groups say border wall construction threatens biodiversity of Arizona sky islands Supreme Court DACA decision looms over thousands of Arizonans Arizona Legislature plan to end session hits roadblock
By posting comments, you agree to our
AZPM encourages comments, but comments that contain profanity, unrelated information, threats, libel, defamatory statements, obscenities, pornography or that violate the law are not allowed. Comments that promote commercial products or services are not allowed. Comments in violation of this policy will be removed. Continued posting of comments that violate this policy will result in the commenter being banned from the site.