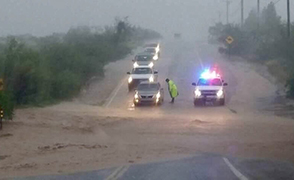 A Tucson police officer stops motorists from crossing a flooded wash on the east side.
Courtesy: Tucson Police Department

The Tucson Police Department stationed officers at some roads to remind drivers not to enter flooded areas.

The storms were expected to continue through Wednesday, said Dan Leins, a meteorologist at the National Weather Service Tucson office.

“The bottom line is we’ve got a lot of showers across the area, a lot of water in places where it’s not usually," he said. "It’s a good day to either stay inside or at least be aware of the weather and keep a head’s up on what’s going on.”

The ground is saturated from the rainy week, he said. 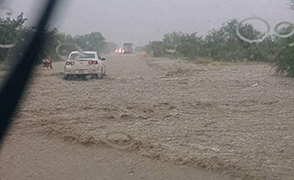 The ground cannot absorb more water after more than two inches fell in some parts of town, Leins said.

“When you’ve been in a pretty dry period like we were, the ground can absorb some degree of rainfall," he said. “When we’ve had this much rain it’s not uncommon to see a lot of it just run right off.”

Those who prefer the hotter, drier part of monsoons will have to be patient.

"There is going to be a gradual drying trend," Leins said. "It’s just going to take a day or two to get there.”

Beyond that, it’s hard to predict what the rest of the monsoon will bring, he said.

Record High Temps Expected Thursday, Friday in Tucson Rain Subsides, But Flooding, Dangerous Conditions Ongoing Alternatives to Flood Irrigation Taking Hold in Pinal
By posting comments, you agree to our
AZPM encourages comments, but comments that contain profanity, unrelated information, threats, libel, defamatory statements, obscenities, pornography or that violate the law are not allowed. Comments that promote commercial products or services are not allowed. Comments in violation of this policy will be removed. Continued posting of comments that violate this policy will result in the commenter being banned from the site.