Tucson Recorded 1.59 Inches of Rain in June, Second Most 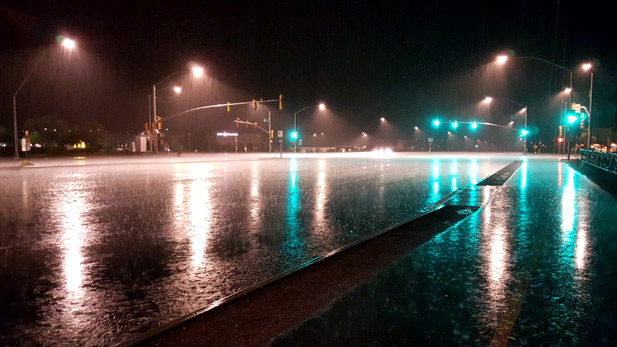 Monsoons hit Tucson at the end of June, dropping near-record amounts of rain.

The record for rain in June came in 1938, when Tucson received 2.07 inches of rain, National Weather Service records show.

The Tucson area has seen more than an inch of rain in June one other time in the past 30 years. The area received 1.56 inches of rain in June 2000, weather service records show. But it is not just the total amount of rain that made June 2016 atypical.

"Some of our rainfall events happened at night or in the early morning hours, and that's a little bit unusual," said National Weather Service Meteorologist Glen Lader. "But with so much moisture coming in and the atmosphere being very wet, it didn’t take much in the way of an atmospheric disturbances to help kick of rain during the night time.”

Lader said it is hard to predict much beyond that. Long range forecasts are showing mixed signals about what will come in the rest of the monsoon.

It's raining a little on the @UofA.campus... @nws #monsoon #weather pic.twitter.com/FwCsU5MNxT

Flash Flood Warning in Effect in Tucson Metro Area Tuesday Fire Officials Warn of Dangers With 4th of July Celebration Four Rescued from Rain-Swollen Wash in Tucson; No One Injured
By posting comments, you agree to our
AZPM encourages comments, but comments that contain profanity, unrelated information, threats, libel, defamatory statements, obscenities, pornography or that violate the law are not allowed. Comments that promote commercial products or services are not allowed. Comments in violation of this policy will be removed. Continued posting of comments that violate this policy will result in the commenter being banned from the site.