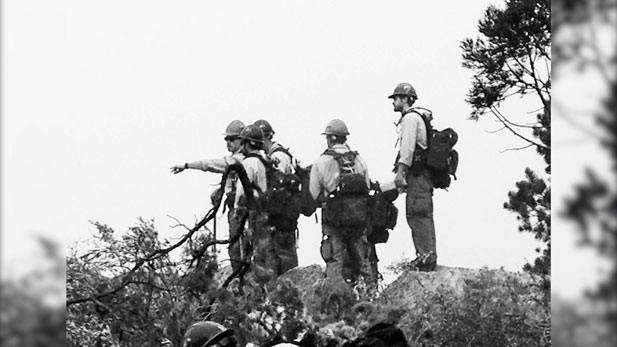 Brendan McDonough was on lookout duty June 30, 2013, as 19 other Granite Mountain Hotshot crew members worked the line to turn back a wildfire in Yavapai County.

McDonough says he doesn't recall anything unusual about how the day started in fighting the Yarnell Hill Fire. But by day's end, all was different. His 19 "brothers" were dead, overcome by the out-of-control fire that also destroyed hundreds of houses in Yarnell and burned vegetation off thousands of acres.

McDonough, now 24, wrote My Lost Brothers to recount the day and its aftermath. He discusses his book, the fire, the loss of his companions and more on Arizona Week Friday.

Also on the program, New York Times Phoenix bureau chief Fernanda Santos discusses her book, The Fire Line: The Story of the Granite Mountain Hotshots and One of the Deadliest Days in American Firefighting.

Arizona Honors 19 Firefighters Killed by Flames 5 Years Ago Wet Winter Stocks Fuel for Fire Season in Southern Arizona Forest Service Gets OK to Seek Seasonal Firefighters, Despite Federal Hiring Freeze
By posting comments, you agree to our
AZPM encourages comments, but comments that contain profanity, unrelated information, threats, libel, defamatory statements, obscenities, pornography or that violate the law are not allowed. Comments that promote commercial products or services are not allowed. Comments in violation of this policy will be removed. Continued posting of comments that violate this policy will result in the commenter being banned from the site.