× CORONAVIRUS: The latest coverage and local resources regarding COVID-19 from the Arizona Public Media newsroom.
June 16, 2016 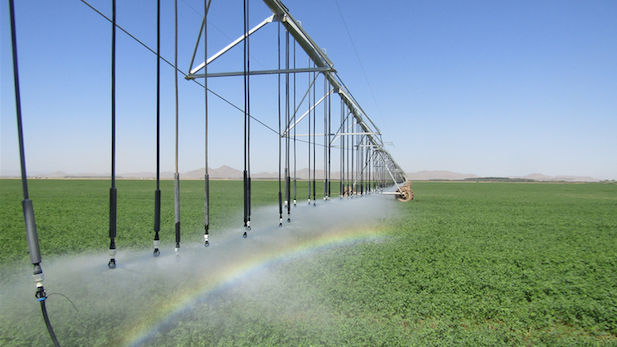 “And now we’re starting to move toward sprinkler irrigation and drip irrigation, as a matter of just conserving water," he said. "Plus it’s much more efficient and yields are increasing.”

Most Arizona farmland still uses flood irrigation. Coester said the reason farmers are reluctant to switch is that installing new systems is expensive, sometimes up to $1,000 more per acre.

Alyssa Garcia, a young member of the tribe and former Miss Indian Arizona, works on the Ak-Chin farm for the summer. She said carrying on the old farming traditions with new technologies is important to her.

“We’ve been able to really allocate our water and use it as efficiently as we can because it is a sacred resource to us,” Garcia said.

Garcia works with Leona Kakar who flipped through a copy of the water rights settlement between the Ak-Chin and the federal government, which she fought for in 1983.

“I think there’s just two of us still alive,” she said, looking for the short list of signatures on the settlement in which she was included.

And then, she wouldn’t budge on asking for 50,000 extra acre-feet of water to be guaranteed by the federal government. She said negotiations were tense.

“Oh we waited, and we waited, I was getting so nervous and one of them said, 'Well, we’ve discussed this, and we’ve decided and we’ll go ahead and give you the 50,000 extra,'" she said. "Oh, I was so relieved!”

That boost allowed the community to go from 3,000 to 15,000 acres of farmland, including corn, pecans and cotton.

Down the street from Ak-Chin, at the U.S. Department of Agriculture Arid Land Agriculture Research Center, scientist Kelly Thorp is studying exactly how much more efficient the sprinklers are.

“We have a diesel engine on board this little cart, running a pump, pulling water out of the canal and delivering it up onto the top pipe running along the lateral above us,” Thorp said.

He was standing in a field being irrigated with an high-tech overhead sprinkler system. As the little green cotton sprouts grow, he will measure whether there will be more crop with less water.

For the next generation of crops, these findings could be crucial because of water restrictions.

“Right here in Pinal, I think people are going to get their water cut back next year. Unless something changes, you know,” Coester said.

After 50 years working and managing the farmland, Kakar is ready to turn over the reins. “I’ve done my part, from the ground up," she said. "I did my part getting water here.”

In a university study, sprinkler irrigation in California has had positive results on almost every crop tested. So the Ak-Chin community may be ahead of the game when it comes to efficient crop watering in Arizona.

University Group Launches Water Purification Project for Native American Community Weather Service: More Rain Soon, Drying Out by Week's End Agriculture Act Restores Disaster Aid to AZ Ranchers
By posting comments, you agree to our
AZPM encourages comments, but comments that contain profanity, unrelated information, threats, libel, defamatory statements, obscenities, pornography or that violate the law are not allowed. Comments that promote commercial products or services are not allowed. Comments in violation of this policy will be removed. Continued posting of comments that violate this policy will result in the commenter being banned from the site.