Sensors, Signs: System to Warn I-10 Drivers of Dust Storms

Electronic monitoring will take place along a 10-mile stretch between Eloy and Casa Grande. by Zachary Ziegler TWEET SHARE 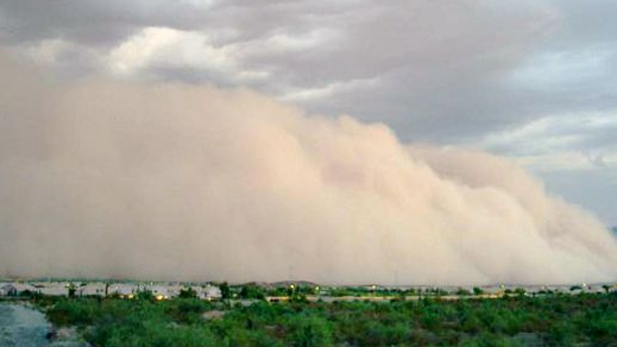 The Arizona Department of Transportation will install a dust storm warning system on Interstate 10 in Pinal County north of Tucson.

Electronic sensors will be placed along a 10-mile stretch of road from milepost 209 to 219, a place where numerous multi-vehicle crashes and fatalities have occurred because of low visibility from blowing dust.

The sensors will detect poor conditions as they form and alert motorists via overhead electronic signs.

“What we obviously want to do is to get people to slow down, to get off the freeway if they can when they see a dust storm – all of the things we’ve been asking them to do. This would just give them warning in advance,” said ADOT's Tom Hermann.

Warnings will be delivered to drivers as far away as Tucson and Phoenix.

If conditions are severe enough, the system will also reduce speed limit postings to as low as 35 miles an hour.

The system will cost nearly $13 million, and will be paid for through a federal grant the state received in September.

State Launches Dust Storm Safety Campaign Groups Work to Reduce Blowing Dust Risk on I-10 ADOT Begins Work on System to Detect Dust Storms on I-10
By posting comments, you agree to our
AZPM encourages comments, but comments that contain profanity, unrelated information, threats, libel, defamatory statements, obscenities, pornography or that violate the law are not allowed. Comments that promote commercial products or services are not allowed. Comments in violation of this policy will be removed. Continued posting of comments that violate this policy will result in the commenter being banned from the site.